Muleriders rally to beat Bisons on the road 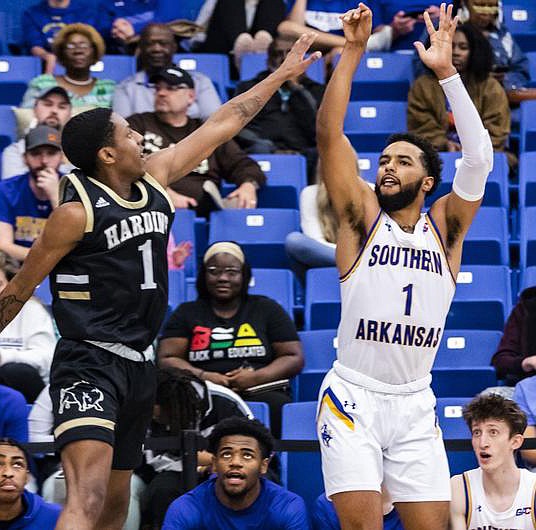 SEARCY - Southern Arkansas responded on the road in a tough environment to move to 8-2 in Great American Conference play. The Muleriders rallied from a 13-point halftime deficit to top Harding 82-75 on Saturday to improve to 12-4 overall.

Harding's lead grew to 17 points in the first 70 seconds of the second half, but momentum would begin to shift after senior Kris Wyche hit the first of three second-half trifectas at the 17:39 mark to jumpstart a 21-7 SAU run that ended with the Muleriders gaining a 53-52 lead following another triple try by Wyche.

SAU shot it much better from three-point range in the second half sinking seven of its 13 attempts; five more in the same amount of first half attempts. Additionally, SAU's perimeter defense clamped down to hold Harding to just one make in nine second-half attempts from deep.

The Bisons would regain the lead momentarily, but a three-point make from Gregory Hammond Jr. put the Muleriders up 56-54 and Harding would not lead again.

Brock Schreiner connected on the second of two free throws to give the Muleriders the lead for good at 57-56 and the senior guard would follow with an old fashioned three-point play before assisting on a Carel Ray Jr. triple try as SAU moved up 63-58

Harding closed the deficit to three at 65-62 with 4:29 remaining, but SAU put together a 10-4 run over the next 2:15 of play to lead by nine. A pair of free throws from Jerry Carraway Jr., a freebie by Hammond Jr., Wyche's third and final triple try and an athletic drive to the basket on an up-and-under by Schreiner staked SAU to an advantage it would hold onto late.

The Muleriders squared off against UAM Monday night and will travel to Oklahoma Baptist on Thursday.

Southern Arkansas women suffered their largest GAC loss of the season as they were outscored 82-56, falling to 7-9 overall and 3-7 in league action.

Harding went on multiple runs in the game where they capitalized on their defensive ability to stunt the Lady Muleriders. The Lady Bison started off the game with one of said runs that allowed an early 15-4 Harding lead.

SAU bounced back with three made threes from Linzy (2) and freshman Riley Stanford. The Lady Muleriders found themselves down seven points in the first quarter before senior Jessica Jones landed a jumper with two seconds to go to cut the Lady Bison lead to five points entering the second quarter.

Harding capitalized on another huge run, scoring 14 points versus SAU's one during a four-minute stretch.

Morris eventually worked to offset a 17-point deficit they entered the second half with, putting up the first points of the quarter with a made three. Harding later took control and outscored SAU 9-2 to enter the final quarter up 22 points.

Harding gained a game-high lead of 30 points with three minutes left to play.

The Lady Muleriders also played at UAM Monday and will visit Oklahoma Baptist on Thursday.

Print Headline: Muleriders rally to beat Bisons on the road