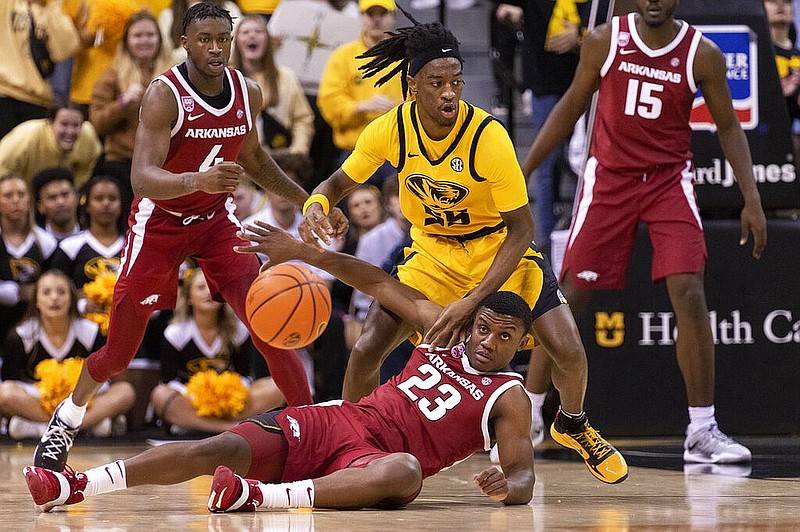 Davonte Davis scored 18 points and Ricky Council IV had 13 for Arkansas, which has lost four in a row. Anthony Black added 15 points for the Razorbacks (12-6, 1-5).

The Hogs will look to snap their four-game skid when they host Mississippi Saturday.

"In the last five minutes, which was crucial, I thought I heard a lot of great voices, great talk and great conversation between our players," Missouri first-year coach Dennis Gates said. "They said, 'don't panic, don't blink.'

It was a five-minute game."

Missouri closed the contest on a 22-9 run.

Brown hit a 3-pointer to tie the game 67-all. East sank two foul shots and Brown chipped in with a fall-away jumper to knot the game again 71-71.

"Having this game and snapping a losing streak in front of our home crowd, especially against a rival like Arkansas - it's big for us," Brown said.

Added Gholston, "The biggest thing in college basketball right now is the way you respond to things. The way we responded was to keep going, keep fighting."

The Razorbacks used a 16-4 run early in the second half to go in front. Black and Jordan Walsh punctuated the blitz with back-to-back slams. Walsh had 12 points before fouling out.

"I thought our competitive nature was at a high level," Arkansas coach Eric Musselman said. "We had critical turnovers around the rim and on the baseline."

The Tigers missed their first seven shots and got their first points on a jumper by Brown with 15:04 left in the half.

Arkansas took a 35-34 lead into the break on a 3-pointer by Davis with nine seconds left in the half.

The Razorbacks are not yet in panic mode even though they have dropped five of their first six SEC games. They got off to an 0-3 start last season in conference play and lost four of their first six in 2020-21. They managed to reach the Elite Eight each time.