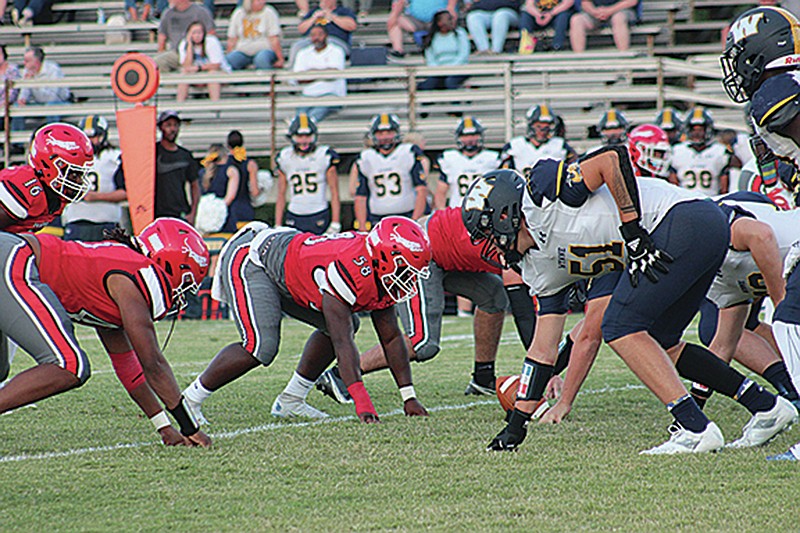 Magnolia's defense was the talk of the night as the fifth-ranked Panthers (3-0) dominated fourth-ranked Wynne (2-1) Friday at Panther Stadium.

"Wynne is a tough football team and we knew it was going to be a hard-fought battle. We made a difference by forcing some turnovers. I can't say enough about how hard our kids played," Magnolia head coach Mark King said following the 21-7 victory during the home opener. "We knew they had some ball security problems. We saw that on film and took advantage it."

King said Magnolia's defense, which "showed up and showed out, forced and recovered fumbles (three in the first quarter). The Panthers also forced the Yellowjackets to turn the ball over on downs twice.

Wynne was held to only 157 yards of total offense and seven points, compared to more than 500 yards and 72 points the previous week at Fort Smith Southside,

Following a scoreless first quarter, the Panthers got on the board at the 9:01 mark in the second off a 47-yard touchdown run by Dakota Dismuke. Braden Sanchez's PAT made it 7-0 with 9:01 on the clock. Magnolia squandered another opportunity to score after reaching the Wynne 19.

However, with 8:56 to play in the third, BJ Curry broke lose on a 32-yard scoring run to make it 13-0 following a missed PAT. Curry finished the night with 25 carries for 130 yards and two touchdowns.

The Yellowjackets put together a 12-play drive and closed the gap to 13-7 on a 3-yard TD by Colby Davis, who had 11 carries on the series.

The Panthers sealed the victory with Curry's second TD with nine minutes to play in the game. The senior's two-point conversion following the 6-yard score made it 21-7.

"Tonight, we didn't shoot ourselves in the foot. We didn't have any turnovers and I thought our defense played an outstanding game. I thought we were more physical than they were tonight," said King. "That team scored 72 points last week against a Class 7A team."

King also praised his offensive line, saying they had another outstanding game upfront.

"In the second half, we just drove the ball up and down the field. It was smash-mouth football," he added. Magnolia finished with 350 yards of total offense.

According to the coach, what his players do without the football is what make the Panthers go. He said that's what he shared with his team and the players are "buying" into it.

The Panthers will open 5A-South Conference play this week with a homecoming game against the Arkansas High Razorbacks.

"It's homecoming week and with that comes all the distractions. We will look stay focus and be prepared to face Texarkana," said King. "It's all about getting that first conference win."