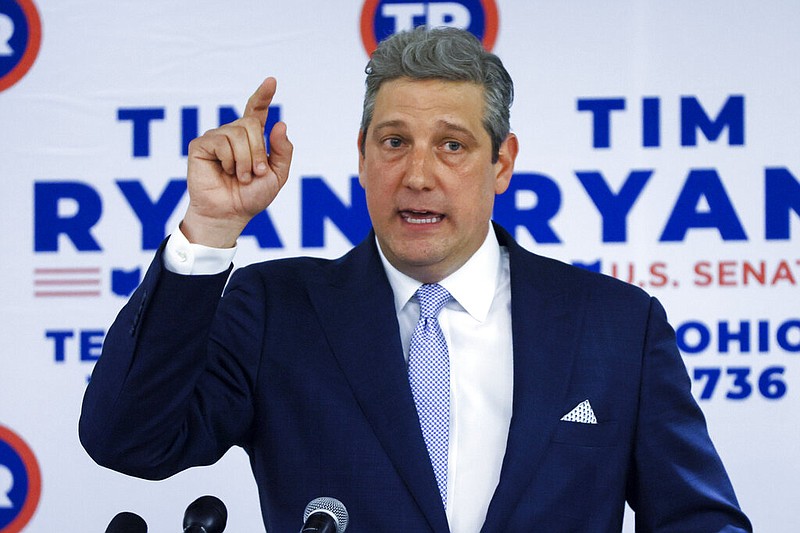 FILE - Rep. Tim Ryan, D-Ohio, running for an open U.S. Senate seat in Ohio, speaks, May 3, 2022, in Columbus, Ohio. Democrats running for office this year in Republican-leaning areas or swing states are grappling with how much they should talk about the Jan. 6 insurrection, if at all. (AP Photo/Jay LaPrete, File)

WASHINGTON (AP) -- Speaking last year on the House floor, Democratic Rep. Tim Ryan angrily bemoaned the lack of bipartisanship after the Jan. 6 Capitol insurrection and said Republican opposition to an investigative commission was a "slap in the face" to the law enforcement officers assaulted by then-President Donald Trump's supporters that day.

Ryan has trodden more carefully this year as he runs for the U.S. Senate in Ohio, a onetime battleground state that has trended rightward in the Trump era. At a recent debate, his Republican opponent, JD Vance, charged that Ryan has an "obsession" with the insurrection and called the Jan. 6 House committee's investigation a "political hit job" on Trump.

Ryan's cautiousness is a reflection of the political divide that remains nearly two years after the violent Capitol insurrection spurred by Trump's lies of a stolen 2020 presidential election. Many Republicans still falsely believe the vote count was rigged against Trump, and GOP lawmakers have repeatedly downplayed the violent attack, which left at least five people dead, injured more than 100 police officers and sent lawmakers running for their lives.

But some Democrats' reluctance to talk about Jan. 6 on the campaign trail is an acknowledgement that voters are primarily focused on pocketbook issues, like gas prices and rising inflation, in a midterm year that is typically a referendum on the president in power. That dynamic has created a delicate balance for Democrats, especially those like Ryan who are running in more Republican-leaning areas or swing states.

"The public sees this as something in the past, whereas they are dealing with inflation right now," says GOP pollster Frank Luntz, who has conducted focus groups on the Jan. 6 attack. If you can't afford to feed your family or fill your tank with gas, Luntz says, "arguing something that happened two years ago isn't prone to be high on your list."

Still, some candidates are betting that voters will care.

Independent Evan McMullin, a former Republican running against Utah Sen. Mike Lee, has made the issue a central part of his campaign. In a debate this month, McMullin said Lee had committed a "betrayal of the American republic" after it was revealed that the GOP senator had texted with White House aides ahead of the insurrection about finding ways for Trump to overturn his defeat. Lee demanded an apology, which McMullin did not offer, and noted that he had voted with most senators to certify Democrat Joe Biden's victory.

McMullin also appeared with Illinois Rep. Adam Kinzinger, one of two Republicans on the Jan. 6 panel, at an event in Salt Lake City. Speaking to an audience that included supporters carrying signs that read "Country First," the two men framed the midterms as a fight for democracy.

"If you're Mike Lee, it's still acceptable to say that Donald Trump is the future of the party and the leader of the party," Kinzinger said.

In a debate earlier this month, Rep. Elaine Luria, D-Va., defended her work as a member of the House Jan. 6 panel by saying it is "the most important thing that I have done or ever will do" professionally, beyond her military service. Her campaign later ran an ad showing footage of her opponent, Republican Jen Kiggans, refusing to say whether Biden was fairly elected.

In Wisconsin, Democrat Brad Pfaff is struggling against his opponent, Republican Derrick Van Orden, but is betting that more people will vote against Van Orden if they find out that he was among the Trump supporters outside the Capitol on Jan. 6. One Pfaff ad shows images of the violence and a veteran criticizing Van Orden.

Another ad in Wisconsin targets Republican Sen. Ron Johnson, who is running for reelection and has repeatedly downplayed the violence of the attack. "Ron Johnson is making excuses for rioters who tried to overthrow our government," a police officer says in the ad, paid for by Senate Majority PAC, which is associated with Senate Majority Leader Chuck Schumer, D-N.Y.

Democratic pollster Celinda Lake says that the democracy issue has proven salient among Democratic voters, particularly among older and suburban women who have less favorable views of Trump. "They are talking about it as a get-out-the-vote issue," Lake said.

John Zogby, also a Democratic pollster, agrees that the threat to democracy is a top-tier issue for many Democrats. But he has seen less interest among the independent voters who could decide the most competitive elections.

"I don't know that it gains any new voters for Democrats," Zogby says.

Like Ryan, the chair of the House spending subcommittee that oversees the Capitol Police, some Democrats who have been outspoken about the insurrection while in Washington have been talking about it less on the campaign trail.

New Hampshire Rep. Annie Kuster and Michigan Rep. Dan Kildee have spoken about their post-traumatic stress from being trapped in the House gallery as rioters tried to beat down the doors on Jan. 6. Now in competitive reelection races, neither has focused much on the attack or threats to democracy -- though both have occasionally mentioned it.

Kildee noted that police protected him that day in a debate against his opponent, Republican Paul Junge, as he spoke about his opposition to efforts to defund law enforcement. "People wearing uniforms saved my life on Jan. 6," Kildee said. "I know what the police can do."

Answering a question on support for Ukraine, Kuster said that she thinks the United States also needs to fight for democracy at home and that she is a "survivor, witness, victim of the insurrection on Jan. 6 in our Capitol."

Vermont Rep. Peter Welch, who was trapped alongside Kuster and Kildee and others that day, has chosen a different strategy as he runs for Senate in his liberal-leaning state. He talks about his experience often.

Asked about the committee's work in a recent debate, Welch told the audience that "I was there" and that it was a violent assault on the peaceful transfer of power.

"A big issue in this election is the American people coming together and fighting to preserve that democracy that has served us so well," Welch said.

His opponent, Republican Gerald Malloy, responded that criminals should be held to account but that Americans have a right to peacefully assemble.

"I am not calling this an insurrection," Malloy said.