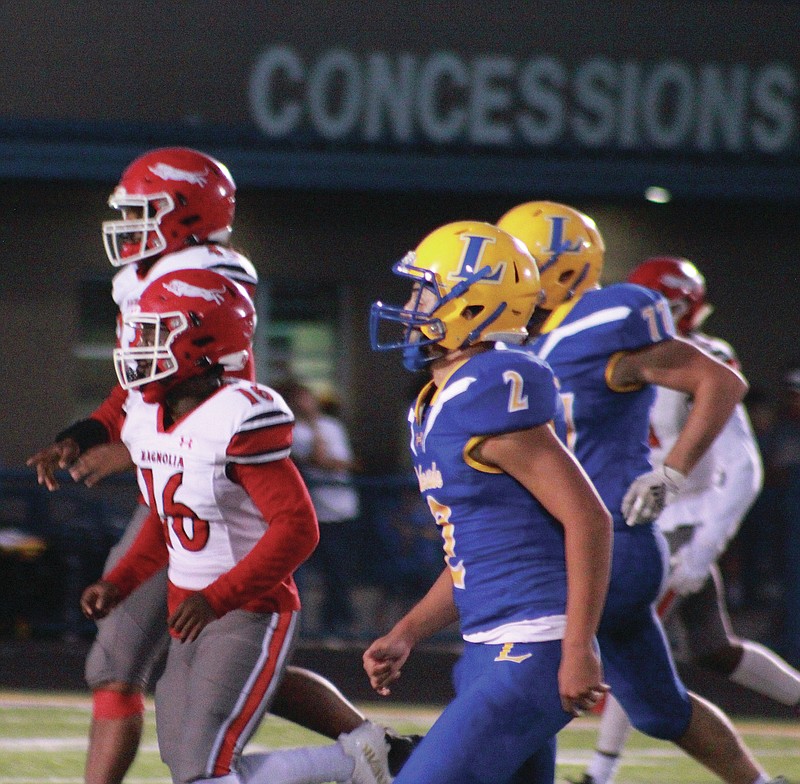 "We knew they could move the football, but I would have never thought I would come to Lakeside and they didn't run their bread and butter buck sweep at least one time. This is not a bad football team that has lost to three real good opponents this season," said Magnolia head coach Mark King.

The Magnolia coach said he felt his defense did pretty good considering the number of throws it had to defend.

"We intercepted two passes and returned them for touchdowns. We got a couple more turnovers. The kids played hard,"said King.

According to the Magnolia coach, his Panthers (5-0, 2-0 5A-South) needed to face a team that throws the ball alot. He noted that Camden Fairview, Hot Springs and Little Rock Parkview will throw the ball, but will be more balanced with a solid running game.

Lakeside's Jacob Hermosillo was 26-for-47 passing for 360 yards while Skylar Purifoy had 10 catches for 110 yards. Ben Vincent caught four balls for 150 yards.

Magnolia's BJ Curry had another solid night, rushing for 220 yards.

Curry got the game's first score on a 1-yard run and Magnolia quickly made it 14-0 when Jase Carter intercepted a pass and returned it 65 yards for a touchdown.

On the first play of the second quarter, Hermosillo threw a 30-yard touchdown pass to Landen Matthews, making it 21-14.

At the 6:09 mark in the second, quarterback Dalen Blanchard crossed the goal line from the 11, making it 28-14.

The second half belonged the Panthers as defensive back Devonte Dennis returned an interception 48 yards for a score. Braden Sanchez's PAT made it 35-14.

Following a touchdown pass by the Rams to close the gap to 35-21, the Panthers used a 10-play drive to go up 42-21. Blanchard scored from the 1, but. Curry had five carries on the drive.

Late in the third, Magnolia stretched the lead to 48-21 and scored again late in the game.

"Overall, I'm proud of the way the kids played. Our secondary got a bunch of work," said King.

Lakeside head coach Jared McBride said he was proud of his team following the loss.

"They played hard from the very beginning to the end and we're still trying to figure some things out, but I'm proud of our kids for playing hard and we've just got to give (Magnolia) credit," he said. "They're a really good football team. We tried to make some adjustments to come out to take advantage of some things in the second half. We turned the ball over too many times and gave up a couple touchdowns. But overall, I'm proud of our kids."