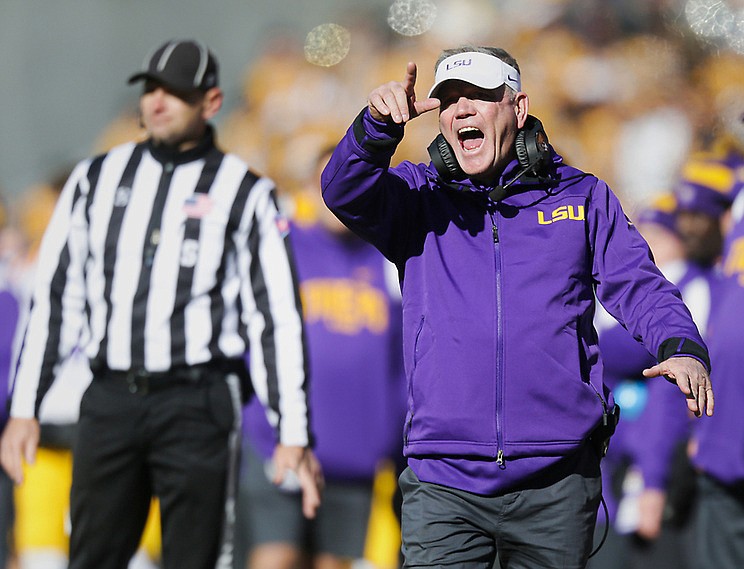 Less than a year ago, fans across the Southeastern Conference were mocking new LSU coach Brian Kelly for trying to talk Southern.

Josh Heupel's revival of Tennessee from the SEC depths to one of the nation's top teams in his second season has been impressive, but Kelly topped that by turning the Tigers from cellar dwellers into SEC West champions in his first year.

In the SEC, programs can jump from the basement to the college football penthouse in a matter of months by making the right moves.

"The resources here are better than anywhere that I've been in my career," Kelly said Wednesday. "And so those resources go to work right away in helping you develop your football program."

That's saying something considering Kelly spent 12 years at his last job at college football's most storied program. LSU was able to lure Kelly away from Notre Dame to arguably the sport's most competiive conference because the coach knew he'd be given exactly what he needed to win.

This has happened faster than even Kelly expected. The Tigers clinched a berth in the SEC championship game with two games remaining and will face defending national champion and top-ranked Georgia in Atlanta on Dec. 3.

The tranfer portal certainly helps coaches, not just in the SEC, restock a depleted roster quickly.

Kelly had 39 scholarship players available for LSU's bowl game a year ago. He needed to restock both his coaching staff -- only offensive line coach Brad Davis was retained -- and the support staff for a program that won both the 2019 SEC title and national championship.

"That would not have been a realistic expectation," Kelly said.

Heupel has Tennessee fifth in both The Associated Press Top 25 and the College Football Playoff rankings two seasons after the Vols went 3-7 in an SEC-only season that ended weeks later with the head coach and nine others fired for "serious" NCAA violations.

His scholarship players available also plummeted as Vols ran to the transfer portal, heading to other teams in the SEC like linebacker Henry To'o To'o to Alabama.

Tennessee (9-1) just finished its first undefeated record at Neyland Stadium since 2007 along with six straight sellouts, and Heupel credits fan support as a huge part of the turnaround.

"Obviously, when Neyland is rocking, it is unsurpassed by anybody," Heupel said.

Not winning quickly enough is cause for concern in this league.

That No. 1 recruiting class only ramped up the pressure to win at Texas A&M where a 3-7 record has fans wondering if Jimbo Fisher's buyout really is too big after his pricey extension last December. Eli Drinkwitz's own extension lowered his future buyout in case Missouri doesn't keep going to bowls.

Lane Kiffin, already mentioned as a candidate at Auburn or even Nick Saban's eventual successor at Alabama, made clear winning, not coming close, is the expectation these days at Ole Miss after last week's loss to the Crimson Tide.

"Two years ago, I walked off this field and I said we didn't come here to cover spreads, we didn't come here to play what at the time was the No. 1 team in the country close," Kiffin said. "So all these things about, 'Well, you did this good, your freshman running back,' it doesn't matter. We didn't win the game."

Shane Beamer took over a South Carolina program that went 2-8 in 2020. Now the Gamecocks are 6-4 and even climbed into the Top 25 earlier this season. Senior wide receiver Josh Vann says he's definitely proud of the steps this program has taken toward winning.

"From talking bad about us to two years later, we're literally the same team just with a different coach," Vann said. "It's just been fantastic. Last year we had seven wins. We have six this year so hopefully we can get these last two up. Definitely very proud of where we are, where we can be."

Florida gave Billy Napier a budget of $7.5 million for assistants and $5 million more to hire an "unprecedented support staff." The Gators at 6-4 have as many wins as they managed a year ago before hiring Napier last December as they prepare to visit Vanderbilt.

"I think the chemistry, the team dynamic, the morale is much better," Napier said of the culture he's building. "Obviously, winning helps that."

"Building a program is hard, and and you have to be able to stick with your process," Kelly said. "And he has, and they're starting to see that begin to pay off."

Still, as Kelly has reminded everyone, faster matters more in the SEC.