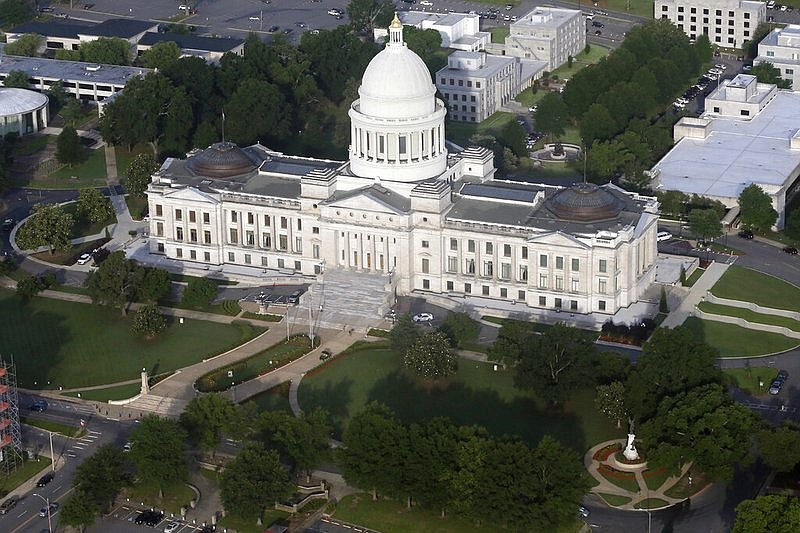 Arkansas Republicans will increase their supermajorities in both chambers of the state Legislature, unofficial election results from Tuesday night show.

With results from some races still outstanding, as of Wednesday evening Republicans were on track to add three to five seats in the Arkansas House of Representatives, bringing their total to 81-83. Democrats are on track to have 17-19 seats in the 100-member House, lower than their current total of 22.

Two races have yet to be decided -- House District 56 in Conway and House District 62 in southeast Arkansas. In the House District 56 race in Conway, Democrat Steve Magie was up by four votes over Republican Trent Minner. However, there are roughly 29 to 32 outstanding uncounted ballots, including overseas and provisional ones, according to Faulkner County Clerk Margaret Darter.

In House District 62, which includes Lee, Phillips and Desha counties and parts of Monroe County, Republican incumbent Mark McElroy was leading Democrat Dexter R. Miller with only 66.67 percent of areas reporting. The majority-Black district could be a major upset for Republicans or a key hold for Democrats depending on the final results.

Republicans will strengthen their majority in the House thanks to some key pick-ups, but missed out on picking up others. Republicans flipped House District 98, with Wade Andrews defeating incumbent Democrat David Fielding of Magnolia.

State Rep. Aaron Pilkington, the House Republican Caucus campaign chair, said he was pleased to see the GOP increase its majority, but that the lack of a "red wave" nationally for Republicans hindered the size of the Arkansas GOP's supermajority in the House.

While many predicted national Republicans would make big gains, results from Tuesday did not show the GOP wave some expected.

"I think we overperformed in rural areas and underperformed in urban areas, which is what Republicans did across the country last night," Pilkington said. "There are some races had the red wave materialized, it would have gone different for us."

For Democrats, Tuesday night's results were an affirmation of something already known -- that the state party has been decimated, despite controlling the House just a decade ago.

"The Democratic Party is seen as the party of Little Rock and Fayetteville and not the party of El Dorado and Russellville and Camden and Arkadelphia," Pilkington said.

Will Watson, strategic director for the Democratic Party of Arkansas, said some of the party's losses were due to gerrymandering, something difficult to overcome.

"In a cycle like this that was fairly unfriendly to Democrats in Arkansas and a lot of opposing forces nationally, to potentially only lose one incumbent seat, it's a starting place for a rebuilding effort," Watson said.

Democrats can find some solace in the fact that some key seats Republicans targeted did not fall. Democratic state reps. Ashley Hudson, David Whitaker, Jay Richardson and Andrew Collins fended off Republican challengers.

"If you look at the returns in west Little Rock, I think it's very clear that voters out here are very independent-minded and don't vote straight party ticket," Hudson said.

In Conway, some Republicans anticipated Minner would defeat Magie, an incumbent Democrat. As of Wednesday evening, that race is too close to call. The Faulkner County Election Commission is scheduled to meet at noon Monday to count the remaining ballots.

Both Magie and Minner said they felt optimistic about their chances and think the remaining ballots will break their way.

"I was pretty pleased with the result," Magie said. "You'd like it to be a better result than four votes, but we ran a good campaign."

"I feel optimist about [the election] and we'll let the process play out," Minner said.

In the state Senate, Republicans picked up two to three seats, leaving them with a potential 29-to-6 majority. State Sen. Jim Hendren, an independent, chose not to run for reelection. Republican Tyler Dees will fill the Senate District 35 seat in Northwest Arkansas instead.

State Sen. Larry Teague of Nashville, a Democrat, is term-limited and, due to redistricting, his southwest Arkansas seat is now a GOP stronghold.

State Rep. Reginald Murdock, a Democrat, was ahead of Republican Terry Fuller in the Senate District 9 race although some votes are still outstanding.