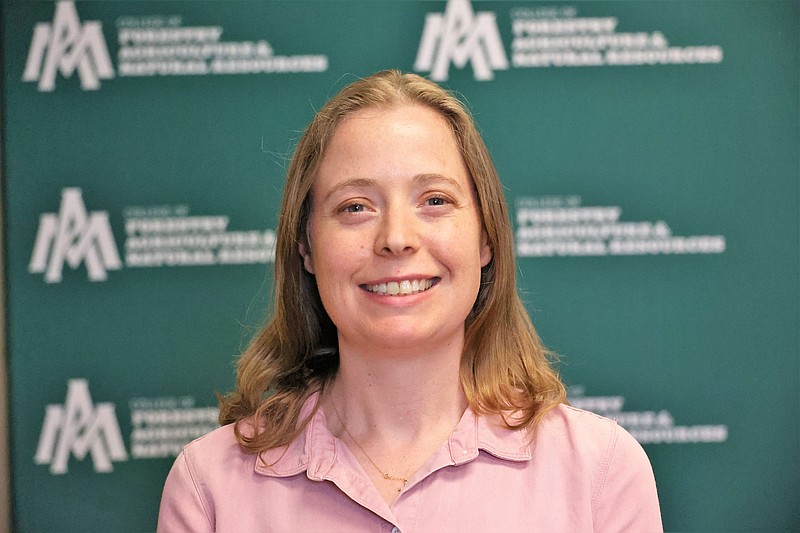 Monticello, Arkansas- "Soils are the basis of most agricultural production, but we tend to rely too much on the soil chemistry and how we can alter it to increase our yields. We need to pay more attention to the soil health, which includes the biology and physics of the soil too. Soil is more complex than we've been treating it," said UAM Assistant Professor of Agronomy Dr. Katy Bridges.

Bridges is the newest hire in the University of Arkansas at Monticello, College of Forestry, Agriculture and Natural Resources. She was hired as an agronomist to teach soil and crop production. This fall, she will begin teaching Introductions to Soils and Fiber and Oil Seed Crops, formerly taught by Professor Paul Francis, who retired in December. She will also work with the University of Arkansas Division of Agriculture with extension and research.

Bridges is currently collaborating on two grant proposals to do soil carbon research. One project focuses on biochar. Biochar is a product of pyrolysis, which is the process of burning pine bark or other raw products such as sorghum stalks or rice hulls at high temperatures without oxygen. The result is a charcoal-type product that can be re-introduced into soils to sequester carbon and potentially improve crop production. The other grant focuses on the carbon sequestration potential of changing land use from agriculture to bottomland hardwoods.

"I grew up in, Haynesville, LA, and I was a dedicated 4-H member from 4th grade to graduation," said Bridges. "While in 4-H, I raised livestock and participated in leadership projects. Originally, I had intended to become a veterinarian but became interested in ecology."

After receiving her animal science degree from Louisiana State University, Dr. Bridges attended the University of Georgia in Athens. There she received a masters in Conservation and Sustainable Development from the Odum School of Ecology.

"My research focused on forest mycorrhizal ecology," she explained. "Ecologists have a different perspective about agriculture than what I had been taught. I had to re-evaluate my own knowledge and understanding of conventional agriculture, which sparked my interest in soil health."

Upon completeing her degree at Georgia, Bridges went to work for the University of Tennessee Extension. She was the 4-H agent of Fayette County for three years before returning to Louisiana State University to pursue a PhD in soil sicence. "I learned a lot about teaching from my 4-H experience, but I wanted to pursue the science. My research focused on soil microbial ecology and soil health in pasture systems of southeastern Louisiana," she said.

Bridges spent a brief time working for a private company in North Carolina as a soil carbon specialist and for The Ohio State University as a postdoctoral scholar, doing on-farm soil health and soil carbon research in northeastern Ohio. There, she worked for the Carbon Management and Sequestration Center.

Bridges credits her mother and father for her interests in agriculture and teaching. Her mother is a chemistry instructor at Louisiana Tech University. "She reminds me of the importance of scientific integrity," said Bridges. She credits her father with her appreciation of the environment and agriculture. He was an extension educator (recently retired) for 30 years in both Louisiana and Arkansas. "They have both greatly influenced my life and still do. I learned the priceless value of hard work and a willingness to learn from them," she said.

About the College of Forestry, Agriculture and Natural Resources and the Arkansas Forest Resources Center

The University of Arkansas at Monticello and the University of Arkansas System Division of Agriculture offer all of their programs to all eligible persons without regard to race, color, sex, gender identity, sexual orientation, national origin, religion, age, disability, marital or veteran status, genetic information, or any other legally protected status, and are Affirmative Action/Equal Opportunity Employers.

About the Division of Agriculture

The University of Arkansas System Division of Agriculture's mission is to strengthen agriculture, communities, and families by connecting trusted research to the adoption of best practices. Through the Agricultural Experiment Station and the Cooperative Extension Service, the Division of Agriculture conducts research and extension work within the nation's historic land grant education system.

The Division of Agriculture is one of 20 entities within the University of Arkansas System. It has offices in all 75 counties in Arkansas and faculty on five system campuses.

The University of Arkansas System Division of Agriculture offers all its Extension and Research programs and services without regard to race, color, sex, gender identity, sexual orientation, national origin, religion, age, disability, marital or veteran status, genetic information, or any other legally protected status, and is an Affirmative Action/Equal Opportunity Employer.