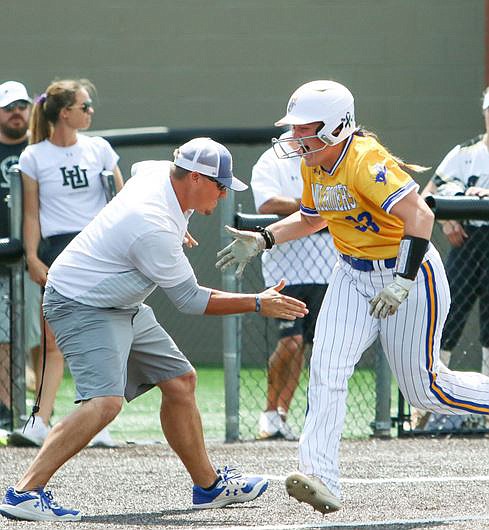 A five-run fifth inning was too much to overcome for the Southern Arkansas University softball team, as they took on Arkansas Tech in the Great American Conference Title game on Sunday evening at the Bentonville Tiger Athletic Complex. The Lady Muleriders fell 7-4 to finish as the runners-up in the GAC Conference Championship Tournament.

SAU, which advanced to the championship game by defeating OBU 5-1 and Harding 7-4, will play in the NCAA DII Central Region Tournament.

The NCAA announced the host sites for the DII Regional Tournament on Monday morning, and for the seventh time in program history SAU team earned a bid as the No. 7 seed and will head to Edmond, Okla., to compete in a four-team DII Central Regional. This is the sixth straight season that head coach Jason Anderson's team has advanced to the NCAA DII Central Regional Tournament.

SAU will open up with the No. 2 seed and host school Central Oklahoma University in their first round match up on Thursday afternoon at 1 p.m. Augustana University and Arkansas Tech University will be the other two schools competing at the three-day event that spans from Thursday to Saturday. Augustana comes into the tournament as the No. 3 seed, while ATU enters as the No. 6 seed.

In the GAC. title game, SAU jumped out to a 1-0 lead in the bottom of the second inning to draw first blood in the contest. Taylor Murphy singled up the middle, followed by a Mariah Hamilton double to left center field to push Murphy to third. Alyssa Miller was able to pick up an RBI as she singled to right field to score Murphy.

The Lady Muleriders were able to push two more runs across in the bottom of the third inning, as Jaxynn Dyson led the inning off with a solo blast to go up 2-0, followed by a deep double from Murphy that banged off the top of the fence to plate Alese Casper who reached on a single earlier in the inning. ATU was able to cut the lead to one as they posted two runs in the top of the fourth inning on a sac fly and a doubled to make it 3-2.

SAU's final run of the game came in the bottom of the fifth inning as Viviana Zarzoza came around to score on a wild pitch after entering the game as a pinch runner for Murphy who drew a walk. The Lady Muleriders led 4-2 as they entered the top of the sixth inning, but the Golden Suns were able to plate four runs on five hits to take a 7-4 lead heading into the bottom of the sixth. ATU was able to get out of a jam with a double play in the bottom of the sixth followed by three final outs without allowing a score in the seventh to earn the GAC Conference Tournament Title.

Jade Miller, Dyson, and Murphy all finished with two hits apiece in the ballgame. Dyson, Murphy, and A. Miller all had one RBI. Sydney Ward got the start in the circle and went 4.0 innings while allowing four hits, two runs and striking out five. Kiana Pogroszewski took the loss as she pitched 2.0 innings and allowed four hits and five runs (0 earned).