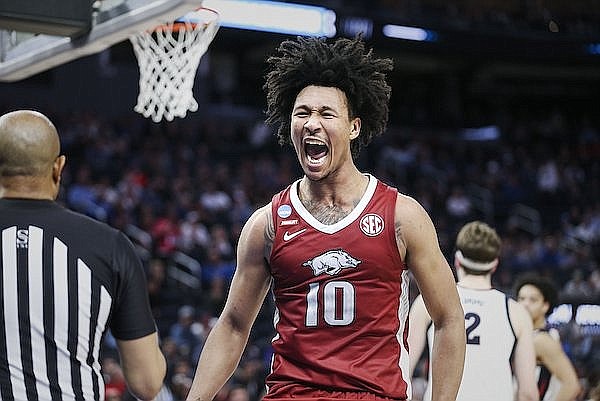 Each is a mobile big man with the ability to finish above the rim, with Duren and Williams as potential lottery picks, along with Kessler as a first-round prospect.

Here is a look at the top bigs in the draft:

The 6-11, 250-pound freshman is just 18 years old but has impressive athleticism and strength.

STRENGTHS: Duren has the solidly built frame to bang for position and the athleticism to finish lobs above the rim, making him ESPN's No. 10 overall draft prospect. He averaged 12.0 points and 8.1 rebounds, proving effective in attacking the rim and running the floor.

Duren also showed flashes of relentless rebounding ability by pulling down 20 rebounds against UCF in the American Athletic Conference Tournament and 19 against Western Kentucky in November. And he averaged 2.1 blocks.

"I've gotten better, my body has gotten better," Duren said. "And honestly I'm looking just to continue to develop throughout my rookie year, coming in being one of the younger draftees."

CONCERNS: He didn't shoot well in either of the team's NCAA Tournament games, including a 3-for-11 showing against potential No. 1 overall draft prospect Chet Holmgren of Gonzaga while being limited by foul trouble. His offensive game is still developing beyond the rim-running lobs and it's unclear what type of range he'll have. He also shot just 62.5% from the foul line.

The 7-2, 242-pound sophomore is an elite rim protector with mobility and an improving offensive game.

STRENGTHS: Williams offers incredible length, from a 9-9 standing reach to a wingspan of better than 7-6. That helped him rank 12th in Division I at 2.82 blocks per game while altering plenty more shots, so much so that now-retired Hall of Fame coach Mike Krzyzewski compared him to a hockey goalie during the NCAA Tournament.

Krzyzewski had also noted that Williams -- ranked as the No. 14 overall draft prospect by ESPN -- had improved his lateral movement, giving him a better chance to handle switches and ballscreens.

On the offensive end, he averaged 11.2 points with the ability to go up and get lobs for easy finishes.

"I'd say I'd bring to wherever I'd go just being that live threat: immediate rim protection, running the floor, playing hard, that sort of stuff," Williams said. "I think I bring that right away."

CONCERNS: The 20-year-old's offensive game is still in development. He showed more back-to-the-basket improvements last year, but there's still room to grow. He could also improve as a rebounder after averaging 7.4 boards with double-figure outputs in only 12 of 39 games despite his size.

The 7-1, 256-pound sophomore is another elite shot blocker and top defender with mobility.

STRENGTHS: ESPN's No. 26 overall draft prospect was named national defensive player of the year by Naismith and the National Association of Basketball Coaches after ranking second in Division I by blocking 4.56 shots per game, including nine games with at least seven blocks.

Kessler offers length (9-5 standing reach, better than 7-4 wingspan) and has shown mobility to pursue the ball and switch on perimeter.

Offensively, averaged 11.4 points while shooting 60.8% from the field to go with 8.1 rebounds while playing alongside potential No. 1 overall pick Jabari Smith.

CONCERNS: Kessler's shooting touch didn't show up in two college seasons, the first coming at North Carolina. Kessler shot just 57.7% at the foul line in two seasons while also hitting just 10 of 50 (20%) on 3-pointers last season with the Tigers.

"If Walker came back to Auburn next year, he's have looked a lot more like Jabari Smith from the standpoint of (being) that aggressive taking those shots," Auburn coach Bruce Pearl said Tuesday. "I hope that as he gets in and transitions to the NBA that that's what will happen for him at that next level as well."

-- JAYLIN WILLIAMS: The 6-10, 237-pound sophomore helped Arkansas reach an NCAA regional final, playing with energy and an all-around ability to score, pass, take charges and block shots. He had 16 double-doubles last season and could sneak into the first round as ESPN's No. 36 overall draft prospect.

-- CHRISTIAN KOLOKO: The 7-foot, 221-pound junior from Arizona is an athletic big man who can run the floor and block shots. He averaged 12.6 points, 7.3 rebounds and 2.8 blocks while improving as a free-throw shooter from 35% as a freshman to 73.5% this year. He's ESPN's No. 43 draft prospect, making him a likely second-round pick.

-- TREVION WILLIAMS: The 6-8, 265-pound senior helped Purdue claim its first No. 1 ranking in The Associated Press Top 25. Williams averaged 12.0 points and 7.4 rebounds, but also made a mark with his passing ability (3.0 assists). He's ESPN's No. 56 overall prospect and could be a second-round pick.