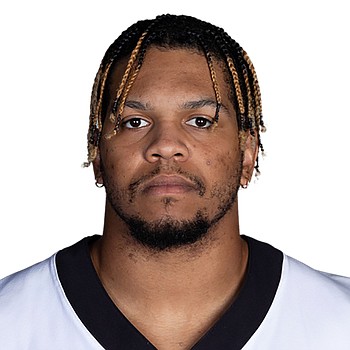 He appears to have accepted the partial loss of his pinky finger and ready to proceed with a career as a pass rusher that has shown considerable potential.

Indeed, the 2018 first-round draft pick looked more amused than bothered when asked in the locker room on Wednesday why he appeared to be missing much of his pinky.

"You're looking at a nub," Davenport said as he held his bandaged hand in front of him, allowing for closer examination.

Davenport, who did not practiced during last week's minicamp, has spent this offseason recuperating from right shoulder surgery and multiple offseason procedures on his pinky, which ultimately resulted in its partial removal.

Davenport said he does not expect the amputation to adversely affect his pass rush ability.

Recurring injuries and surgeries have left him with little and sometimes no mobility in the finger in recent years.

And there is precedent for a defensive end playing in a similar situation. Veteran Jason Pierre-Paul, currently a free agent, has played six NFL seasons since losing all or part of three fingers on his right hand in a fireworks accident in 2015.

Last season, the 6-foot-6, 265-pound Davenport had a career-high nine sacks, along with three forced fumbles and a fumble recovery -- despite injuries that limited him to 11 games.

Davenport said his repaired shoulder felt "strong." In fact, he had a loaded backpack slung over his right shoulder as he spoke.

He has had trouble with his left pinky since tearing ligaments in a bowl game in college at UTSA. His latest procedures on the finger this year came after he broke a plate inserted during a previous repair. That led to an infection which ultimately resulted in the amputation, he said.

But Davenport, an introspective, self-professed bookworm (he's now reading "Meditations," written by Marcus Aurelius while he was emperor of Rome nearly two millennia ago) doesn't feel sorry for himself.

Routinely being in medical facilities and seeing others who also need care gives him perspective on his relative robust condition and good fortune. Davenport has earned nearly $14 million in pro football and is scheduled to be paid about $9.5 million this season, when he'll turn 26 years old. He'll become a free agent in 2023 unless he and the Saints agree to an extension.

"After all this, I'm just happy to be alive," Davenport said. "I'm getting to know and be a part of the health care system way more, so I have a lot of appreciation."

Davenport is also expecting his third child -- his first daughter -- in July. He has two boys, ages 4 and 2, who Davenport said don't really understand their father is missing most of a finger but do ask if he has a "boo-boo" on his hand.

Davenport said that if one day he wants his children to appreciate some of the sacrifices he's made to provide for them, he might hold out his four-fingered left hand and say: "If y'all ever want anything, this was for y'all."