Gill, Hooks nominated for 2022 NCAA Woman of the Year Award 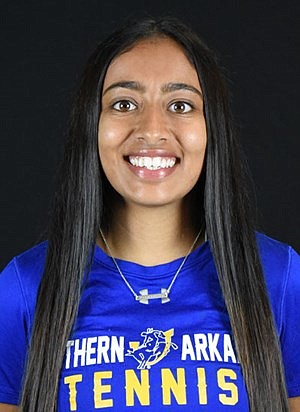 Established in 1991, the award recognizes female student-athletes who have exhausted their eligibility and distinguished themselves in their community, in athletics and in academics throughout their college careers.

Gill, a native of Wolverhampton, England, arrived at SAU in the fall of 2018, and graduated with a Bachelor's degree in General Business with a minor in Economics after being a member of the tennis team for the past four seasons.

Gill has been involved in numerous activities off the court, ranging from community service, campus activities, and leadership positions. Gill served as the president of the Student Athlete Advisory Committee during the 2021-2022 school year, while also serving as the President of Muleriders for Life and President of Business Student Advisory Council in the spring of 2022.

"Experiences shape individuals in so many different and unique ways. I am someone who has been so lucky to have had so many great experiences during my time at Southern Arkansas University. Not only did I have the privilege of playing and competing at a high level, but I also got the chance to influence the next generation that walk where I have been. Through many volunteer opportunities and community outreach events, I have been able to gain an insight on what a community means," said Gill.

Hooks excelled off the track and inside of the classroom, as she was name to the President's List on three separate occasion including, fall (2019), fall (2020), spring (2022), while being named in the Dean's list in the spring of 2020. She was named SAU's Most Outstanding Political Science/History/Geography Student of the Year in 2022.

On campus, Hooks served in the Student Government Association for three years, was the Vice President of Active Minds, was the Treasurer in the Pre-Law Club for three years, and helped out with the National Society of Leadership and Success when it came to social media and keeping the public informed. Hooks was also a President's Ambassador for SAU, while also serving on committee chairs in the HBCU for Life: A Call to Action Based Community Service and Women's Healthcare and Wellness Based Community Service.

"As a representative of your school and program, the spotlight that shines on a student-athlete is bright. Before COVID, I was an unsure athlete who did not believe in herself. While COVID did bring many hardships, it also brought time and perseverance. I learned that nothing stood between me and achieving my goals but myself; I worked hard while staying safe and returned to school ready to inspire others. As a leader and someone my coach relied on to observe, I made suggestions on weaknesses I saw in myself and others. I pushed them to be their best, and they pushed me. Being someone that my teammates sought advice from made me a confident, compassionate, and empathetic woman," said Hooks. 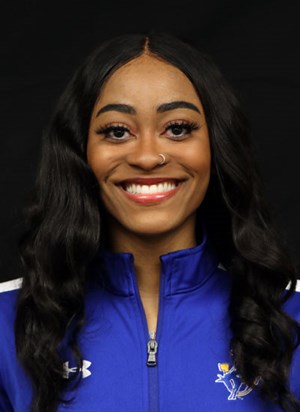