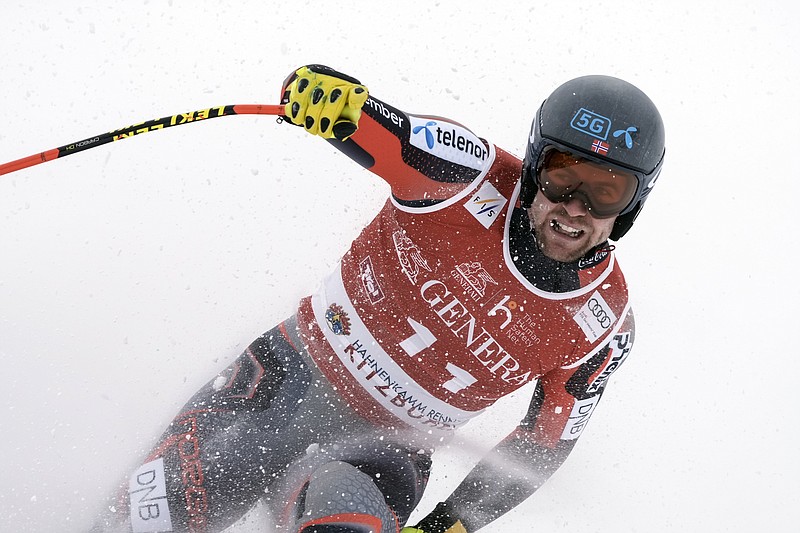 It was the Norwegian's sixth win in 12 speed events this season, and third in a downhill. He now leads both the super-G and downhill standings.

Kilde beat Johan Clarey by 0.42 seconds, while French teammate Blaise Giezendanner surprisingly made the podium in third as a late starter with bib No. 43.

Giezendanner finished 0.63 behind as he bumped Matthias Mayer off the podium by four-hundredths of a second. The two-time Olympic champion from Austria won the race two years ago.

"I didn't know I could be so fast in Kitzbühel," said Kilde, whose best result from six previous starts on the Streif was sixth in 2016.

Gusts high up on the mountain forced organizers to lower the start to the Mausefalle, leaving out the original steep start section and subsequent jump. It shortened run times by about eight seconds.

"The normal race here is a bit different, also with the spectators. But Kitzbühel remains Kitzbühel and I am very proud now," Kilde said.

Governmental anti-coronavirus measures in Austria allowed for 1,000 spectators, only a fraction of the usual crowd of 45,000.

Overall World Cup leader Marco Odermatt of Switzerland was fifth, 0.78 seconds behind. He was the last racer to finish within a second of Kilde's winning time.

"It was a super run, especially in the technical parts. There is still something missing on the flats," said Odermatt, who lost most of his time in the long gliding sections.

He still leads second-place Kilde by 335 points in the overall standings.

Kilde missed the classic downhill last year after sustaining a season-ending knee injury in training the week before.

"Standing here now just over a year after I had my knee operation it's quite incredible," said Kilde, "A lot of things have to happen for you to win and today was one of those days where I really had a good feeling."

Strong winds and light snowfall made for changing race conditions. It allowed several competitors to clock a faster time than Kilde at certain splits, but no one matched the Norwegian's consistency.

Kilde also mastered the Hausberg passage, where organizers had changed the course setting following a series of crashes in recent years.

The gates now forced racers to make a slight turn before approaching the traverse that leads into steep finish section, intended to lower their speed going over the final jump.

Clarey repeated his achievement from last year, when came runner-up to Beat Feuz.

"I didn't think that I could do it again. Maybe I can win one day but (Kilde) is too fast and too strong at the moment," said Clarey, who turned 41 this month and is the oldest skier to make a World Cup downhill podium.

After winning two downhills in one weekend in Kitzbühel last year, Feuz placed eighth on Friday, his worst finish in the race since 2017.

Giezendanner earned his best career result since finishing eighth in a super-G six years ago.

"Kitzbühel is the holy grail of downhill so I couldn't be happier," said the Frenchman, who finished 36th and 38th, respectively, in two downhills a week ago at another classic resort, Wengen in Switzerland.

Seeking his fourth career win on the Streif, Dominik Paris struggled throughout his run and shook his head after crossing the finish line.

The Italian, who led the downhill standings coming into the race, was more than two seconds off the lead in 27th.

Marcel Hirscher was one of the forerunners who test a course before the race starts. The record eight-time overall World Cup champion from Austria, who retired in 2019, never raced a downhill in his career.

"Kitzbühel was missing in my career," Hirscher said. "It's the fastest, most dangerous and most impressive downhill so I am grateful I could ski it today without pressure."

The traditional Hahnenkamm weekend also includes a slalom on Saturday and will be concluded with another downhill. Each race winner earns 100,000 euros ($113,000) from a record overall prize fund of 1 million euros ($1.13 million).