No. 1 Panthers blow past Billies; Star City Bulldogs are up next 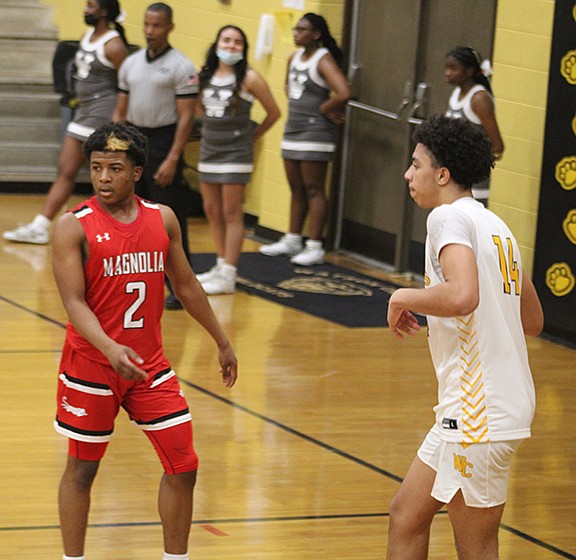 Top-ranked Magnolia raced out to an 18-0 first quarter lead and blew out Monticello 57-26 Friday night at Panther Arena.

"We came out pretty efficient on offense and defense. You can't ask for a much-better start than that," said Panthers' head coach Ben Lindsey. His team, ranked No. 1 in Class 4A and No. 6 overall, moved to 12-0 on the season and 3-0 in 4A-8 Conference play. The Billies slipped to 2-1 in league action and 5-6 overall.

"Monticello was missing some guys, but we had things going for us and they had things going against them," said the coach. "As a coach, you could just feel the wind get knocked out of their sails. You feel bad for them and we've all been there. I hated it for them."

It was Devonta Walker and Adrien Walker who gave Magnolia a 9-0 advantage during the first three minutes. A slam dunk by Derrian Ford and a 3-pointer by Nevi Tell made it 14-0.

D. Walker dunked the ball and Tell hit a short jumper before the period ended.

Monticello opened the second period with a 3-pointer and added another long range jumper following a second dunk by Walker.

Both Walker and Ford recorded slams in the third period as the Panthers led 49-22 when the buzzer sounded.

Ford led the Panthers in scoring with 18 points, while D. Walker added 13. Tell finished with 12 and A. Walker ended with seven. Keeiran Smith provided four points.

Tell wore No. 32 during the game in honor of the late Chris Strahan, who was a major influence in his life.

"It was the pre-anniversary of Chris' passing. Chris wore No. 32 and Nevi asked me if he could wear No. 32. I said sure. He will be back wearing No. 2 on Friday," said Lindsey.

Magnolia shook off a sluggish start and got its first conference win of the season.

The Lady Panthers stretched their lead to 18, 27-9, midway through the third period and led 30-11 at the buzzer following a late 3-pointer by Nyasia Davis.

Kelcy Lamkin and Be'aunca Willis hit 3-pointers during the final eight minutes as the Lady Panthers won by 37.

Twelve Lady Panthers scored in the game, with Lamkin leading the way with 10. Willis finished with seven, while Bracelyn Glover and Davis added six apiece.

The Panthers and Lady Panthers will host Star City Friday night, with the girl's game tipping off at 5:30 p.m.

Print Headline: No. 1 Panthers blow past Billies; Star City Bulldogs are up next