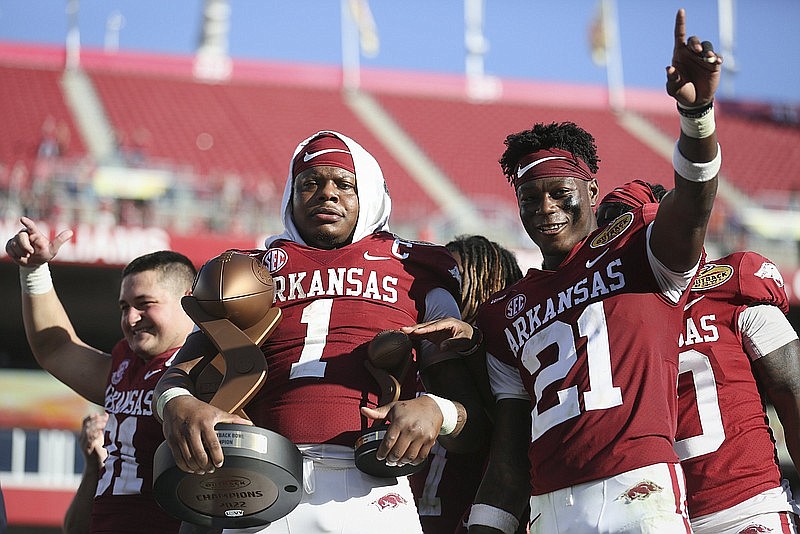 Arkansas quarterback KJ Jefferson (center), who was named the game’s Most Valuable Player, and teammates, including Grant Morgan (left) and Montaric Brown, celebrate their 24-10 victory over Penn State in the Outback Bowl on Saturday at Raymond James Stadium in Tampa, Fla. (NWA Democrat-Gazette/Charlie Kaijo)

TAMPA, Fla. -- The Arkansas Razorbacks kicked off the New Year the same way they ended 2021, by claiming another piece of hardware to put in their bulging trophy case.

The University of Arkansas overcame a sluggish first half by turning up quarterback KJ Jefferson and its dominating run game against the depleted Penn State defense to claim a 24-10 win in the Outback Bowl on Saturday before a crowd of 46,577 at Raymond James Stadium.

Arkansas (9-4) won five of its final six games and finished with nine wins for the first time since the 2011 team went 11-2.

Jefferson, the Outback Bowl MVP, led the way with 110 rushing yards and 90 passing yards to trigger the Razorbacks to a school bowl-record tying 361 yards on the ground.

Second-year Coach Sam Pittman accepted the Outback Bowl trophy, held it up and turned around to show it to the Razorback fans on the east side of the stadium, just as Jefferson had done with the MVP trophy moments earlier.

"We've got four trophies and we've got a picture in our stadium we're going to put this one in," Pittman told the crowd on the postgame podium. Just before he handed the microphone back to Outback Bowl officials, he hollered, "Now turn that damn jukebox on!" as Razorbacks fans roared.

Arkansas put a hiatus on several postseason trends that have chased the program through the decades while winning their first meeting against the Nittany Lions (7-6).

The Razorbacks notched their first win on Jan. 1 since a 27-6 victory over Texas on New Year's Day 2000 at the Cotton Bowl.

Arkansas also helped the SEC to a 3-1 record in bowl games against the Big Ten, after Georgia's 34-11 rout of Michigan in a College Football Playoff semifinal and just before Kentucky edged Iowa 20-17 in the Citrus Bowl.

Jefferson called the MVP win a dream come true and something he had talked about with Pittman before the game.

"I just turned around to show my family," Jefferson said. "Their supportive. They drove down here instead of flying. Just shows a lot about my support system. Also, the fans. They've been with me every step. Just having a crowd like that to support the Arkansas Razorbacks."

Jefferson spoke about the bowl win capping a turnaround for a program that had won two games in back-to-back years before Pittman's arrival, and seven games in three years.

"We've been through a lot over the past years going through a rough patch and now we're on the rise and on the come up," Jefferson said. "Everybody on the team took it as our national championship on this stage at the Outback Bowl in Tampa."

The four trophies were a huge incentive for the Razorbacks, who added the Outback Bowl Trophy to their collection of the Southwest Classic, Golden Boot and Battle Line Rivalry trophies.

"This season has been phenomenal for all of us," Arkansas linebacker Grant Morgan said. "The coaching staff, the fans, everybody. I know everyone wishes we could've won a couple more games, but it doesn't matter."

Arkansas safety Joe Foucha, who had an interception and a sack among his team-high six tackles, said Pittman talked about the four trophies every day.

"Once we got to two, then three, me and [John] Ridgeway made a song called 'Trophy Brothers,'" Foucha said. "Our plan was to come get a fourth trophy. ... That's what we did."

Penn State played without six players who declared for the NFL Draft and opted out of the bowl, which Pittman said made his respect grow for Penn State and Coach James Franklin.

Franklin didn't bring up his team's lack of depth but admitted it played a role in the outcome.

"You've got to give Arkansas credit," Franklin said. "We just didn't play well enough to get the win."

Arkansas tailback Dominique Johnson said running backs coach Jimmy Smith provided the incentive to challenge the Outback Bowl rushing record of 400 yards set by Wisconsin against Auburn in the 2015 game, and the Razorbacks made a run for it.

Florida native Raheim Sanders ran for 79 yards and a pair of short touchdowns in front a large contingent of friends and family. Johnson added 85 yards and backup quarterback Malik Hornsby added 67 on 4 carries.

"It just felt good being here, I'm not going to lie," Sanders said. "I thought playing at Arkansas I would get no games in Florida."

The Razorbacks trailed 10-7 at halftime after a shoddy second quarter. After building a 7-0 lead, the Hogs' defense missed an array of tackles and suffered a coverage bust that led to a 42-yard touchdown pass. The offense was out-gained 172-48 in the second quarter by the scrappy Nittany Lions.

The halftime talk centered around being behind by just three and needing to be more physical on both sides of the ball.

Offensive coordinator Kendal Briles had a special message for Jefferson.

"Coach Briles pulled me aside and said, 'At some point you've got to take over the game,'" Jefferson said.

Arkansas received the second half kickoff and unleashed a seven-play drive, all on the ground, and took the lead for good on Jefferson's 8-yard keeper up the middle.

"Obviously the biggest factor that stood out to me in the second half was the quarterback run game," Franklin said. "He broke tackles and from that point on we had a difficult time stopping the run."

The Razorbacks put a capper on things with a four-play touchdown drive on their next series. Jefferson started it with a 31-yard run on which he had his breath knocked out after falling on his back. Hornsby entered and had a 32-yard sprint around left end to set up Sanders' 1-yard score and a 24-10 lead.

Foucha stopped the next Penn State series with his interception in the end zone after linebacker Bumper Pool buzzed quarterback Sean Clifford and spun him around.

Arkansas tied its bowl rushing record with 361 yards, which was set 31 years ago in a loss to Tennessee in the Cotton Bowl. The Razorbacks had the bowl record before Hornsby, who had 67 yards on 4 carries against a tiring Penn State defense, took a couple of knees in Victory formation for 6 yards in losses.

"We felt like coming into the game that we were going to feature KJ and our running backs and our offensive line," Pittman said. "It wasn't going too good in the first half, but maybe the heat and things wore them down."

The first half was loaded with unfulfilled opportunities for both teams.

Penn State drove to the Arkansas 19 on the game's first possession, thanks to Parker Washington's 42-yard deep ball grab.

However, the Razorbacks got after Clifford with blitzes and forced a 13-yard intentional grounding on 3rd and 10. Jake Pinegar's 50-yard field goal try was short and right as the drive went for naught.

The Razorbacks similarly got in gear with their opening possession but couldn't scratch. Tyson Morris caught a 21-yard pass to convert 3rd and 9, then Dominique Johnson ran for 25 yards to the Penn State 21 on back-to-back plays.

On first down from the 11, Jefferson rolled right and fired toward Warren Thompson in the end zone. Thompson stood his ground and did not close on the pass, allowing safety Ji'Ayir Brown to undercut him and intercept. The pick ended Jefferson's run of 171 consecutive passes without an interception, the second-longest streak in school history.

Arkansas finally found its stride on its third possession with Florida native Raheim "Rocket" Sanders at tailback as he converted a 4th and 3 before rolling in for a 3-yard touchdown.

The Razorbacks owned the second half, racking up a 279-94 advantage in total yards, including 256-68 on the ground.