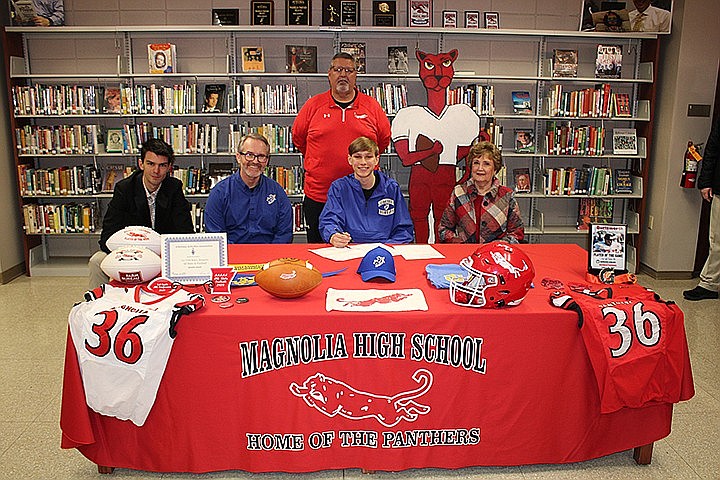 Senior Jay Todd Baker is one of the most liked students on the Magnolia High School campus and probably the best punter/place-kicker in Panther football history.

"He was a weapon for us," said Magnolia head football coach Mark King.

Though Baker could have furthered his academic and athletic careers at other universities, he said Southern Arkansas is "home."

"My family went there and I grew up there. That's why I chose SAU. Like their motto, I felt right at home," said Baker, a two-time All-Conference and All-State punter/kicker. "Coach Smiley is a great guy and I can't wait to be a player under him. I'm looking for an all around great college experience at SAU."

King said being in position to sign a college scholarship is a great accomplishment for Baker, who was last season's 5A-South Conference Outstanding Punter/Kicker. He was selected to the 2022 FCA Arkansas vs. Texas All-Star Game.

"He has had an outstanding career here at Magnolia High. He's done something you don't see that much in high school," said King, referring to Baker's 41.3 yards per game punting average.

In his career at MHS, Baker has scored 157 points and was 89 percent on field goals and PATs.

"That's pretty good. And I promise you that 90 percent of the ones that were missed was not Jay Todd's fault. There was either a bad snap or it was blocked, and I have the film to prove it," said the coach.

King said he had a good, but unique coach/player relationship with Baker.

"I'm old school and I was hard on Jay Todd at times. He took it and responded like no kicker I ever had," he said. "I don't know how many times he pinned teams inside the 20 off his punts. We won the Little Rock Christian game because Jay Todd turned the field."

King said the kicker was consistent throughout his high school career, which is why he's moving on to the next level.

Baker apparently fell in love with kicking around the age of 5 or 6 when his father (Carey Baker) was coaching at the University of Charleston in West Virginia.

"I use to go to practice with him and seems like I just started kicking. I began taking lessons around the 8th or 9th grade, and things went from there," he explained.

Since about the 9th grade, Baker attended the Ray Guy Kicking Camp each year. Guy, a member of college and professional football Hall of Fame, was drafted by the then Oakland Raiders out of Southern Mississippi. He is widely considered as the greatest punter of all time.

"I got to meet him one day. Anyway, my junior year, I went to the camp in Hattiesburg, Miss. I averaged the longest and had the farthest punt. For that, I received the camp's Gatorade Award," said Baker.

His longest field goal as a Panther was a 40 yards this past season against El Dorado, but he has nailed a 56-yarder in practice.

"I have a lot of room to grow, so that's why I want to get better every day," he said.

The kicker said that King has really turned the Magnolia football program around and is in tune with all the players.

"I wouldn't trade my experience here at Magnolia for anything," he stated.

Following the Harrison game two seasons ago, Baker was honored with the Brandon Bulsworth Award, which originated in Arkansas and given in recognition of a player's outstanding character, sportsmanship, and moral example to his team.

A former Arkansas Razorback walk-on, Brandon Bulsworth was selected by the Indianapolis Colts as the 63rd overall pick in the 1999 NFL draft. After mini camp, he was projected by his coaches to start as a rookie. Unfortunately, he was tragically killed in a head-on automobile collision just 11 days after the draft.

Baker was also twice named the Columbia County Farm Bureau Player of the Week for his outstanding performance on the field.

He thanked everyone for attending to the signing ceremony, adding he wouldn't be the person he is without them.

"I definitely thank SAU for allowing me to play football at the next level and to able to take the next step on my journey. I also want to thank Magnolia for the three years I got to play here. I am just blessed all around," he said.