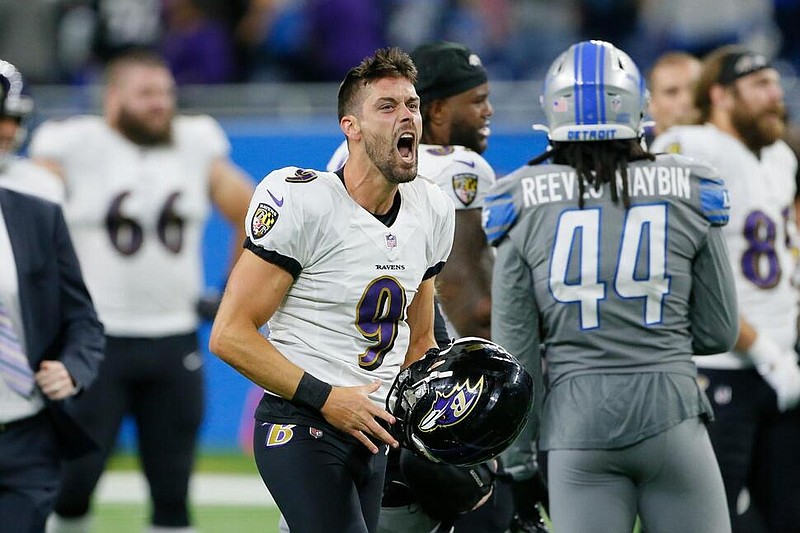 DETROIT (AP) -- Justin Tucker ended the game as if he was starting it, backing up an extra step or two and kicking the football with every bit of force he had in his right foot.

Tucker set an NFL record with a 66-yard field goal, bouncing it through off the crossbar as time expired to lift the Baltimore Ravens to a 19-17 win over the Detroit Lions on Sunday.

"That one was more like a kickoff," he said. "It's like you're a competitor in a long-drive contest. You just let it rip and hope it stays straight."

The kick topped the 64-yard field goal Matt Prater made for Denver against Tennessee on Dec. 8, 2013. Prater's attempt at a 68-yard kick for Arizona on Sunday fell short and was returned 109 yards for a touchdown by Jacksonville's Jamal Agnew, a former teammate in Detroit.

Lamar Jackson -- and perhaps a break from the officials -- made the record-breaking kick at Ford Field possible.

On fourth-and-19 from the Baltimore 16, he threw a 36-yard pass to Sammy Watkins to get the Ravens across midfield with 7 seconds left. The superstar quarterback spiked the ball to stop the clock, and on the next snap, he threw it away after TV footage suggested the play clock expired.

"We'll get an apology and it doesn't mean anything," Detroit coach Dan Campbell said.