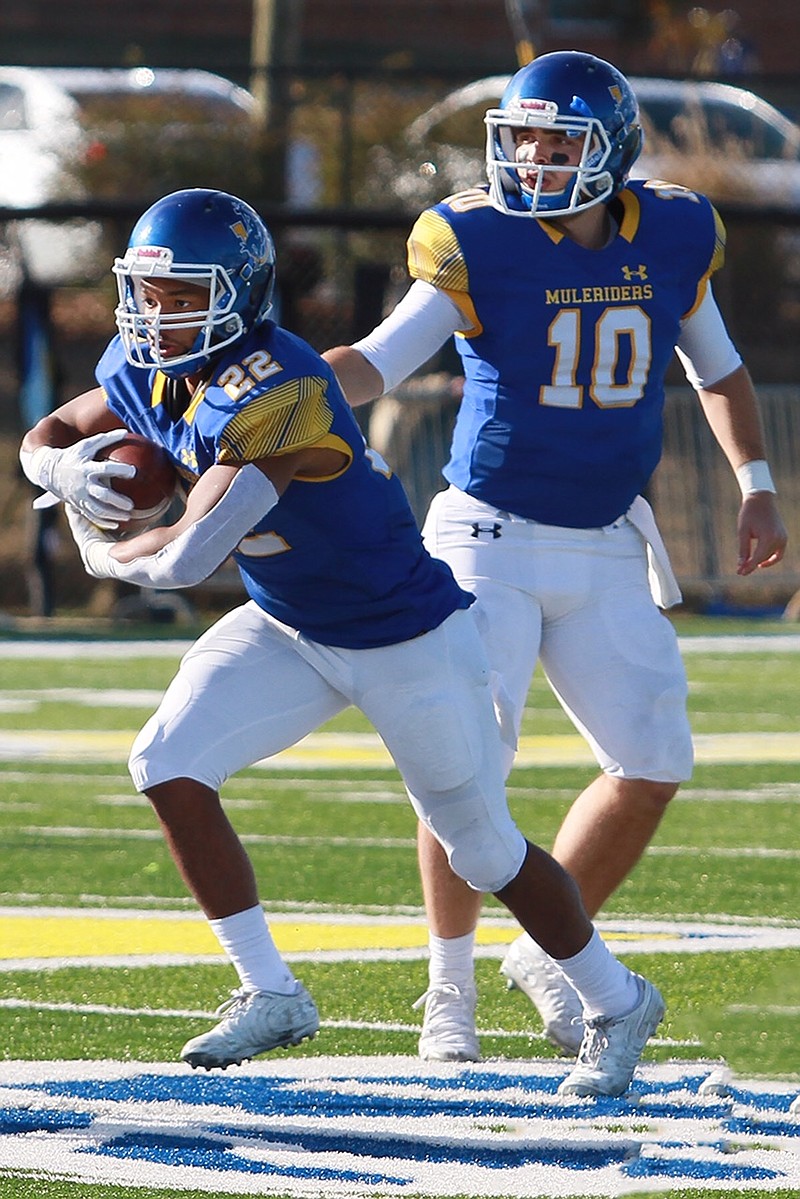 ALVA, Okla. – So much for the second-longest hiatus of football in the program's 104-year history, a first-year head coach calling the shots and a lengthy bus ride for a Thursday night kickoff having any ill effect on the Southern Arkansas Football team in their 2021 season opener. The Muleriders dominated in their first action in over 630 days as all three phases of the game performed well for Mike McCarty, the 20th head coach in program history, who earned a 32-13 win over Northwestern Oklahoma State in his head coaching debut.

Southern Arkansas (1-0, 1-0 GAC) tallied over 450+ yards of total offense on the evening as the unit averaged over six yards per play behind a balanced attack of 255 yards passing and 198 yards on the ground. Defensively, the Muleriders tallied eight sacks to tie the single-game program record which last occurred in 2017 vs. Southwestern Oklahoma. Additionally, SAU limited the Rangers to just 68 yards on 30 rushing attempts.

It was a welcoming mix of familiar, veteran playmakers and new, young talent on both sides of the football for Southern Arkansas on Thursday night. Senior quarterback Hayden Mallory accounted for all of the team's passing yards in a 20-for-30 showing with three touchdowns; two of which went to redshirt junior Micah Small who hauled in a team-leading six catches for 82 yards and two scores. Sophomore Dekendrick Bender led SAU with 91 receiving yards on four catches with a touchdown.

On the ground it was redshirt freshman Jariq Scales who, in his collegiate debut, led all rushers with 173 yards on a hefty 32 carries with a touchdown which came early on in the second quarter that capped an eight-play, 69-yard drive by the Muleriders; the first of the McCarty Era which gave Southern Arkansas a 12-3 lead.

The Muleriders used back-to-back field goals from the leg of all-region place kicker Austin Wilkerson to lead 6-3 after the opening quarter. Wilkerson pushed through a 40-yarder less than three minutes into the season to put SAU up early and then added a 28-yard make less than ten minutes later to again give Southern Arkansas the advantage.

With the aforementioned program record in sacks, the Mulerider front seven stayed busy in the victory as six players recorded at least a half sack, while collegiate rookie Dawson Scott registered 2.0 sacks for seven loss yards and redshirt sophomore Tarrion Thompson collected 2.0 sacks as well totaling ten lost yards. Senior Demoni Boyd gathered a sack and a half, while junior Brock Floyd and redshirt freshman David Walker each added a single sack to the team's ledger with redshirt junior Prince Udenze picking up a half sack.

SAU led 12-3 at the intermission, 19-6 heading into the fourth and then placed two touchdowns on the board in the final 15 minutes. The Muleriders scored all four times they entered the red zone.

With the win, first-year head coaches are now 10-10 all-time in Mulerider debuts. SAU moves to 7-3 in season openers since joining the GAC in 2011 and it was the program's ninth road win in a season opener since becoming an NCAA program in 1996.

Southern Arkansas prepares for its home opener as Southwestern Oklahoma State heads to Magnolia for a September 11 showdown. SAU and Mulerider Athletics will honor first responders, both locally and nationally, and current and former military members throughout the evening as pregame and halftime ceremonies will reflect the 20th anniversary of the 9/11 attacks.