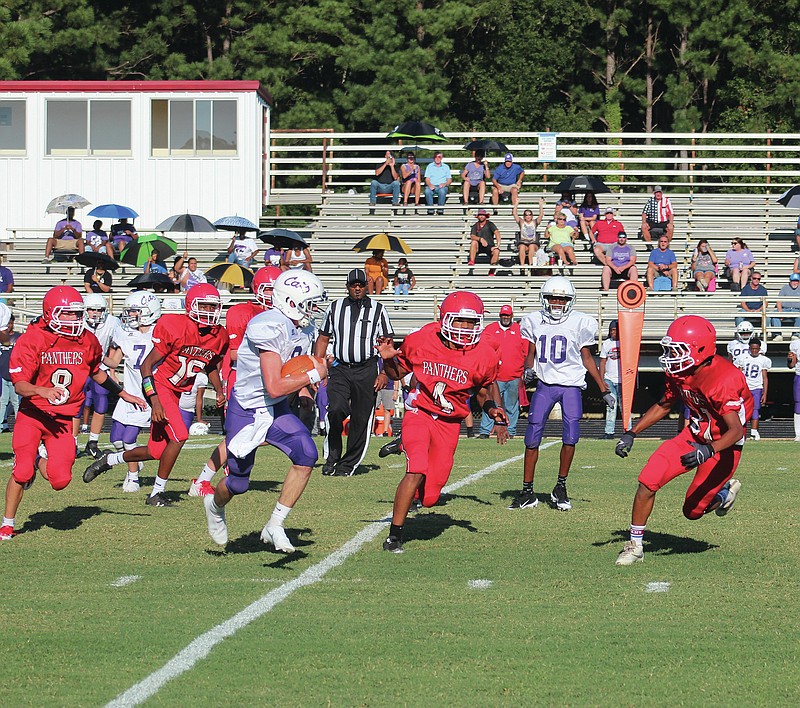 Magnolia's offense failed to score during its season opener Tuesday night as the freshmen Panthers dropped a 20-7 decision to El Dorado. The 8th grade Cubs rolled to a 38-14 win.

The freshmen Panthers' only score came on a 70-yard punt return by Antonio Brooks, which they held onto before El Dorado managed to score a pair of TDs off swing passes late in the third period.

The Panther defense kept the Wildcats in check most of the night.

Magnolia will make its first road trip of the season a week from today by traveling to Nashville. Kickoff is at 7 p.m., following an 8th grade game that will begin at 5:30 p.m.

Against the Wildcats, Brooks broke a couple of tackles and raced to the end zone midway through the first period. The two-point attempt by fullback D.J. Marshall failed, leaving the Panthers up 6-0.

Ryderius Moore came up with a fumble recovery late in the period.

At the start of the second quarter, quarterback Brady Ard's pass was picked off in the end zone.

Nicholus O'Guinn intercepted an El Dorado pass on the next possession, but the Panthers failed to score again after starting from the 11-yard line.

The Wildcats threatened late in the first half, but Magnolia's defense held at the 1 as time expired.

The Wildcats' final score came with 31 seconds remaining in the game on a 6-yard touchdown run.

Magnolia scored first when Kaleb Roach broke loose on a 45-yard touchdown run at the 3:15 mark in the first quarter. The two-point attempt failed, leaving the score 6-0.

El Dorado responded with a 44-yard touchdown run and successfully converted the two-point attempt, put the Wildkittens up 8-6 with 7.6 seconds remaining in the opening period.

Early in the second, Cubs' Chevis Johnson burst into the end zone from the 1 and quarterback Daylon Glass' two-point conversion put Magnolia up 14-8.

After the defense force El Dorado to give the ball over on downs, Johnson had a 20-yard run to the 20. Glass then threw a 20-yard touchdown pass too Malik Brewer. Bubba Williams added the two points and Magnolia's lead was extended to 22-8 at the half.

Following an interception by Ike Ainsworth to start the third period, Brewer scampered 59 yards before being tackled at the 7. Roach carried the ball into the end zone from that point and J'Don Marshall added the two points, making it 30-8.

In the final period, Dejuan Dismuke had a 20-yard run that was followed by Brewer's 31-yard touchdown score. Alarious Smith ran in the two-point conversion, making the final score 38-14.

After Thursday, Sept. 9, both local teams will be back on Don Hubbard Field at Panther Stadium on Sept. 16 to battle the Hope Bobcats.