Hogs moving on, drop out of top 25 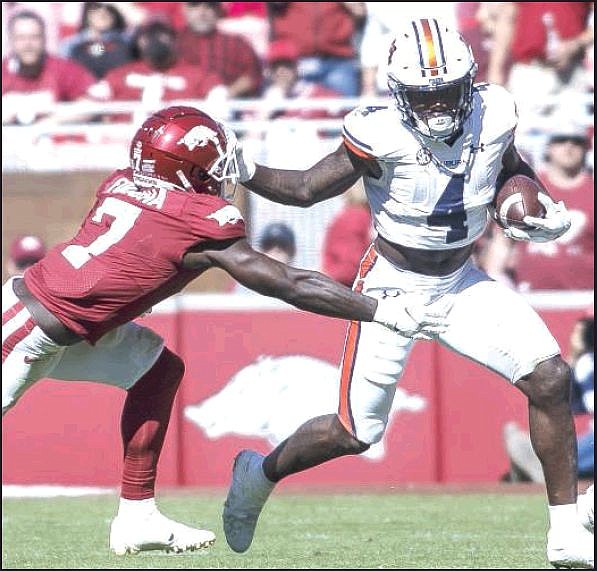 FAYETTEVILLE -- It's been a streaky football season for the University of Arkansas.

After starting 4-0, the Razorbacks have lost three consecutive games.

The Razorbacks dropped out of The Associated Press poll after being ranked as high as No. 8 following their 20-10 victory over current No. 17 Texas A&M. They were ranked No. 13 after losing at Georgia 37-0 and No. 17 after a 52-51 defeat at Ole Miss.

In the latest AP poll released Sunday, Georgia is No. 1, Ole Miss No. 12 and Auburn No. 19, so it's not as though the Razorbacks lost to lousy teams.

B ut A rka n sa s wa s a 41/2-point favorite against Auburn, the first time in 35 SEC games the Razorbacks hadn't been an underdog.

Arkansas also couldn't hold a 17-14 lead in the third quarter over the Tigers in front of a sellout crowd announced at 73,370.

"I'm looking back and I'm trying to figure out what we could have, might have done differently, during the week," Razorbacks Coach Sam Pittman said. "Because we certainly have to figure it out.

"Now, listen, we didn't get beat by a bad football team. I'm not saying that at all. They're a good football team. But we've got to figure out how we can get better, and we will." Arkansas will be a heavy favorite to beat the University of Arkansas-Pine Bluff on Saturday at War Memorial Stadium in Little Rock.

The Razorbacks then have an open date before resuming SEC play against Mississippi State in Fayetteville.

"I have great belief in our football team that we can win games and turn it around," Pittman said. "I'm looking forward to looking at the tape and Monday getting the kids in, seeing who's healthy and who's not and going on to the next week and trying to get to 5-3.

"I'm disappointed that we lost, but I feel like we've got a lot to play for. We've got a bowl opportunity.

"We have to play well to get that opportunity, so I think our kids are fine as far as their mind. We just have to fix some things and that starts with me." Arkansas' 4-0 start included a 40-21 victory over Texas that got the Razorbacks back in the national spotlight.

"I think that we've done a lot of great things and grown as a team," senior linebacker Bumper Pool said. "We didn't play our best performance in the slightest, but I felt like we were still in that game.

"It's frustrating to lose a game like that when you know how much you worked, how much this team poured in and how much buy-in there is on this team.

"In the locker room after the game no one's head was down. We've got guys keeping each other up. Obviously, we're upset, but the closeness of this team is like I've never seen before." Senior offensive tackle Myron Cunningham, an offensive captain, said he's confident the Razorbacks can rally.

"We can definitely finish the season strong," Cunningham said. "The way we started the season, we just have got to get back to that mentality, that work ethic." The Razorbacks played without four injured starters against Auburn -- safety Jalen Catalon, defensive lineman Markell Utsey, cornerback LaDarrius Bishop and offensive tackle Dalton Wagner.

"They're trying, but if you see the plays we were making earlier in the year, we're not making them now," Pittman said. "Sometimes we are, but most of the time we're not.

"I just think we've got a beat up football team. We need to get ready for Pine Bluff next weekend, then take that week off. We need it."

Print Headline: Hogs moving on, drop out of top 25