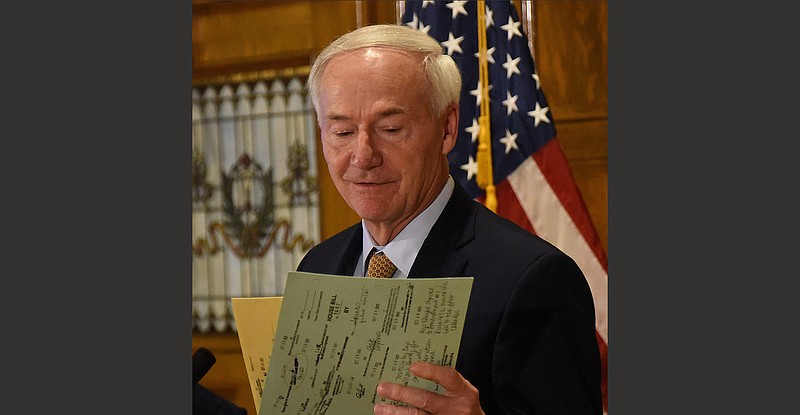 Gov. Asa Hutchinson, holding the redistricting bills Wednesday, said he was concerned about the impact of the new map on minority-group populations in the state but decided against a veto “out of deference to the legislative prerogative and the political process.” (Arkansas Democrat-Gazette/Staci Vandagriff)

Arkansas Gov. Asa Hutchinson will allow a congressional redistricting plan that trisects the state's most populous county and legislation targeting employer-mandated coronavirus vaccinations to become law without his signature, he announced Wednesday.

State lawmakers sent the bills to his desk near the close of the 93rd regular legislative session, which is set to officially adjourn Friday.

The redistricting legislation has drawn criticism for dividing Pulaski County among the 2nd, 3rd and 4th congressional districts, shifting 21,000 Black residents out of the 2nd Congressional District covering Central Arkansas. The maps also split the cities of Little Rock and North Little Rock between different districts.

Proponents of the maps passed by the GOP-controlled Legislature say they create compact districts and keep each district close to the ideal number of constituents for one of Arkansas' four U.S. representatives. Arkansas' population grew to 3,011,524 over the past decade, making that number 752,881.

The companion bills are Senate Bill 743 by Sen. Jane English, R-North Little Rock, and House Bill 1982 by Rep. Nelda Speaks, R-Mountain Home. Speaks was traveling and unable to comment Wednesday afternoon, and English did not return calls from the newspaper by Wednesday evening.

Hutchinson, a Republican, said he was concerned about the impact of the new map on minority-group populations.

He said a number of people had asked him to veto the legislation, but he had decided against that "out of deference to the legislative prerogative and the political process." He had noted that the U.S. Constitution gives redistricting authority to state legislatures.

Arkansas lawmakers can override a veto with a simple majority in both chambers.

Hutchinson said the 90 days until the redistricting laws take effect will allow any party wishing to challenge them in court to do so. He recalled a 1990 case over the congressional redistricting plan passed by the Arkansas General Assembly at that time in which he was counsel with the NAACP. While the court determined that map did not violate the Voting Rights Act nor constitute intentional discrimination, Hutchinson said he "learned from that experience the real concerns of the minority population about their equal opportunity to have an effective voice in congressional elections."

"Fair and equal representation is necessary for the integrity and essence of our democratic process," he said.

"After hours of hearings, multiple meetings and countless talks, we have a fair and legal map for all of Arkansas. He would know this if he spent any time engaging in the debate. Instead, he was MIA," Garner said on Twitter.

"The new congressional districts are compact and keep community interests together. These lines are largely consistent with existing lines, which were drawn by Democrats in 2010," Republican Party of Arkansas chairwoman Jonelle Fulmer said in a statement.

Opponents of the redistricting bills say they intentionally weaken the voting power of racial minorities and will result in a lawsuit.

Democratic Party of Arkansas chairman Grant Tennille said Hutchinson's comments "reveal both a lack of faith in the legislation passed and in the Legislature itself."

"He doesn't trust his own Republican Party controlled Legislature to receive a veto and then come back with fair maps and laws," Tennille said in a statement.

Tennille said the governor knows the courts "will have to get involved to straighten out this illegal mess" and that the party is "prepared to fulfill our part in whatever manner is appropriate with all parties involved in the coming legal process to protect Arkansas voters."

The American Civil Liberties Union of Arkansas did not announce any litigation plans Wednesday evening but called the redistricting plan "blatant racial gerrymandering" in a statement.

"This is a clear example of politicians abusing the districting process to manipulate the outcome of elections. Representative maps are fundamental to ensure that every vote counts, and serve as the foundation of systemic equality for Black and Brown residents," said Holly Dickson, executive director of the ACLU of Arkansas.

Dianne Curry, president of the Little Rock NAACP, said the group was working with other community organizations "to make sure people are aware of what happened." She described the bills as an "intended and deliberate" effort to "dilute voting power of a particular area."

The bills' legislative sponsors said previously that they did not take race into account when drawing the maps.

Pulaski County's population grew to 399,125 over the past decade. The county is more racially diverse and more Democratic than the rest of the state. A little more than 70% of Arkansans identified solely as white in the latest U.S. census, while 49.9% of people in Pulaski County identified as white alone and 36% identified as Black alone.

If litigation is filed, Arkansas will not be the first state to face a lawsuit over redistricting. The ACLU announced in a tweet Tuesday that it was suing South Carolina over that state's redistricting process, "which largely avoided public input and has left electoral districts wildly out of proportion just months before election season," the organization said.

In Arkansas, some redistricting proposals were presented to committees at the state Capitol just before the legislative session resumed this fall; other bills were introduced after the session was underway. The bills containing the proposals and legislative debate could be viewed on the Legislature's website. In SB743 and HB1982, the splits are described by telling what voting precincts fall in which district.

A lawsuit is not the only course of action available to opponents of the redistricting law. Community organization Arkansans for a Unified Natural State announced Monday that the group would spearhead a veto referendum effort to stop the laws from going into effect.

The group must gather signatures from 6% of registered voters no more than 90 days after the end of the session when the law was passed to get the measure on the November 2022 ballot.

Founder Kwami Abdul-Bey said in a news release that the group "will have enough power to leverage against the executive and legislative branches to demand that only fair, equitable and competitive maps are drawn in a totally open and transparent process."

The other two bills that became law without the governor's signature were House Bill 1977 by Rep. Joshua Bryant, R-Rogers, and Senate Bill 739 by Sen. Kim Hammer, R-Benton. They require employers that mandate vaccinations to provide an exemption process for workers, including requiring them to produce a negative antigen test once a week or proof of immunity including the presence of antibodies twice a year.

Hutchinson said the bills are designed to push back on President Joe Biden's vaccine mandate for federal contractors and employers with more than 100 employees. That will be implemented pursuant to rules from the Occupational Safety and Health Administration, which have not yet been issued.

He said he opposes the federal mandate, but the legislation is counterproductive and that the government should not interfere with the ability of businesses to protect their workers and customers.

"These bills are unnecessary and the debate on these bills have been harmful to our goal of increasing vaccination rates in Arkansas," Hutchinson said.

The governor said the federal mandate already allows a testing regimen for employees who do not want to take the vaccine or have religious or medical exemptions.

Hutchinson reiterated that the vaccines are safe and have been evaluated. He added that the U.S. Food and Drug Administration has a vigorous approval process, which the vaccines passed.

"Arkansans need to get vaccinated, but not through mandates from the state level or from the federal level," he said.

He added that the FDA has not defined natural immunity.

"That is not something that I expect to see in the federal rules that come down. That will be in direct conflict with the state," Hutchinson said.

Hammer said he believes his bill is needed in the absence of the rules for the federal vaccination mandate. It creates Arkansas requirements that provide safe alternatives to being vaccinated based on information from U.S. Centers for Disease Control and Prevention publications, he said.

He said his legislation "should create no conflict."

"It is easy to talk about what ought to be, but this legislation puts into action what needs to be done," he said.

Hammer said he believes the courts will uphold his bill because it is based on what the CDC has said are acceptable alternatives to being vaccinated.

Bryant said he wishes Hutchinson would have listened to more of the testimony on this bill and understood that personal freedom is the foundation of liberty instead of reading "chamber of commerce talking points."

He said large corporations were dismissing employees after granting exemptions from the vaccine requirements.

The Legislature on Friday approved identical resolutions -- Senate Resolution 35 and House Resolution 1054, respectively -- under which each chamber would recess the regular session that day.

The resolution would authorize Senate President Pro Tempore Jimmy Hickey, R-Texarkana, and House Speaker Matthew Shepherd, R-El Dorado, to reconvene the General Assembly at any time before noon Friday this week to consider vetoes, correct errors and oversights or adjourn the regular session.

Hickey said Wednesday in a text message, "We would only come back to consider vetoes" or "to correct technical errors." The Bureau of Legislative Research "told me earlier today we were good on that," he said.

Friday was the 117th day of the regular session. Hutchinson has said he tentatively plans to call lawmakers back into special session on Oct. 25 to consider income tax cuts.

Asked Wednesday whether the proclamation calling lawmakers into the special session would include topics in addition to the tax cuts such as an anti-abortion bill modeled after one recently passed in Texas, Hutchinson said it would be "premature" to do so.

"I'm pro-life, I think I want to follow what's happening in the Texas bill, but we need some guidance from the Supreme Court. I mean, in the next month or so you're going to have additional guidance from the court system as to what's going to be permissible," he said.

State Sen. Jason Rapert, R-Conway, tweeted Monday that he would file a bill modeled after Texas' law and invited Hutchinson to put it on the call.

The Texas legislation is the most restrictive abortion law in the United States. It bans abortions once cardiac activity is detected, usually around six weeks, and is now being disputed in the courts.

The law leaves enforcement solely up to private citizens, who are entitled to collect $10,000 in damages if they bring successful lawsuits against not just abortion providers who violate the restrictions, but also anyone who helps a woman obtain an abortion. 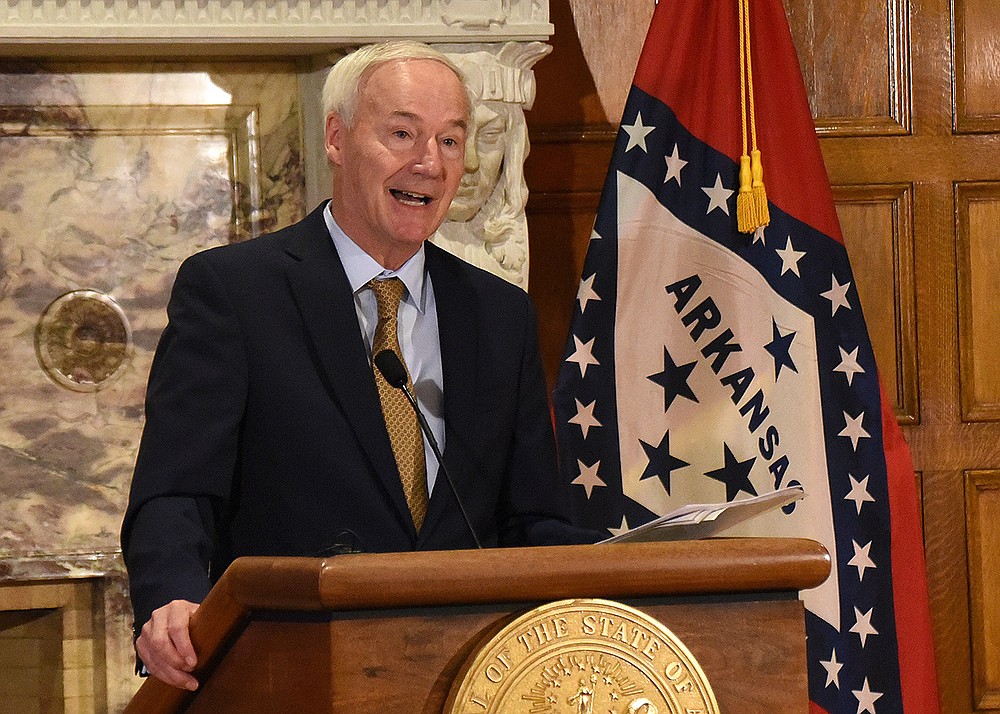 Gov. Asa Hutchinson said Wednesday that he tentatively plans to call a special session on Oct. 20 to consider income tax cuts, but said it would be “premature” to comment on the possible introduction of anti-abortion legislation modeled after what Texas recently enacted. (Arkansas Democrat-Gazette/Staci Vandagriff)