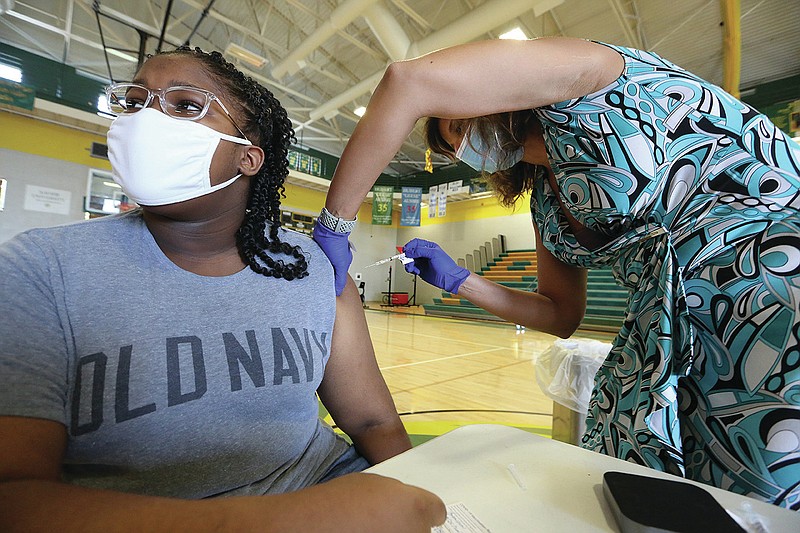 "I don't believe it is sound," Hutchinson said of the ruling by Benton County Circuit Judge Xollie Duncan.

He noted his support for an Aug. 6 order by Pulaski County Circuit Judge Tim Fox that halted the enforcement of a state law barring school districts and other government entities from requiring people to wear masks.

"I think, as I've articulated in the case here in Pulaski County, it's important for local school districts to have that flexibility in terms of public health and protecting their students, and that's a position I support, particularly whenever [children under 12] cannot be vaccinated," Hutchinson said.

"They have to have the capability of taking whatever measures they need to to protect their students and their faculty and to continue school."

The governor made the comments as the state's count of coronavirus cases rose by 694, an increase that was smaller by 188 than the one the previous Wednesday.

Already at its lowest level since July 10, the number of people hospitalized in the state with covid-19 fell by six, to 531.

The state's death toll from the virus, as tracked by the Department of Health, rose by 19, to 8,166.

Ruling in a lawsuit filed by three parents, she said she could find no state law that gave the Bentonville district the authority to issue a mask mandate.

She granted the parents' request for a temporary order stopping the district from enforcing the policy.

The School Board said Tuesday that it would appeal the ruling.

Hutchinson signed Act 1002, which prohibited state and local government entities from requiring people to wear masks, but later said he regretted it.

In the lawsuit that led to Fox's ruling, he has sided with the Little Rock and Marion school districts and other plaintiffs in arguing that the law is unconstitutional.

The Arkansas Supreme Court last month declined a request by legislative leaders to stay Fox's order pending a final decision on their appeal.

The plaintiffs in the Benton County case are represented by attorneys Travis Story and Gregory Payne of Fayetteville, who filed a similar lawsuit challenging the Cabot School District's mask requirement.

In that case, Lonoke County Circuit Judge Barbara Elmore on Aug. 27 declined the plaintiffs' request for a temporary order lifting the mandate.

The Cabot district, however, lifted its mask requirement last month for its junior high and high schools and on Wednesday for other grade levels.

"Although we are making the transition from required to highly recommended, the Superintendent, in consultation with the School Board, may reinstate a face covering requirement at specific schools based on an increase in positivity and/or quarantine rates," the district said on its website.

Hutchinson said last week that the Bentonville and Cabot districts, along with those in Russellville and Springdale, were participating in a pilot program allowing them to use regular rapid testing for the coronavirus as an alternative to quarantines for students and employees who are exposed to someone with covid-19.

At his weekly news conference at the state Capitol on Wednesday, the governor noted that students who are vaccinated also aren't required to quarantine after such an exposure unless they develop symptoms.

But he said vaccinations for children age 12 and older had "flattened out" after a steep increase ahead of the start of the 2021-22 school year.

"That obviously is not what we want to see," Hutchinson said.

"We want to continue to emphasize the opportunity to be vaccinated for our adolescents, and whenever you look at quarantines at school, the easiest answer for avoiding quarantine at school is to get vaccinated."

The vaccine developed by Pfizer and BioNTech is allowed for children 12 and older, and the companies last week asked the U.S. Food and Drug Administration to extend the authorization for children ages 5-11.

An advisory committee to the FDA is scheduled to consider the request Oct. 26.

The other two vaccines authorized by the FDA, from Moderna and Johnson & Johnson, are allowed only for people 18 and older.

According to a federal report, 47.8% of Arkansans ages 12-17 had received at least one vaccine dose as of Tuesday, and 37.9% were fully vaccinated.

Health Secretary Jose Romero on Wednesday also emphasized the importance of vaccinations for children, noting that almost twice the number of children and 18-year-olds were hospitalized with covid-19 in August than in January during the state's winter surge.

"The biggest jump of cases occurred in that 5- to 11-year-old group," Romero said, comparing the winter and summer surges.

If authorized by the FDA, he said, the Pfizer vaccine for children in that age group will be available around the state next month at pharmacies, doctor's offices and the Health Department's local health units.

Hutchinson also referred to the Health Department's tally of Arkansans of all ages who had been fully vaccinated, which rose Wednesday by just over 2,000.

"That's a very slow, incremental increase in vaccinations that I would like to see accelerated," he said.

The increase in the case count Wednesday was the second one in a row that was smaller than the one a week earlier.

The average daily increase over a rolling seven-day period fell to 661.

That was still up, however, from a recent low of 655 a day the week ending Friday.

After falling a day earlier, the number of the state's virus patients who were on ventilators rose by three, to 163.

The number who were in intensive care remained at 253 after falling the previous five days.

Already at its lowest level since July 9, the number of cases in the state that were considered active fell by 104, to 6,702, as recoveries and deaths outpaced new cases.

At 6,951, the increase Wednesday in doses that providers reported having administered, including second and third doses of the Pfizer and Moderna vaccines, was smaller by more than 3,300 than the one a week earlier.

The average number of doses administered each day over a rolling seven-day period fell to 6,389, its lowest level since the week ending Sept. 29.

Of the most recently reported doses, 47% were third doses, including booster shots of the Pfizer vaccine for people who received their second dose at least six months ago.

Second doses made up about 28% of the increase, while first doses accounted for 25%.

According to the CDC, the number of Arkansans of all ages who had received at least one vaccine dose grew Wednesday by 1,606, to 1,703,875, representing about 56.5% of the population.

Among the states and District of Columbia, Arkansas continued to rank 37th in the percentage of its population who had received at least one vaccine dose.

In the percentage who were fully vaccinated, it fell from No. 42 to No. 44, ahead of only Louisiana, North Dakota, Mississippi, Alabama, Wyoming, Idaho and West Virginia, as Georgia and Tennessee moved up in the rankings.

Nationally, 65.6% of people had received at least one dose, and 56.6% were fully vaccinated.