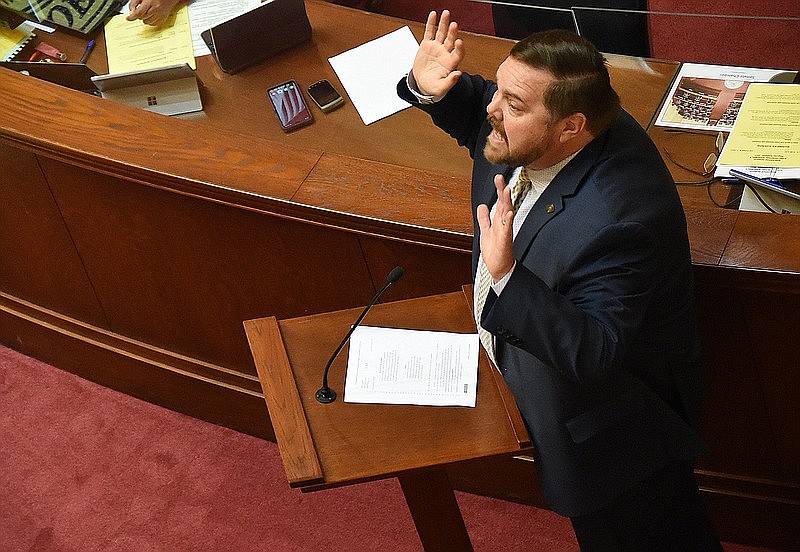 The majority-Republican Senate voted 22-11 in favor of the measure declaring a "right of privacy" for employees and contractors regarding their vaccination status. A House panel later endorsed the bill, sending to the full House for a final vote.

The proposal is among several measures limiting or prohibiting vaccine requirements by businesses that have dominated a session that was intended to focus on congressional redistricting. A day earlier, lawmakers sent the governor a proposal allowing workers to opt out of their employer's COVID-19 vaccine requirements.

The measures are primarily in response to President Joe Biden's order requiring businesses with more than 100 employees to require employees to get vaccinated or tested weekly.

"We've got to push back, and this is where it starts," Republican Rep. Mary Bentley, a member of the House Public Health Committee, said before the panel endorsed the measure.

But even before that order, some of the state's largest employers such as Walmart and several hospitals had already announced vaccine requirements for some or all employees.

Business groups and economic development officials said the new restriction if enacted could have devastating effects for companies, forcing them to choose between federal fines for not complying with the vaccine mandate or the prospect of being sued if they don't comply with the state law.

"We are shredding employment at will in Arkansas if you pass this bill and it becomes law," Randy Zook, president of the state Chamber of Commerce, told the House committee.

The proposal, however, wouldn't take effect until early next year if it's enacted. The bill failed to win the two-thirds support in the Senate needed for it to take effect immediately. Without that support, it would take effect 90 days after the Legislature adjourns.

"I think a lot of people are getting a lot of false hope right now because they think this is going to protect them in the next month or six weeks," Republican Rep. Jon Eubanks said.

Republican Gov. Asa Hutchinson has not said what he would do if the bill reaches his desk, though he's expressed concern about other attempts by the Legislature to prevent businesses from requiring employees be vaccinated.

The measure is also likely to face legal challenges from companies.

"There are a lot of lawyers in tall buildings in Little Rock who are getting ready to make their Christmas list right now because they're the ones who are going to go figure this stuff out," Jim Hudson, general counsel for the state Commerce Department, told the panel.

"If I'm another state, I'm probably watching this and going to use this against us in some of these competitive projects," Preston said.

The restriction could also jeopardize Medicare and Medicaid funding for health care facilities that are required to collect information about number of employees who are vaccinated. A hotel owner said the restriction would prevent him from ensuring unvaccinated staff who are exposed to the virus properly quarantine.

Supporters of the measure said they believed they could use the next three months to adjust the restriction if it's enacted to address some of the concerns raised by opponents.

"We need to get this passed now to get the clock ticking," Republican Rep. John Payton said.

The House panel advanced the measure hours after the Senate rejected an attempt to make the vaccine opt-out proposal take effect immediately.