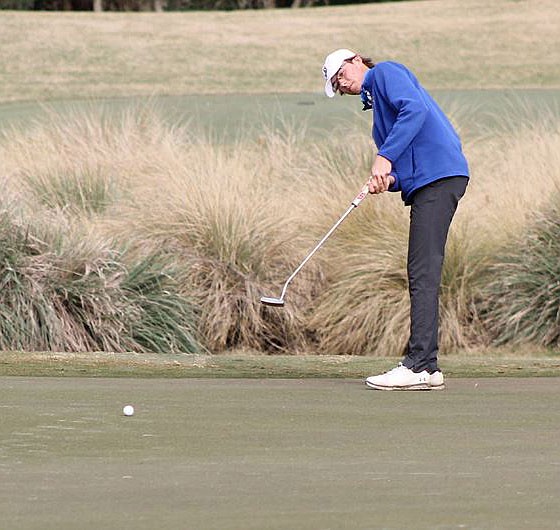 HOT SPRINGS – The Southern Arkansas University men's golf team continued their hot play on Tuesday afternoon, as they closed out the HSU Battle for The Belt by shooting a 294 to finish third overall. SAU tallied an 861 (283, 284, 294) for their three round total, which is the sixth lowest 54 hole team total in program history. This marks the third top five finish for the Muleriders this fall.

Southern Arkansas only trailed the first place finisher in host school Henderson State University by 16 strokes, and finished 10 strokes behind Arkansas Tech, who is fresh off of a National Championship.

Caleb Miller (73, 70, 68) notched a top five finish for the Muleriders, as he finished the three round tournament in 4th place overall. Miller's 68 in round three is a new career best for him, and his 211 stroke total is tied for the 8th lowest 54 hole total in program history.

Southern Arkansas finished the tournament tied for first with two eagles, while they also collected 54 birdies which was good for third overall. Miller finished -5 on par-4 scoring, and Timmerman collected 38 birdies which was tied for fourth. SAU had three players collect an eagle in Davis, Harrington, and Miller. Tyler Garrett led SAU with 14 birdies.

The Muleriders will have one more tournament this fall, as they are set to compete in the Tulsa Cup, hosted by Rogers State University on October 25 and 26.