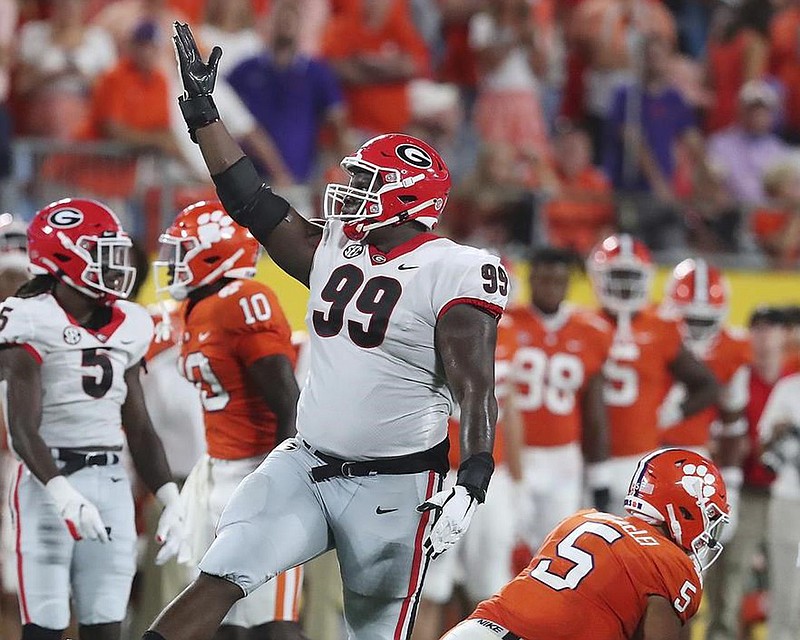 FAYETTEVILLE -- University of Arkansas Coach Sam Pittman had this bottom-line take on the Georgia defense after rattling off a list of the Bulldogs assets: They're kicking butt.

Pittman knows most of the key contributors on the Georgia defense, having served on the Bulldogs' staff as offensive line coach from 2016-19.

"I told him he doesn't need to put any more blitzes in because he can't run them all anyway," Pittman said.

Lanning, a Georgia assistant along with Pittman in 2018-19, kept up the gag.

The fun and games between friends will turn into a chess match among combatants between the hedges at Sanford Stadium on Saturday.

Pittman, whose line worked against Lanning's schemes and pressures for two full seasons, was asked if that will give him an edge.

"He knows I know and he's going to give me a different look than what he's given somebody else," Pittman said. "Instead of coming from one side, it's going to be the other side. So yeah, he knows.

"He knows [Arkansas offensive line] Coach [Cody] Kennedy was there, I was there. He knows we know what Georgia does. He might just say, 'This is what we do. Try to block us.' That's the beauty of college coaching or any coaching, is trying to outwit the other guy and just make sure you don't screw your own team up by giving each other too much credit."

Smart hasn't been blown away by the caliber of offenses his team has faced in beating Clemson, Alabama-Birmingham, South Carolina and Vanderbilt and outscoring them 174-23.

Opponents are averaging 2.3 yards per run play and 4.6 yards per pass against the Bulldogs, whose team speed matches up with the best in the country.

"Georgia's defense, it kind of reminds me of our defense," Arkansas tailback Trelon Smith said. "They run to the ball, they hit, they've got a lot of size up front. ... We've got to execute on all cylinders. The O-line has got to be physical, real physical this week. ... We've got to create a run game."

Quarterback pressures are not an official NCAA stat, but the Bulldogs do have 66 pressures, an average of 16.5 per game. By comparison, Arkansas has been credited with 18 quarterback hurries and its opponents have just nine.

Hybrid linebacker Adam Anderson and nose tackle Jalen Carter have been credited with 9 quarterback pressures each to lead the team, while linebackers Robert Beal Jr. and Nakobe Dean have 7 and 6, respectively.

"It seems like this year they're playing with so much confidence," Pittman said. "They're running to the ball. That's a staple of Dan Lanning and Kirby Smart and how Georgia plays.

"They have just outstanding talent, a very physical and very big defense. And everybody, all 11 of them can really, really run. I think the most important factor is they're playing so well together. ... I mean the stats don't lie. They're kicking a lot of butt right now."

Anderson has been used to spy on quarterbacks in the past and has the goods to mirror swift signal callers. He ran a 4.47 in the 40-yard dash at Georgia's summer combine and has played the prestigious "Star" spot on the Bulldogs' defense.

Defensive tackles Jordan Davis and Devonte Wyatt are 6-6, 340 pounds and 6-3, 315 pounds, respectively, and hard to root out in the run game, but their agility and speed make them premier pass rushers and ball chasers.

Smith picked up on all that team speed when watching the Bulldogs on video.

"You've got D-ends who can get to the sidelines fast," he said. "You've got linebackers who are good running side-to-side. When I play ball, especially in the SEC, I think about getting vertical as fast as possible ... even on the outside zone play."

Pittman said it would be big if the Hogs can establish Smith and the run game.

"The bottom line is Smitty is our fire plug," Pittman said. "He's our starter. ... We know that he's going to run like heck when that game starts. Therefore, that's one of the reasons why [Smith starts], because we know he can bring that early juice to our football team."

In last year's 37-10 loss to the No. 3 Bulldogs, Arkansas managed 15 first downs, 203 passing yards and 280 total yards. Smith ran for 38 yards on 6 carries, averaging 6.3 yards per carry, and Feleipe Franks hit Treylon Burks with a 49-yard catch-and-run touchdown pass to open the scoring midway through the first quarter.

The Bulldogs will look to contain Arkansas quarterback KJ Jefferson, the only quarterback in the SEC with 800-plus yards passing and 200-plus yards rushing, and keep Burks, Tyson Morris, De'Vion Warren, Warren Thompson and others from beating them over the top.

Pittman was asked how the Georgia defense compares to Texas A&M, which had gaudy statistics heading into last week's loss to Arkansas.

"Georgia has a tremendous amount of depth, so they can just roll players and roll players," Pittman said. "A&M had good depth as well, but I think Georgia just has more depth there. And they're a little scarier because I'm familiar with what they're going to do to us and what we have to do to stop them."

Print Headline: No. 8 Hogs must deal with No. 2 'Dogs defense