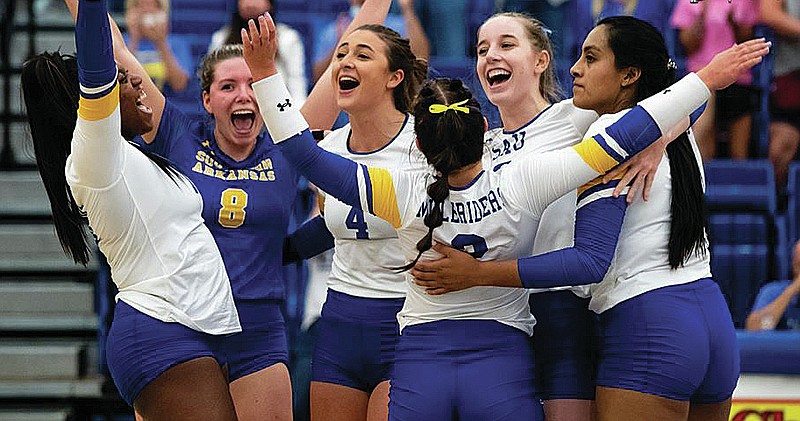 After dropping the first two sets of the match, the Southern Arkansas University volleyball team reeled off three straight set wins to pick up a 3-2 victory (19-25, 21-25, 25-19, 25-23, 15-8) over Ouachita Baptist University on Thursday. It was the Lady Muleriders' first Great American Conference win of the season, as they move to 5-10 on the year and 1-4 in GAC play.

Set's one and two saw Ouachita jump out to early leads and never look back, as they cruised to an early 2-0 lead over SAU.

Set three saw SAU fall down early 2-1, but this would be the last time OBU would lead in the set. The Lady Muleriders would use a 6-2 run, to make it 7-3 early on. OBU came back to cut it to one point at 8-9, but SAU had an answer as they used a 10-2 run to separate themselves and close out the set for their first win of the night.

Trailing two set wins to one, set four saw both squads have a tightly contested set. OBU would jump out to a 1-0 lead, but SAU would keep them close, trading points back and forth to tie it at 4-4. Down 19-13, OBU was able to battle back and tie it at 23-23, before SAU was able to score the final two points on Victoria White and Landry Rogers kills to win 25-23.

The Lady Muleriders started set five in dominant fashion as they quickly jumped out to a 10-2 lead. OBU was able to add six more points to their total, but this would not be enough as SAU was able to reach 15 points to pick up the win. SAU used a .563 attack percentage to help pick up the win in the fifth set.

Southern Arkansas finished with a .238 attacking percentage, to go along with a team high 56 kills, 46 assists, 50 digs, and nine blocks.

White had a game high 18 kills for the Muleriders to go along with a .250 attack percentage. Rogers hit .387, while collecting 14 kills. Abby Bermudez finished with 11 kills, and a game high five blocks, while hitting .348 in the contest. Isla Olivas hit .333 and collected 11 kills.

Southern Arkansas will return to the court on Thursday, October 7, when they host Southeastern Oklahoma State University inside the W.T. Watson Athletic Center. First serve is set for 6 p.m.