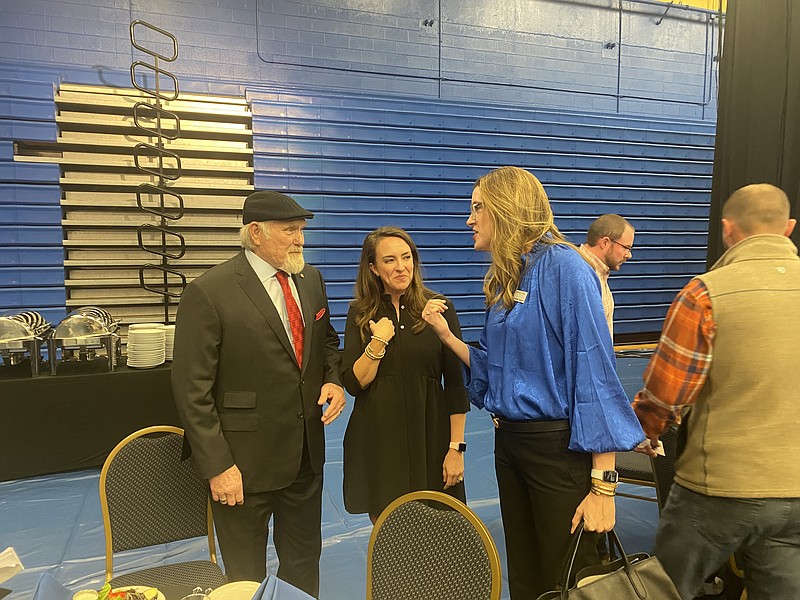 An inspirational, belly busting, and football laden speech was delivered like a touchdown pass Tuesday night by beloved quarterback Terry Bradshaw whose fame extends past the NFL.

Before the event, Bradshaw walked casually through the crowd, shaking hands with those who were near as he made his way for his seat at the head table, accompanied by his wife, Tammy Bradshaw, who he met long after his famous football career ended. He said in his speech that he still remembers what she wore on their first date 22 years ago.

Once he took the stage, Bradshaw had the crowd of 550 at the W.T. Watson Gymnasium roaring with laughter. His first joke was aimed at SAU’s Berry, and visiting Magnolia, a town that reminds him of the city where he went to college — Ruston’s Louisiana Tech.

“I’ll be looking forward to my doctorate, Dr. Berry,” he said, adding that he would take it to brag to his alma mater. “There are good country people here. Pretty much everybody knows everybody. And we stopped to feed a few deer to get them off the runway.”

Bradshaw, the only NFL player with a star on the Hollywood Walk of Fame, focused part of his speech on telling young people they needed to find something to focus on and work hard to achieve that goal.

“If you believe in it, it can happen,” he said.

The four-time Super Bowl champion quarterback with the Pittsburgh Steelers said he was only seven years old when he identified what it was that he wanted to do, and that was nothing other than play in the NFL. And Bradshaw said he felt his goal was divine.

“The Bible says be still. He’s speaking to you,” he said.

Bradshaw said he played football constantly, even throwing the ball up to himself and catching it each night in his bed.

“When I got a hold of the football and put it in my hands and smelled the leather and watched the games, I thought, ‘this is it,’” he said.

The Super Bowl MVP, Pro Football Hall of Fame inductee and multi-Emmy award-winning broadcaster on Fox NFL Sunday said he did not start out as a great football player. He even recalled an embarrassing moment in junior high as he dressed out for a game.

“I didn’t know how to put a jock strap on, and I wasn’t sure I needed one,” he said as the crowd laughed. “But this was my calling, and I had identified my calling.”

Bradshaw, known for spiraling the football into the end zone, said once he found his calling, he never gave it up, and he even remembered the clickety clack of the first cleats he ever put on.

“I just had such a passion,” he said. “When you go to bed, you need a reason to get out of bed in the morning. Young people, if you do not have that, you are wasting your life.”

One of the hardest parts of his football career were certain games with the Steelers where he knew he would never be with the same team members again.

“The saddest moment in my whole life was when I realized this will never happen again,” he said.

One of the most prolific quarterbacks in history, Bradshaw walked during his speech and did not take advantage of a chair on stage. He said he has two bum knees, so while he misses playing the game, the 73-year-old now must sustain his love of it by being a broadcaster and sports analyst.

He said he can’t hear, but he still does some singing shows in Las Vegas and in Branson.

Bradshaw also poked fun at his college, saying it did not have near the money that SAU had for scholarships.

“You have done a phenomenal job of investing in young people,” he said. “We were a poor school. We had to use a mule for driver’s ed and sex education.”

Bradshaw also poked fun at his own situation after one of his divorces, when his mother and father wanted to visit and he had to tell them no because he had been living in a barn for 15 months.

“They said we love you and are praying for you. You know they are good old Baptist folks, but when they asked to come over, I would have to say you can come and stay in a hotel. I live in a 12 by 12 room,” he said.

Tuesday’s event was the 16th annual iteration of the speaker series, according to Candace Rankin, executive administrative and marketing assistant for Farmers Bank & Trust. Rankin, who was recognized at Tuesday night’s event, said it is her job to find speakers for the event each year.

There was no speaking event in 2020 due to COVID.

“I’ve been trying to get Terry Bradshaw for years,” she said. “When it was finally approved, I was really happy about it. After 2020, people need someone who is lighthearted. Someone they look up to and someone they could be around.”

The first speaker, back in 2005, was Steve Ford, son of President Gerald Ford, Rankin said. A few of the other speakers have been James Carville, American political consultant and author; Michael Reagan, son of Ronald Reagan; and Ehud Olmert, former Prime Minister of Israel, she said.

“Bob Burns (CEO of Farmers Bank & Trust for almost 40 years) wanted something to bring to Magnolia where people could hear speakers and bring something to the town that they otherwise wouldn’t get to experience,” Rankin said. “And to give everyone an evening to remember and great memories they wouldn’t otherwise have.”

The two students who were this year’s recipients of the speaking series scholarships were Kimber Birdsong, a senior from Prescott, Ark. whose major is game animation and simulation design; and Seth Horn, a junior, from Farmington, Ark., majoring in agricultural education.

Rankin said the news the event sold out so fast made everyone feel elated, but there was also a desire to be able to include more people.

“The day we sold out was the day that the SAU team started working on where we could move to accommodate more people,” she said. “They moved mountains to get into the gym and it took a lot of work. There was already a game scheduled there. The staff at SAU is just incredible and every year I’m just in awe of all the stuff they can do.”

In addition to raising money by selling tickets to the dinner and the speaking event and a reception beforehand, others who attended tried their luck at a silent auction. Dr. Krista Nelson, associate professor of psychology in behavioral and social sciences at SAU, was the lucky winner of an SAU football helmet signed by Bradshaw. 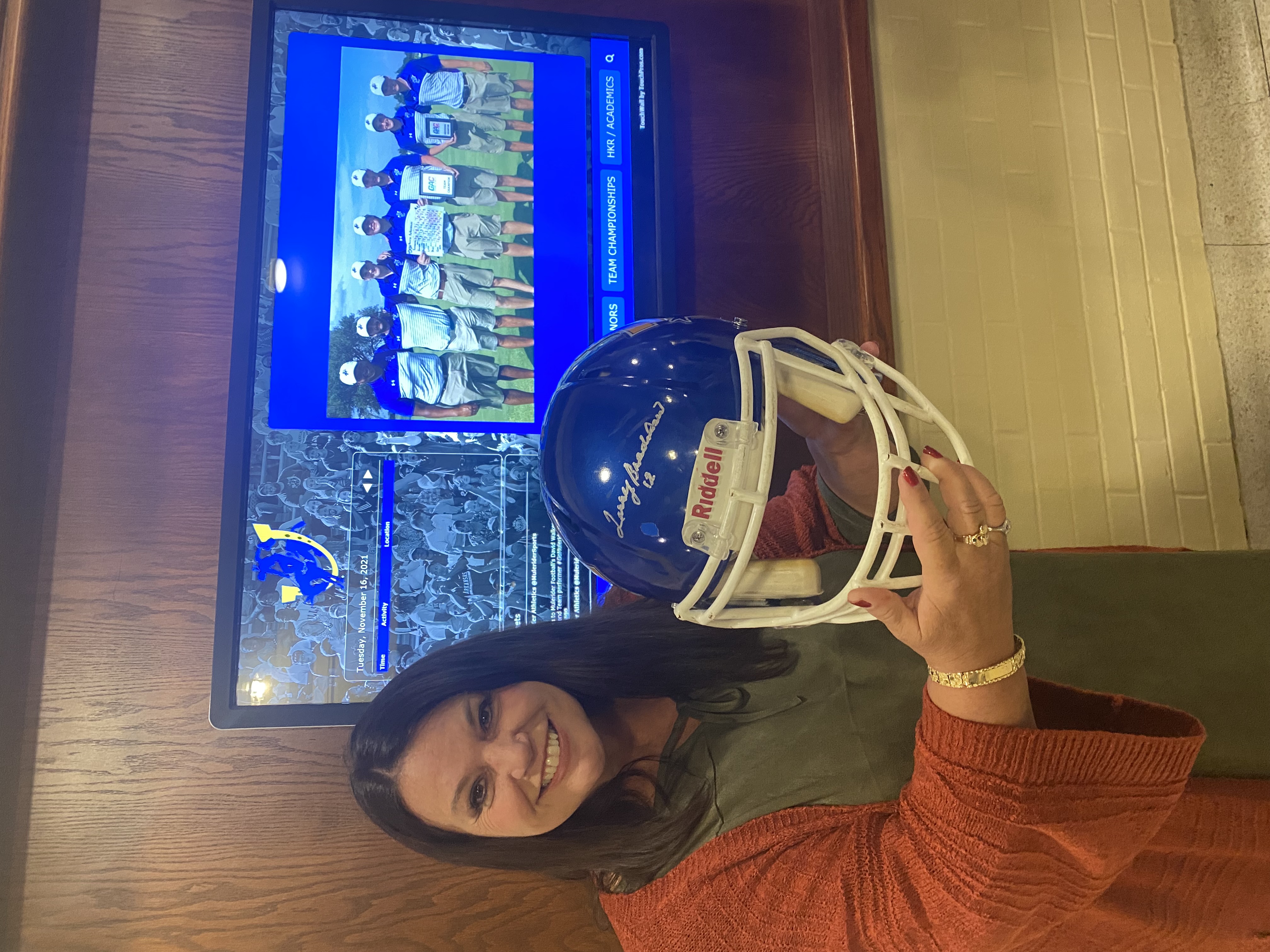 Dr. Krista Nelson, associate professor of psychology at Southern Arkansas University, who received her doctorate from Louisiana Tech, won a SAU helmet signed by Terry Bradshaw during the Farmers Bank & Trust Distinguished Speaker Series Tuesday night. Nelson won the helmet in a silent auction and said she wanted it because Bradshaw also went to Louisiana Tech. (Becky Bell/Special to the Banner News)

Her husband, attorney Darren Nelson, said his wife liked the idea of having the helmet because both she and Bradshaw attended Louisiana Tech. Krista Nelson received her doctorate from there, he said.

“We are both Louisiana Tech grads and I thought tonight was uplifting, enthusiastic, and overall, a fun evening,” she said.