State offering incentives for getting vaccinated 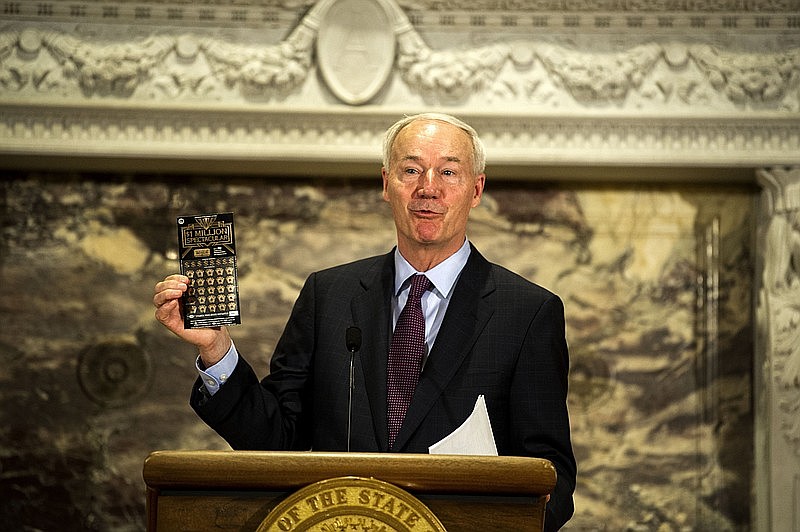 Governor Hutchinson holds up a scratch lottery ticket as he announces a new initiative that will give a lottery ticket or a Arkansas Game and Fish voucher for a fishing and/or hunting license to any Arkansan who gets vaccinated during a weekly address on Arkansas’ response to COVID-19 on Tuesday, May 25. (Arkansas Democrat-Gazette/Stephen Swofford)

Governor Asa Hutchinson announced Tuesday that the state would be offering several incentives to residents to get vaccinated against the COVID-19 virus.

Vaccination efforts have been ongoing in Arkansas since December, but as demand has dropped in recent weeks, several organizations, including the Arkansas Department of Health, have begun offering incentives.

On Tuesday, Hutchinson said starting on June 1, local health units will provide anyone who is vaccinated in their county with either an Arkansas Scholarship Lottery scratch-off ticket or Arkansas Game and Fish Commission gift certificates that will be able to be redeemed for fishing and/or hunting licenses.

“These will be distributed at our local health units and at special events across the state,” he said. “We also hope to have special vaccination clinics from time to time at which they would be immediately available.”

Hutchinson said those who are vaccinated will be able to choose between either the scratch-off or the AGFC certificates.

Eric Hagler, director of the Arkansas Scholarship Lottery, explained that those who choose the scratch-off will receive the $20 “$1 Million Spectacular” scratch-off, for which there are currently two $1 million cash prizes.

“You could be Arkansas’ next millionaire,” he said.

Everyone who takes a scratch-off will have a one in three chance to win some cash prize, he said, and those who don’t win anything can visit the Arkansas lottery website, enter the code on their card and have a second chance to win.

Hagler noted that only Arkansans 18 and up are eligible to play the lottery.

Pat Fitts, executive director of the AGFC, said those who opt for the gift certificates will get two certificates valued at $10.50, both of which can be redeemed for a fishing license and/or for a small game hunting license.

“You’ll be able to redeem that gift certificate at any license dealer or online to get your actual license,” Fitts said.

Hutchinson said 50,000 scratch-offs and 50,000 gift certificates have been allocated toward the incentive program at a cost of $2 million.

“If it is successful, if it actually encourages people and we increase the number that’s getting the vaccine, then we can increase that funding and put more resources into it,” Hutchinson said.

He said 50% of the state’s adult population had gotten at least one vaccine dose by Tuesday.

Additionally, the ADH has organized three vaccine clinics this weekend at state parks in Arkansas. On May 29, vaccine clinics will be held at DeGray Lake Resort Park from 10 a.m. to 1 p.m.; at Mississippi River State Park from 9 a.m. to noon; and at Petit Jean State Park from 9 a.m. to 2 p.m. Those who are vaccinated at any of those clinics will be entered to win two nights of lodging at any Arkansas state park, Hutchinson said.

“This weekend is Memorial Day weekend, and it kicks off the summer vacation period, and we should remember a few things as we enter the Memorial holiday: first of all, the reason for the holiday, and that is to remember those that have given their life in service to our country,” he said. “But it’s also a time for family, time for travelling, it’s time for enjoying our state parks and a time for seeing our rivers and our lakes.”