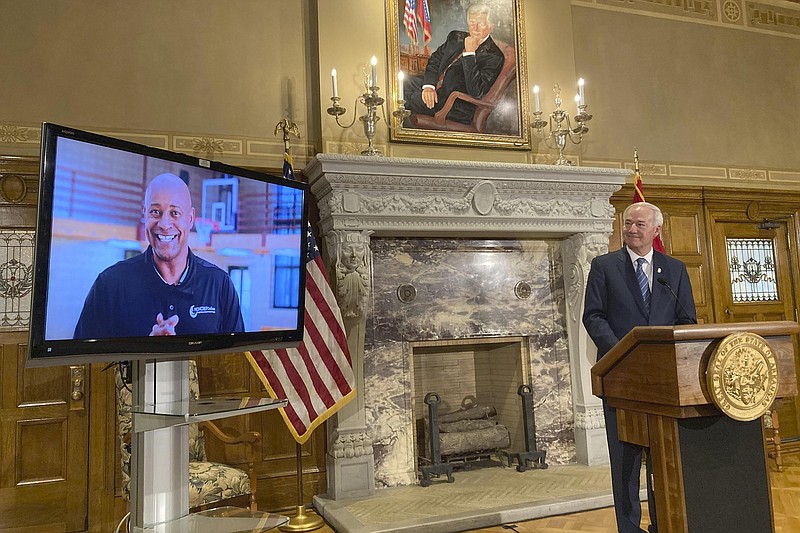 Arkansas Gov. Asa Hutchinson watches an ad at the state Capitol in Little Rock on Thursday, featuring former NBA star Sidney Moncrief that’s airing to encourage people to get the coronavirus vaccine. Hutchinson announced the state’s emergency declaration issued because of the virus would expire at the end of May. (AP Photo/Andrew Demillo)

LITTLE ROCK, Ark. — Gov. Asa Hutchinson on Thursday said he won’t seek another extension of the emergency he declared because of the coronavirus pandemic, allowing to it expire at the end of the month.

Hutchinson said the the declaration that he first issued March 11, 2020, because of the pandemic will expire May 30.

“The public health concerns remain, and everyone in Arkansas needs to continue to take the virus seriously and to act accordingly,” Hutchinson said at a news conference. “The fact that I’m ending the public health emergency should not diminish anyone’s intensity on the need to get a vaccination, or the need to protect from the virus that is still remaining in parts of our communities.”

The Republican governor had already lifted the restrictions he had issued because of the virus, including a statewide mask mandate. Lawmakers this year also placed new limits on his emergency powers, expanding their ability to end declarations and orders issued because of them.

Hutchinson also noted that several of the executive orders he had issued in response to the pandemic, including loosened restrictions on telemedicine, were written into law by the Legislature this year.

Hutchinson also announced additional efforts aimed at increasing the state’s virus vaccination rate, which remains one of the lowest in the country. They include a $6.4 million ad campaign and another $2 million campaign aimed at minority communities.

Nearly 38% of the state’s population has received at least one dose of the vaccine and about 29% are fully vaccinated, according to the Centers for Disease Control and Prevention.

The ads include one featuring former NBA star and Arkansas native Sidney Moncrief.

The governor also said that the state is offering $100 bonuses for executive branch employees who have received at least one dose of the vaccine. The bonuses would cost the state $3.6 million if 70% of the 25,772 employees get a shot, he said.

Hutchinson said the cost of the bonuses, which can be issued retroactively for people already vaccinated, can be absorbed by the agencies but he planned to seek reimbursement through the latest federal coronavirus relief package.