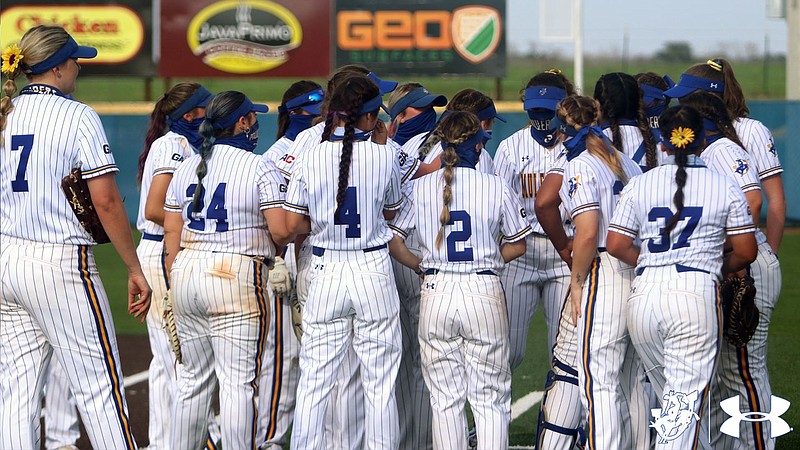 SAU gathers together during a recent game. The softball team will open GAC Tournament play at Bentonville at 1:30 p.m. Friday against Arkansas-Monticello (SAU Sports)

With the GAC Tournament right around the corner, the conference announced their end-of-year awards as well as their all-conference teams, and the 19th-ranked Muleriders have eight players named amongst the three teams.

The eight all-conference selections is the joint-most for the Muleriders in the GAC; they also placed eight players on the all-conference teams in 2018.

They are buoyed by four players on the first team and a pair of Muleriders on the second team and the honorable mentions.

Victoria Taylor becomes the ninth player in conference history to be named a four-time all-conference selection; she also joins former Muleriders Jill Roye, Maddie Dow and Brooke Goad (who was named first-team three times) as the only players to be named to the first team twice.

Taylor’s battery mate, Laina Suesue, receives her second all-conference honor, being named to the first team this spring after being an honorable mention in 2019. The southpaw catcher has been consistent behind the plate in her three season in Magnolia, having started all 116 games since joining the Muleriders.

The Salt Lake City product is hitting .351 this season with six homeruns and 28 RBIs. She has also drawn a team-high 29 walks, only striking out ten times. Defensively, the senior has only committed two errors this season.

Suesue’s fellow Utahan, Alese Casper, receives a nod onto the conference’s first team for her exploits in centerfield this season for the Muleriders. The southpaw is hitting a team-best .406 at the plate, the third-best average in a season in the program’s history. Casper has also stolen a team-high three bases and has not committed an error this season, chipping in a pair of assists from the outfield.

The final player on the first team for the Muleriders is designated player Elisa Favela. Favela joins Taylor, Roye, Dow and Goad as players to be named to the first team twice, having also done so in 2019. The Hawaiian leads the team in doubles, homeruns and slugging percentage, also batting .340 with 26 RBIs.

The Muleriders feature a pair of players on the second team who receive all-conference honors for the second time upon asking: pitcher Sydney Wader and second baseman Sarah Evans.

Wader, the 2019 GAC Pitcher of the Year, only allowed six extra-base hits all season, allowing an opponent batting average of .221. The Vilonia native owns a 1.71 ERA and a 7-3 record, throwing nine complete games and 53 strikeouts in 77.2 innings pitched.

Evans, who was a second-team all-conference selection for the second time, receives the honor at second base, having received it at shortstop in 2019. The sophomore is hitting .318 and holds a tie for the team lead in RBIs with 28. The Bryant native is slugging .588 and owns a .438 on-base percentage.

The honorable mentions include a senior and a freshman – Faith Otts and Jaxynn Dyson. Otts becomes the eighth player to be named to the all-conference team twice, while this is Dyson’s first honors.

Having started the past 209 games for the Muleriders at third base, Otts has been a cornerstone in the Mulerider lineup for the past five seasons. This season, the Haskell native is hitting .317 with seven homeruns and is tied for the team lead with 28 RBIs. The senior has only struck out eight times this season, and defensively, has only committed two errors at the hot corner, owning a fielding percentage of .978.

The Muleriders, along with Southeastern Oklahoma, are one of two teams to have 20 First Team selections in the GAC; there have been 37 Muleriders named as an all-conference selection under head coach Jason Anderson.

The Muleriders compete this weekend at the GAC Tournament, where they enter as the top seed for the third year in a row; they start off on Friday at 1:30 against Arkansas-Monticello.