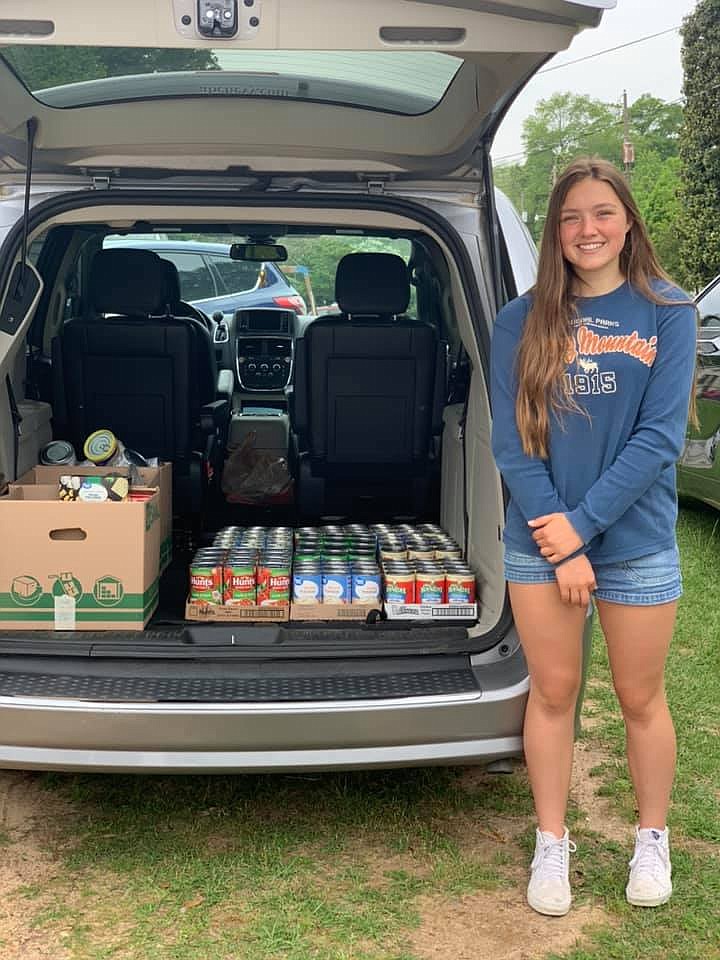 Kate Slaton, a sophomore at the Magnolia School District, held a canned food drive that brought in a donation equivalent to $234.10. (submitted photo)

“I have always been interested in doing some more community service,” said Kate Slaton. “One of my friends’ moms worked at Compassions Foundations so I just figured that was a great place to start.”

Kate, a sophomore at Magnolia High School, said that for a long time, she wanted to do something for her community but didn’t think that she could. She said that she did a pageant back in 2019, and all of the girls had a platform of community service, some working with specific groups and others working towards certain goals. After witnessing what the other girls were working towards, Kate realized that she could make a difference in her community.

Kate said she contacted Compassions Foundation last semester, stating that she had an interest in offering the organization some assistance. After speaking with Amy Curtis at the foundation, Kate wrote a proposal to Magnolia High School Principal Chris Carter requesting permission to host a canned food/non-perishable item drive during school hours.

After Carter approved her plan, Kate went to all of the teachers, asking them if she could place a donation box in their classrooms. According to Lacey Ogle from Compassions Foundation, the total value of the donation from Kate’s drive was $234.10. Feeling accomplished, Kate explained that there was still more work to be done for exploited women and children.

“Right now, I think I want to be a family lawyer, because I feel like a lot of kids do not have someone advocating for them,” said Kate. “They just have a lawyer who wants to win a case. I want to be someone who advocates for the kids in those situations. I think I can help in those situations and I would really like to make it easier for the kids, because they shouldn’t have to deal with anything other than going to school.”

As for now, Kate said that she is thinking about ways that she can make the canned food drive for Compassions Foundation a yearly event. She said that she is interested in trying to branch it out to the middle school and is looking at different incentives like pizza parties as a way to encourage students to donate to the cause.

“I am thankful for all the students, teachers and administrators that helped me and allowed me to do this,” said Kate. “It was an awesome experience!”