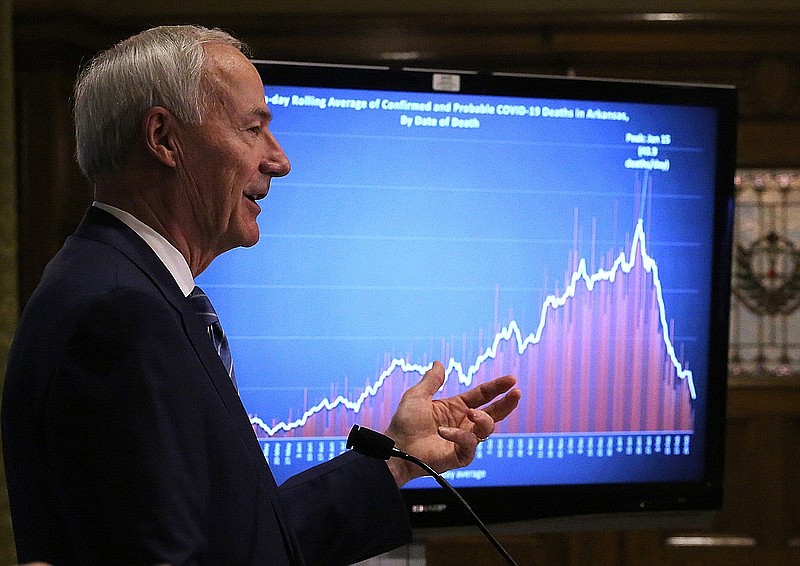 “I set a goal that, if we have low hospitalizations and we continue to reduce our cases [and] our positivity rate is low, then we can lift the mask mandate,” he said on CNN’s “State of the Union.”

“We’re making those goals, so I expect that to be lifted. It’s not going to take away from the seriousness of the virus and that we’ve got to continue to pay attention,” he said.

The number of COVID-19 hospitalizations in Arkansas fell to 192 on Sunday, down from 233 on Friday, marking the first time it has been below 200 since June, the Arkansas Department of health reported.

At its peak in early January, the number of daily COVID-19 hospitalizations in Arkansas topped 1,300.

Asked by CNN’s Dana Bash why there is “so much hesitancy among so many of your fellow Republicans” to the immunization efforts, Hutchinson said, “I’ve thought a lot about that, and I think it’s a natural resistance to government and skepticism of it.”

“You look at the breadth of support here in Arkansas for [former] President [Donald] Trump, and you have rural voters and you have minority voters, and the hesitancy is worrisome, not just here but all across the country,” he said.

While Trump won 62.4% of the popular vote in Arkansas, he received 46.9% nationwide.

The 45th president was vaccinated before leaving office, a fact that was not disclosed until more than a month after he left.

While supply did not keep pace with demand during the first three months of the vaccine rollout, shot access has accelerated in recent weeks.

Persuading people to get vaccinated will be more difficult once half the population has received the shots, Hutchinson predicted.

“It’s about overcoming the skepticism. It is about education — we’re going through that effort here — but it’s also confidence,” he said. “As people see others getting the vaccination [and] the importance of it, I expect that acceptance rate to continue and to go up.”

During his appearance, Hutchinson predicted that Arkansans would voluntarily comply with masking recommendations, even if the mandate is lifted.

“I expect, even though we take the mask mandate away, that people will continue to use the mask when you cannot socially distance and whenever there’s the risk of the virus,” he said. “Common sense is going to replace mandates, and I think that’s where we are right now. You cannot go beyond the toleration of the American public.”

Afterward, Democratic Party of Arkansas Chairman Michael John Gray told the Arkansas Democrat-Gazette that the decision to lift the mask mandate should be based on science and data, particularly the number of people vaccinated, “not on the politics.”

“If he can show me the science and the methodology and the logic that he’s basing it [on], I could say whether I thought it was a good idea. But, like everything he’s done, he’s just been bending to the political winds,” Gray said in an interview.

During his CNN appearance, Hutchinson also answered a question about anti-Asian violence.

Noting that Trump had referred to COVID-19 as the “Kung Flu” and that another Republican politician had criticized China during a recent hearing on anti-Asian violence, CNN’s Bash asked whether those types of comments “fuel hate against Asian Americans.”

“Well, it doesn’t help,” Hutchinson replied. “It doesn’t give us a sense of understanding of people and a toleration of people. Anytime you lump them together and paint them as somebody that’s an enemy of our country, it does spill over. … Words do matter.”

“We have a large number of Asian Americans here in Arkansas that contribute mightily to our economy and to our diversity and to our well-being,” he said.

Hutchinson told Bash that Arkansas and other parts of the country need hate-crimes laws.

“If you’re going to target someone because of their race or their characteristics, then you ought to have additional penalties that go with that,” he said.

Asked about Arkansas’ new law that bans abortion, even in cases of rape or incest, Hutchinson said he would have preferred an exception in those instances.

Hutchinson said he signed the legislation anyway “because it is a direct challenge to Roe v. Wade,” the 1973 Supreme Court case that struck down the nation’s anti-abortion laws.

The state’s new law “is not constitutional under Supreme Court cases right now,” Hutchinson said. “I think there’s a very narrow chance that the Supreme Court will accept that case, but we’ll see.”

Gray, the Democratic Party chairman, portrayed the law Sunday as extreme, emphasizing its ban on abortion in cases of rape or incest.