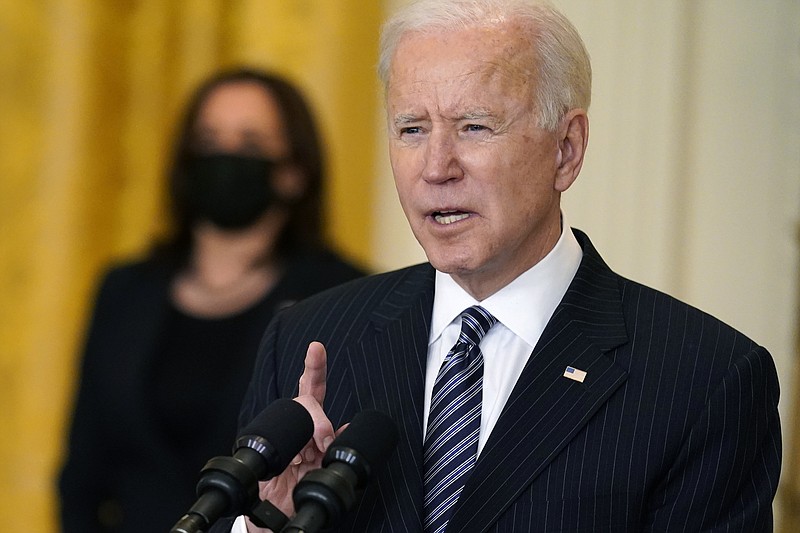 President Joe Biden speaks about COVID-19 vaccinations, from the East Room of the White House on Thursday in Washington, as Vice President Kamala Harris listens.

WASHINGTON — The United States has cleared President Joe Biden’s goal of injecting 100 million coronavirus shots, more than a month before his target date of his 100th day in office.

This as the president prepared to set his sights higher in the nationwide vaccination effort. The nation is now administering about 2.5 million shots per day. Biden, who promised to set a new goal for vaccinations next week, suggested the possibility of setting a 200 million dose goal by his 100th day in office.

He told reporters Friday, “We may be able to double it.” His comments come as the U.S. is on pace to have enough of the three currently authorized vaccines of Pfizer, Moderna and Johnson&Johnson to cover the entire adult population just 10 weeks from now.

The pace is likely to dramatically rise later this month with an expected surge in supply of the vaccines, putting a 200 million dose goal within reach.

CASES: The seven-day rolling average for daily new cases in the U.S. decreased over the past two weeks from 62,263 on March 4 to 54,453 on Thursday, according to Johns Hopkins University.

DEATHS: The seven-day rolling average for daily new deaths in the U.S. decreased over the past two weeks from 1,784 on March 4 to 1,238 on Thursday, according to Johns Hopkins University.

— US clears 100M vaccinations, President Biden next aims for 200M

HERE’S WHAT ELSE IS HAPPENING:

BOISE, Idaho — The Idaho Legislature has voted to shut down for several weeks due to an outbreak of the coronavirus.

At least six of the 70 House members have tested positive for the illness in the last week, and there are fears a highly contagious variant of COVID-19 is in the Statehouse.

Four of those who tested positive are Republicans. Another Republican lawmaker is self-isolating. The chamber has a super-majority of 58 Republicans, most of whom rarely wear masks. All the Democratic lawmakers typically wear masks.

Three of the infected lawmakers had participated in debates on the House floor this week. Lawmakers in the House and Senate made the decision despite significant unfinished business, including setting budgets and pushing through a large income tax cut.

Two senators had contracted the coronavirus but have recovered and returned to the 35-member Senate.

That’s when all adults will become eligible. Also on Monday, counties that have largely completed vaccinating residents who are 65 or older can begin administering shots to the next eligible groups, along with migrant and seasonal farmworkers working in the county.

GENEVA — The World Health Organization’s expert committee on coronavirus vaccines says its review of the AstraZeneca vaccine indicates it has “tremendous potential to prevent infections and reduce deaths.”

In a statement published Friday, the U.N. health agency said “the available data do not suggest any overall increase in clotting conditions” and the reported rates of blood clots after vaccination with COVID-19 shots are in line with the expected number of diagnoses of these conditions.

WHO says while some very rare clots have been detected after a few people received the AstraZeneca vaccine in Europe, “it is not certain that they have been caused by vaccination.”

Similar to advice issued by the European Medicines Agency and governments across the continent this week, WHO says health officials and patients should be vigilant in monitoring any potential side effects from vaccines and report them.

DeSantis criticized the decision on Friday.

“It’s not his decision to make,” DeSantis said. “Orange County is below the state average in seniors vaccinated. They’re at 63%. Trying to do healthy 40-year-olds over finding maybe some more seniors, to me, would not be the direction I would go.”

On Friday, Miami-Dade Mayor Daniella Levine Cava said she would open her county’s sites to those 40 and older.

WARSAW, Poland — Countries across Europe are resuming vaccinations with the AstraZeneca shot.

Leaders sought to reassure their populations it is safe following brief suspensions that cast doubt on a vaccine that is critical to ending the coronavirus pandemic.

France’s prime minister rolled up his sleeve to get the shot Friday, as did a handful of other senior politicians across the continent.

Inoculation drives in Europe have repeatedly stumbled and several countries are now re-imposing lockdowns as infections rise in many places. The suspensions came after reports of blood clots in some recipients of the vaccine. On Thursday, the European Medicines Agency said the vaccine doesn’t increase the overall incidence of blood clots.

The third death was a 46-year-old Cambodian man who was admitted to the Khmer-Soviet Friendship Hospital in the capital Phnom Penh on March 9 and diagnosed with the coronavirus the next day.

The second victim, whose death was announced earlier Friday, was a 62-year-old Cambodian woman who was admitted Wednesday and had underlying health issues including diabetes and high blood pressure.

Cambodia on March 11 confirmed its first death from COVID-19 as it battles a new local outbreak that has infected hundreds of people. The victim was a 50-year-old man Cambodian man who became infected last month while working as a driver for a Chinese company in the coastal city of Sihanoukville.

Cambodia has confirmed 1,578 cases of the coronavirus.

COPENHAGEN, Denmark — Finland decided Friday to pause the AstraZeneca COVID-19 vaccine for a week out of precaution while the Nordic country is investigating two suspected cases of blood clots.

Two women in their 20s “have reacted and we do not know why,” said Hanna Nohynek of the Finnish Institute of Health and Welfare.

On Friday, the head of the Danish Health Agency said Denmark would wait another week before saying whether or not it would resume the vaccine. Norway and Sweden officials have said the same.

The Centers for Disease Control and Prevention guidelines, announced Friday, signal the agency’s turn away from the 6-foot distancing recommendation.

The new guidelines advise at least 3 feet of space between desks in elementary schools, even in towns and cities where community spread is high, so long as students and teachers wear masks and take other precautions.

It recommends 3 feet in middle and high schools, so long as there’s not a high level of spread in the community. If there is, spacing should be at least 6 feet.

The CDC says 6 feet should still be maintained in common areas, such as school lobbies, and when masks can’t be worn, such as when eating.

TOKYO — Tokyo organizers and the International Olympic Committee are poised to make it official that most fans from abroad will be prohibited from attending the postponed Olympics because of the coronavirus.

The announcement is expected to come after “five-party” talks this weekend with the IOC, local organizers, the Japanese government, the Tokyo metropolitan government and the International Paralympic Committee.

Sponsors with tickets who wish to attend are expected to get some type of exemption.

The Olympics and Paralympics will involve 15,400 athletes from more than 200 nations, most operating inside a ’bubble” linking venues, training facilities, and the Olympic Village. Ten of thousands of others will a arrive and operate outside the bubble — officials, judges, sponsors, media, VIPs and broadcasters.

There is widespread skepticism in Japan about holding the Olympics, and particularly about admitting fans from abroad because of the coronavirus.

The Olympics are scheduled to open on July 23. The Paralympics follow on Aug. 24.

The Scandinavian nation was the first European country to pause the use of the AstraZeneca vaccine.

“We need, together with the Danish pharmaceutical authorities and domestic experts, to dig deeper into these things,” said Soeren Brostroem, head of the Danish Health Agency, stressing it is his agency, not the Danish Medicines Agency, that decide on pausing a vaccine.

Denmark stopped the use of the AstraZeneca on March 11. Norway and Sweden then followed. Officials in those countries have said they’ll wait a week before announcing whether to resume the AstraZeneca vaccinations.

He expects 46,350 will be delivered via the COVAX initiative and 50,000 doses will be donated by neighboring Romania.

The former Soviet republic, like many countries in Europe, is experiencing a third wave of the coronavirus. This week, Moldova recorded all-time highs in cases.

Moldova, a country of 3.5 million, has recorded more than 210,000 cases and 4,472 confirmed deaths. Some 18,593 vaccines have been administered, according to officials.

ROME — Italy’s pharmaceutical agency has formally lifted its temporary ban on AstraZeneca vaccinations after the European Medicines Agency ruled the shots were safe and effective.

It wasn’t immediately clear when the first jabs would be administered, but officials said Friday the speed with which they were proceeding with the administrative restart of AstraZeneca shots was a sign of their confidence in the safety and efficacy of the vaccine.

The head of prevention at the Health Ministry, Dr. Giovanni Rezza, told a press conference that Italy only reluctantly halted the campaign out of an abundance of caution. But he said Italy needed to ramp it back up quickly to make up for lost time now that EMA had ruled.

He said Italy needed to more than double the 200,000 vaccinations per day the country had reached before the suspension to reach its goal of inoculating 80% of the population by September.

Top Italian public health officials held a press conference Friday to insist on the safety of the AstraZeneca shot in a bid to build confidence among the general population. They also defended their decision to suspend it as purely precautionary and done in consultation with other European countries in an effort to give EMA a chance to definitively rule on it.

BRUSSELS — Belgian health authorities are urging residents to limit their social contacts to a bare minimum and to opt for remote working to the greatest extent possible to prevent another wave of coronavirus infections.

Virologist Yves van Laethem says the number of positive virus cases in Belgium rose by a third over the past week, or 3,226 confirmed daily cases on average.

Hospitalizations due to COVID-19 also rose by 27% over the same period, and Van Laethem warned the number of COVID-19 patients in intensive care units could reach a critical level by April 10 if the pace of infections does not slow down.

The trends led the Belgian government to move up a meeting of Belgium’s Consultative Committee, which on Friday is expected to reconsider its decision to relax public health restrictions starting next month.

A total of 22,624 people have died of coronavirus-related causes in Belgium, a country of 11.5 million residents. The number of virus-related deaths reported daily dropped by more than 10% in the past week, which officials attributed to an intensive vaccination campaign in nursing homes.

MANILA, Philippines — The Philippines reported its highest daily jump in coronavirus cases Friday at more than 7,100.

The cases reported by the Department of Health Friday brings the total number of infections to more than 648,000 and 12,900 confirmed deaths. The totals are the second highest in Southeast Asia after Indonesia.

President Rodrigo Duterte’s administration has been gradually reopening businesses to revive the economy and ease unemployment and hunger but it has started to roll back those actions after infections spiked this month. Manila’s economy has been hit by one of the worst recessions in the region due to more than a year of lockdowns, quarantine restrictions and business shutdowns.

Other businesses and activities being suspended from Friday to April 4 were driving schools, libraries, museums, cultural centers and some tourist attractions in metropolitan Manila and other key cities under a general quarantine.

The government has also decided to temporarily ban the entry of foreigners for a month, except diplomats and authorized officials of international organizations, starting Monday. Officials have blamed the infection spike to the spread into the Philippines of coronavirus strains from other countries and public complacency.