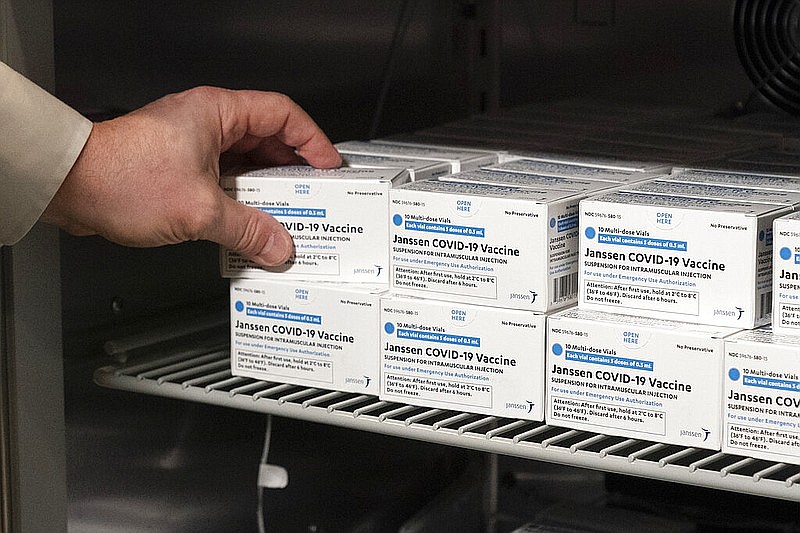 A day after Gov. Asa Hutchinson extended eligibility for the coronavirus vaccines to almost 1 million Arkansans, some providers said they still had appointments available for people to get the shots this week.

The move Tuesday into Phase 1-C of the state’s vaccine plan made the shots available to people age 16 to 64 with health conditions putting them at risk of severe illness from the virus and certain types of “essential workers,” including those with jobs in food service, transportation, the media and other industries.

“As soon as the governor speaks, our phones kind of ring off the hook for a while,” Brittney Johnson, operations manager at Woodsprings Pharmacy in Jonesboro, said.

But as of Wednesday afternoon, she said she had appointment slots available for today, Friday and Saturday at mass clinics where she hopes to vaccinate several hundred people.

While many people have been eagerly awaiting the shots, “there’s still some hesitancy, which we would like to avoid” among others, she said.

“We’ve had this now for several months,” Johnson said.

Also on Wednesday, Arkansas’ count of coronavirus cases rose by 325 — a slightly larger increase than the one a week earlier — while the number of people hospitalized in the state with the virus rose for the third day in a row.

“New cases and testing are nearly identical to last week,” Hutchinson said in a statement.

“Our active cases continue to fall with over 400 fewer than last week. These numbers are encouraging, but it’s important we get vaccinated. Be patient and the supply will be increasing.”

Like Johnson, Lance Smith, owner of Smith Drug and Compounding in Hot Springs, said he had been readying plans to vaccinate a large number of people this week in the event that Hutchinson added to the list of groups who are eligible.

He said he still had appointments available this week, including 800 for an event at a church on Saturday.

About 200 people had signed up to get shots at the event as of Wednesday afternoon, he said.

“There still are a lot of people that really want to get the vaccine in this new group,” Smith said.

But he said he worries that proportion won’t be as large as it was for Arkansans age 65-69, who have been allowed to get the shots since Feb. 23, or 70 and older, who became eligible in January.

“I definitely think that there is some hesitancy out there, but I think as more and more people get the shot or get a vaccine of some kind, that stigma might change,” he said.

Baptist Health, which is offering the shots in Little Rock, North Little Rock, Fort Smith, Conway, Malvern and Arkadelphia, was booked up for appointments this week but had slots available starting on Tuesday, spokeswoman Cara Wade said.

“We do have many openings beyond Tuesday and will add additional appointments as we receive more doses of the vaccine,” Wade said in an email.

The health system is also holding a walk-up vaccine clinic in Little Rock from 9 a.m.-4 p.m. Friday at the Excel Center on the Goodwill Industries of Arkansas campus.

Goodwill Industries of Arkansas, the Arkansas Foundation for Medical Care and Rock Region Metro are also helping with the event.

The University of Arkansas for Medical Sciences’ vaccination clinic in Little Rock, which increased the number of appointments it can book for most days from 500 to 600 after Hutchinson’s announcement, had a full schedule on Wednesday, university spokeswoman Leslie Taylor said in an email.

“We are full the rest of this week but if someone calls we can likely get them in next week,” she said.

The Health Department gave shots to 257 people at a walk-up clinic on Wednesday at the Marion County fairgrounds in Summit, spokeswoman Danyelle McNeill said.

State Epidemiologist Jennifer Dillaha said it’s “a good thing” that people are able to quickly get the shots.

“I anticipate that as time goes on, there will be places where they’ll be able to get the appointments because more vaccine is available,” she said.

“We’ll see how we balance the availability of vaccine versus the demand for the vaccine.”

Although most of the state’s vaccine supply so far has gone to hospitals and pharmacies, Dillaha said the state next week will send it to more medical clinics, which she said would help get the doses to people with chronic health conditions.

She said seven medical clinics have been receiving doses directly from the state’s allotment, although some others have also received it from affiliated hospitals.

“Now that the case rates are lower and the targeted groups that will receive vaccination are people that will be their patients, we’re expecting them not to vaccinate the general public but to identify their patients who are eligible and call them in and get them vaccinated.”

Staff members at the medical clinics might also help their patients to overcome their fears of the vaccine, she said.

“It’s sometimes hard for people to get their specific questions answered by looking for it on the internet because it’s really hard to sort through some of the misinformation versus some of the accurate information,” she said.

She said the department would have liked to have sent vaccine doses to more medical clinics earlier, but “the amount of vaccine we were receiving made it difficult to spread it any thinner.”

She said the department was still working Wednesday on providing more details on the types of jobs and health conditions that allow someone to receive the shots under the state vaccination plan’s Phase 1-C that began Tuesday.

The department’s list of health conditions will include all of those that the U.S. Centers for Disease Control and Prevention has said are known to or suspected of increasing the risk of severe covid-19, she said.

According to the Health Department, providers participating in the vaccination effort coordinated by the state had received 1,329,170 doses as of Wednesday morning, up 3,970 from the total as of a day earlier.

The doses those providers reported having administered, including booster shots, rose by 14,039, to 795,387.

In addition, Walmart, Walgreens, CVS and Community Pharmacy Enhanced Services Network pharmacies had been allotted 174,380 through federal programs, a number that hadn’t changed since Tuesday.

The doses those providers reported having administered rose by 2,431, to 84,963.

According to the CDC, the number of Arkansans who had received at least one vaccine dose rose by 12,649, to 602,085, representing almost 20% of the state’s population.

Among the states and District of Columbia, Arkansas rose from No. 45 to No. 44 in the percentage of its residents who had received at least one dose.

It continued to rank 46th in the percentage of its residents who had been fully vaccinated.

Arkansas also ranked near the bottom in its percentage of its residents age 65 and older who had received shots.

The 58.3% of Arkansans in that age group who had received at least one vaccine dose was the fifth lowest in the country, and the 29.6% who had been fully vaccinated was roughly tied with Pennsylvania for that same spot.

The number of cases that were added to the state’s tallies on Wednesday was eight more than were added the previous Wednesday, March 10.

As a result, the state’s average daily increase in cases over a rolling seven-day period rose by just over one, to 297.

The number of people hospitalized with covid-19 rose by three, to 260.

The number of those patients who were on ventilators, however, fell by four, to 54.

After rising a day earlier, the number of virus patients in intensive care units as of 2 p.m. fell by six, to 116.

Dillaha said it was “hard to know” what was behind the recent increase in hospitalizations.

“I’m, of course, not happy to see the hospitalizations go up at all, but unfortunately, we still have a lot of covid-19 circulating in the state, and it’s a reminder that we cannot let off with our efforts to prevent the spread,” she said.

She said she didn’t expect the hospitalizations to continue increasing unless the state’s daily case increases rebound from their mostly downward trend this month.

She said seven of the deaths reported Wednesday happened more than a month ago. One occurred in January and six happened in February.

The cases added Wednesday included 180 that were confirmed through polymerase chain reaction, or PCR, tests.

The other 145 were “probable” cases, which include those identified through less-sensitive antigen tests.

The number of cases that were considered active fell by 67, to 2,808, as 378 Arkansans were newly classified as having recovered.

Among prison and jail inmates, the Health Department’s count of cases rose by three.

Among nursing home and assisted living facility residents, the state’s count of virus deaths rose by seven, to 2,029.

The number of the state’s virus patients who have ever been on a ventilator rose by eight, to 1,562.