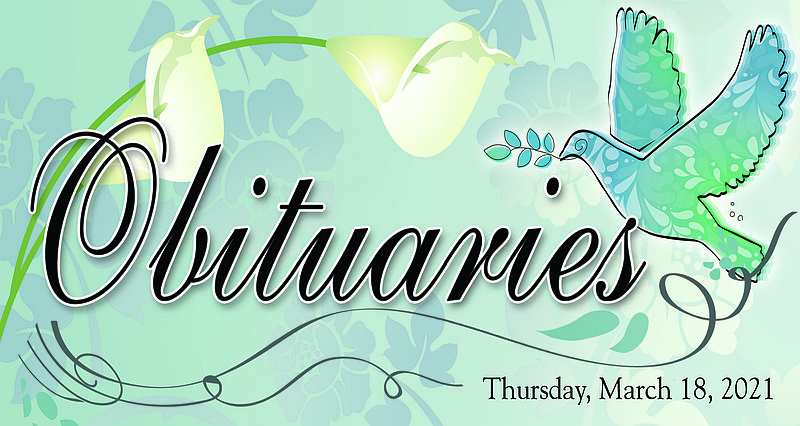 Danny Jackson, 70, of Waldo, Arkansas passed away on Tuesday, March 16, 2021 at the Magnolia Regional Medical Center in Magnolia.

Danny was born August 14, 1950 in El Dorado, Arkansas to the late Emory Wilson and Doris Aileen (Murphy) Jackson. He retired as an operator from the Albemarle Corporation and was an auxiliary deputy for the Columbia County Sheriff’s Office. He was a member of the Greer’s Chapel United Methodist Church.

Danny loved his family and after retiring, he enjoyed spending time with his grandchildren and visiting with family and friends.

A visitation will be held on today, March 18, 2021 from 6 to 8 p.m. at Lewis Funeral Home, Inc. in Magnolia. Graveside services will be Friday, March 19 at 2 p.m. at the Shiloh Cemetery in Lamartine with Rev. Dan Reid and Bro. Leroy Martin officiating.

Memorial donations may be made to the American Heart Association or the Liver Foundation.

George Quick, 88, of Marshall, TX, formerly of Magnolia, AR, passed away March 12, 2021 in Longview. He was born July 6, 1932 in Marshall to George and Lenora Williams Quick. George grew up in Marshall, graduating from Marshall High School and as so many did in those years went to work at the T&P Rail Yard, where he would start his electrician apprenticeship, and later become an electrician. He would marry Janice Eleanor Jenkins on February 4, 1956, and have a family of 4 daughters. Janice preceded him in death on April 10, 2008. Mr. Quick never met a stranger. George was always one to walk up and start a conversation, so there was never a short trip to the grocery store or to Wal-Mart. He was a a fun-loving prankster and loved dogs, frequently bringing strays home. He loved God, his wife, children, and grandchildren/great grandchildren. He was a 67-year member of the Marshall Masonic Lodge, a Master Mason. Growing up in Marshall, he loved the Marshall Depot and trains. He was a long-time member of the Central Baptist Church in Magnolia, Arkansas as well as a volunteer auxiliary member for the Magnolia Hospital. George was living at Oakwood House in Marshall, TX at the time of his death.

A time of visitation with Mr. Quick’s family was held on Sunday, March 14, 2021 from 5 to 8 p.m. at the Sullivan Funeral Home in Marshall, Texas. A Masonic graveside service was held at 11 a.m. on Monday, March 15, 2021 at Algoma Cemetery North in Marshall with Rev. Will Sherman as well as the Marshall Masonic Lodge #22.

The family would like to thank the Oakwood House staff for the loving care they provided during George’s stay.

Jimmy (Junior) Tatum, 72 of Stamps, passed away March 10, 2021 at St. Michael’s Hospital in Texarkana Texas. Hewas born November 7, 1948. A private family ceremony will be held at Smith Funeral Home Chapel at 11 a.m. with a maximum of 50 people on Saturday March 20. A public viewing will be at Lakeside Cemetery at 12:30 p.m. after the family service. There will be a visitation on Friday March 19 at the Smith Funeral Home Chapel. Mask are required during the services.