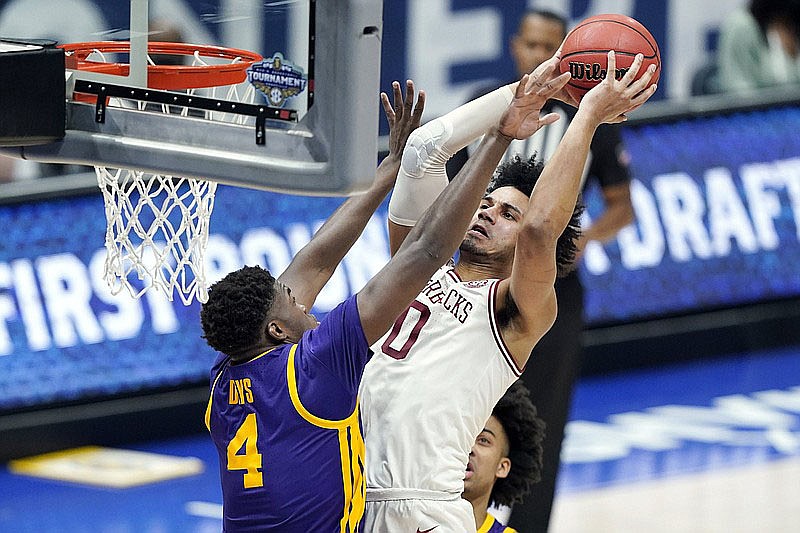 Arkansas’ Justin Smith (0) shoots against LSU’s Darius Days (4) in the second half of an NCAA college basketball game in the Southeastern Conference Tournament Saturday in Nashville, Tenn.

FAYETTEVILLE — A few minutes after Colgate was announced Sunday as the University of Arkansas basketball team’s first-round opponent in the NCAA Tournament, Razorbacks Coach Eric Musselman sounded like an expert on the Patriot League champion Raiders.

Speaking on a media Zoom call, Musselman rattled off where Colgate ranks in several national statistical categories and mentioned the Raiders’ key players by name.

Musselman said he learned all about Colgate earlier Sunday when the team traveled from Nashville, Tenn. — where Arkansas played in the SEC Tournament — to Indianapolis thanks to insight from Anthony Ruta, Arkansas’ director of operations.

“If you want to know how I know all this so soon, Coach Ruta had this thing nailed on who we were going to play,” Musselman said. “So we had a five-hour bus ride where Coach Ruta was hammering home Colgate.”

The No. 8 Razorbacks (22-6) will play Colgate (14-1) on Friday in the Indianapolis area, where all NCAA Tournament games are being played this year for safety precautions because of the coronavirus pandemic.

Where the Arkansas-Colgate game will be played in Indiana and a tip-off time will be announced later.

“I’ve never made it to the NCAA Tournament, this is my first time,” said Arkansas guard Desi Sills, a junior from Jonesboro. “Hopefully we can make a run in the tournament and just keep playing together.

“You see my face. I can’t stop smiling because it’s a wonderful feeling. I’m happy to be here, and I’m happy to put on for Arkansas.”

While NCAA Tournament games aren’t being played around the country, the selection committee still assigned teams to regions.

Arkansas is the No. 3 seed in the South Region and Colgate — located in Hamilton, N.Y. — the No. 14 seed. The Arkansas-Colgate winner will play Sunday against the winner of the Texas Tech-Utah State game.

Arkansas is playing in the NCAA Tournament for the first time since 2018 and 34th time overall. The No. 3 seed is the highest for the Razorbacks since 1995 when they were a No. 2.

“I’m glad we didn’t have to worry about if we were going to make it in or not, but we were definitely excited trying to figure out who we were going to play against,” Arkansas freshman guard Moses Moody said. “Now we can start preparing for the game.”

Moody said he didn’t yet know much about the Raiders.

“I just know that they score a lot,” Moody said. “And I hear they’ve got a lot of shooters.”

“We’ll take a look at them over the next couple days, but we’re going to take our opponent seriously because as we know — as we’ve seen in previous years — anything can happen regardless of seeding,” Arkansas senior forward Justin Smith said. “They’re going to get our utmost respect and hopefully we can come out with a win.”

Arkansas and Colgate never have met in basketball, but the last time the Razorbacks faced a Patriot League team in the NCAA Tournament, they lost to Bucknell 59-55 in a first-round game in Dallas. The Razorbacks were a No. 8 seed and the Bison No. 9.

“We believe we are one of the top teams in the country and we want to see where they seed us and show our talent against teams outside of the Patriot League because we weren’t able to do that earlier in the year,” Colgate senior guard Jordan Burns said Sunday after the Raiders beat Loyola-Maryland 85-72 in the Patriot League Tournament championship game and before the NCAA Tournament selection show. “I want the country to know we are coming to play. We aren’t here to just be happy about going to the NCAA Tournament. We’re here to actually win games.

“We want to go far in the tournament, and we believe we have a team that’s powerful enough to do so depending on who they give us. We feel like we’re very confident right now.”

The Raiders have won 13 consecutive games — all against Army, Boston University, Holy Cross, Bucknell and Loyola-Maryland — since losing to Army 75-73 at home on Jan. 3.

Matt Langel, who played at Penn and was assistant coach at Penn and Temple, has a 153-152 record in 10 seasons as Colgate’s coach, including 63-21 the last three seasons.

“We’ve already got a scouting report planned,” Musselman said. “We will continue to add depth to the scouting report as we become more and more familiar with Colgate, a really well coached team.