Prepping for extreme weather in spring 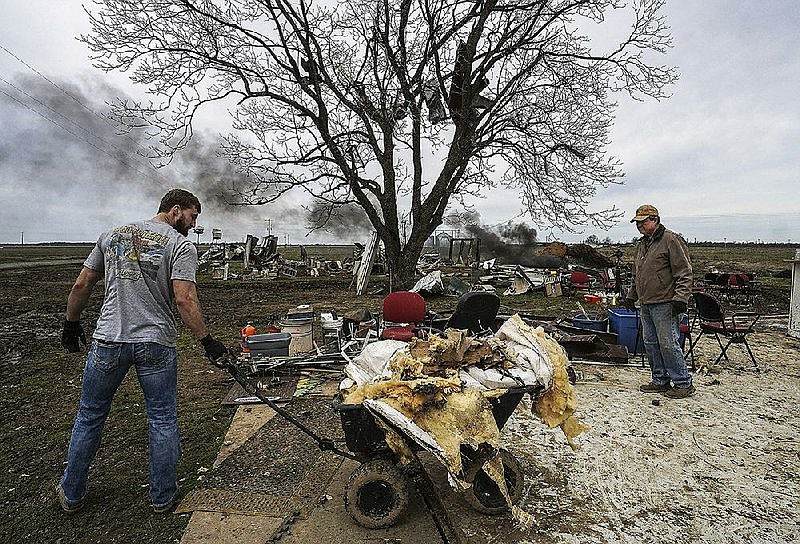 Property owners remove remnants of a former antique store in Lonoke County on March 10, 2019, after an EF1 tornado struck the area the morning prior. The storm system that also affected Magnolia brought up to 110 mph wind gusts in central Arkansas, according to the National Weather Service

For the most part, Columbia County residents were shielded from many of the issues that occurred in nearby southern states during the winter storm that began on Feb. 15.

Power outages occurred once, affecting the northeast area of Magnolia near Southern Arkansas University for around 45 minutes. Water systems remained mostly unaffected, with Waldo Waterworks customers the only county residents afflicted with a boil water notice, which began Feb. 19 and ended Feb. 26.

According to a report from the Washington Post, 58 people died during the extreme winter weather conditions, with 32 of those deaths occurring in Texas. Causes of those deaths ranged from hypothermia, falls from slipping on ice and carbon monoxide poisoning from running generators in an attempt to find warmth.

While National Weather Service (NWS) climate data indicates that winter weather is over in Columbia County this year, the need to prepare for extreme weather conditions remains. Spring weather has the potential of flooding, thunderstorms and tornadoes - sometimes all three at the same time. The individual’s response to these extreme weather conditions can become a matter of life or death.

The following instructions are guidelines from the Federal Emergency Management Agency (FEMA) and the NWS on how residents can protect themselves during extreme weather conditions.

In Arkansas, flooding in the spring can be caused by rain, storm surges and the overflow of dams and other water systems. Some floods will develop slowly while others, such as flash floods, can come with no warning. Flooding can cause power outages, disrupt transportation, damage buildings and create landslides.

“Turn around, don’t drown!” is a slogan used by both the NWS and FEMA, urging residents to not risk passing through flooded areas or driving on flooded roadways. FEMA states that 6 inches of moving water can knock a person down, while one foot of moving water generates enough force to sweep a vehicle away.

Responding to floods depends on where a resident is located and the amount of warning time given for flooding. When in one’s home, one should pay attention to water levels in the surrounding area. Should water begin making its way into one’s home, FEMA recommends going to the highest level. If it is a single-floor household and water levels continue to rise, go to the roof. Do not go into a closed attic; one could become trapped inside if the water levels continue to rise.

Outside of the home, experts recommend not travelling across moving waters. One should avoid crossing bridges with fast-moving water, which can wash a bridge away without warning. Should one’s vehicle fall into the water, they should stay inside their vehicle if it is trapped in rapidly moving water and get on the roof if the water is rising inside and evacuate if told to do so.

After the flood, listen to information and instruction from authorities. Avoid driving except in emergencies. Snakes and other animals may have sought refuge inside homes. Do not touch electrical equipment if it is wet or if standing in water. Avoid wading floodwater, which can be contaminated and contain dangerous debris. Underground or downed powerlines can also charge the water.

FEMA states that lighting is a leading cause of injury and death from weather-related hazards, yet it isn’t the only issue that thunderstorms bring. Thunderstorms can generate winds over 50 miles per hour, create hail and cause flash flooding and tornadoes.

“A sturdy building is the safest place to be during a thunderstorm,” FEMA states in its Thunderstorms and Lighting guidelines.

If indoors, avoid running water or using landline phones, because electricity can travel through plumbing and phone lines. To protect one’s property, unplug appliances and secure and outside furniture.

If boating, travel to land and find shelter. If one is unable to get into a building, they should take shelter in a vehicle with a metal top and sides, being careful to not touch anything metal.

Tornadoes can bring intense winds of over 200 miles per hour and destroy buildings, flip cars and create flying debris. If inside, one should stay in the basement or cellar. Those that live in a home without basements should take cover in a small interior room on the lowest level of their home. Stay away from windows, doors and outside walls.

Do not try to outrun a tornado. Do not get under an overpass or a bridge but instead find a low, flat location. One should cover their head and neck to protect themselves from flying debris.

After the tornado is over, keep listening to local authorities for updated information. If trapped, cover your mouth with a cloth or mask to avoid breathing dust. Try to send a text, bang on a wall or use a whistle instead of shouting. Do not drive over fallen power lines.

All three extreme weather conditions above have the potential to cause power outages. While temperature control in the coming months may not be a life or death scenario, power outages can cause food spoilage and water contamination.

During a power outage, keep freezers and refrigerators closed. According to FEMA, a refrigerator will keep food cold for about four hours and a freezer will keep its temperature for about 48 hours. Unplug appliances to protect them from potential surges or spikes that can cause damage when the power returns.

In the aftermath of any emergency, FEMA says it is normal to feel anxious or stressed. The organization recommends engaging with the community virtually and through phone calls and to talk to somebody if one is feeling upset.