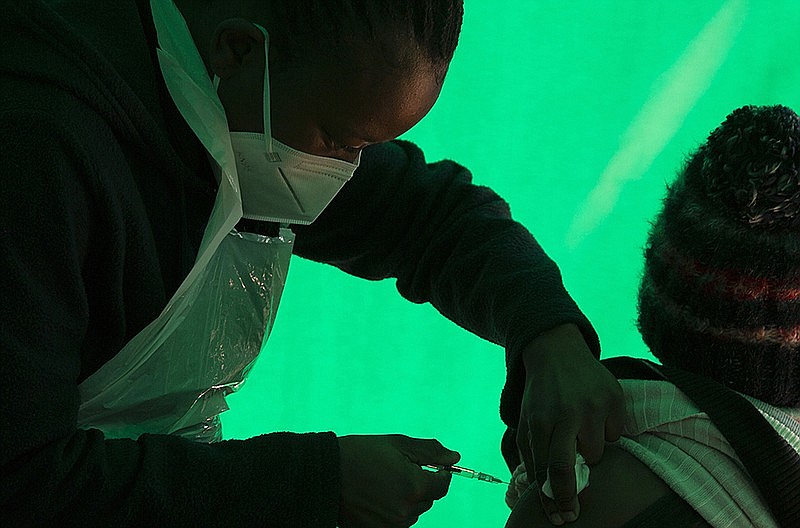 An older patient receives a dose of the Pfizer covid-19 vaccine Thursday in a clinic at Orange Farm near Johannesburg. South Africa began vaccinating its elderly residents nearly three weeks ago. (AP/Denis Farrell)

The Biden administration Thursday announced a plan to share 25 million doses of coronavirus vaccine globally in what officials described as a down payment on tens of millions more doses to come as the United States has faced criticism about hoarding vaccines.

Officials said they would share at least 80 million doses globally by month’s end — sending about three-quarters of the total through international public health organizations, while reserving the remaining quarter for direct donations to handpicked nations.

“We are sharing these doses not to secure favors or extract concessions. We are sharing these vaccines to save lives and to lead the world in bringing an end to the pandemic, with the power of our example and with our values,” President Joe Biden said in a statement.

The Biden administration has been under pressure to share doses from the nation’s vaccine stockpile, particularly as the pandemic recedes in the United States while continuing to surge abroad. More than half of Americans have received at least one shot of a coronavirus vaccine, according to The Washington Post’s tracker, compared with about 1 in 10 people globally. Scientists also warn that the virus’s global spread remains a threat, as mutations that emerge abroad can return to threaten Americans.

About 11 billion doses are needed to vaccinate 70% of the world’s population against the coronavirus, according to estimates from researchers at Duke University. As of last month, the analytics firm Airfinity estimated that 1.7 billion doses had been produced.

“As long as this pandemic is raging anywhere in the world, the American people will still be vulnerable,” Biden said in a statement. “And the United States is committed to bringing the same urgency to international vaccination efforts that we have demonstrated at home.”

The announcement came just hours after World Health Organization officials in Africa made a new plea for vaccine sharing because of an alarming situation on the continent, where shipments have ground to “a near halt” while virus cases have spiked over the past two weeks.

The announcement also comes a week ahead of Biden’s plan to attend a Group of Seven meeting in Britain, where leaders are expected to focus on steps to close the widening gap between countries with access to coronavirus vaccines and those without. For months, public health officials, the leaders of developing nations and foreign experts have warned of what they call “vaccine apartheid,” urging rich countries, particularly the United States, to do more to share surplus doses and boost total supply.

Under the White House approach, about 19 million of those initial 25 million doses would be shared with COVAX, the WHO-backed initiative to distribute vaccine doses around the globe. White House officials said they intend about 7 million doses of the COVAX share to go to Asia, 6 million to Latin America and the Caribbean, and 5 million to Africa, working with global partners such as the Africa Centers for Disease Control and Prevention.

Meanwhile, the United States would directly share about 6 million doses with nations experiencing severe coronavirus outbreaks, including India, which has been hit hard by the virus in recent weeks.

A White House fact sheet lists more than 40 individual nations where Biden intends to share vaccines, a diverse group that includes allies such as Brazil and Taiwan, and also international aid priorities such as the West Bank and Gaza. While other nations have been less prescriptive when donating vaccines to global aid organizations — attaching no strings about where the doses go — public health leaders sidestepped questions about the United States’ earmarks, instead heralding the size of its contribution.

“This announcement allows us to quickly get more doses to countries in a strained global supply climate — meaning front line workers and at-risk populations will receive potentially lifesaving vaccinations and bringing us a step closer to ending the acute phase of the pandemic,” Seth Berkley, CEO of Gavi, the Vaccine Alliance, said in a statement.

Jeff Zients, Biden’s coronavirus response coordinator, added that “this is just the beginning. Expect a regular cadence of shipments around the world, across the next several weeks.”

The initial tranche of 25 million doses will include shots already authorized for the United States, produced by Pfizer-BioNTech, Moderna and Johnson & Johnson. The donations will not include tens of millions of doses developed by AstraZeneca, which are still undergoing a U.S. safety review.

Humanitarian groups such as Doctors Without Borders said the White House plan was insufficient given the urgent global need, although policy experts credited the White House for trying to navigate competing priorities.

“It’s an announcement that checks a lot of boxes for the United States: It demonstrates support for COVAX, the multilateral approach to solving this crisis, and it responds to pleas from countries in regions who have not received many vaccines,” said Thomas Bollyky, a senior fellow at the Council on Foreign Relations and director of its Global Health Program.

“The issue is that it is a relatively small amount of vaccines spread over a lot of countries,” Bollyky added.

Biden has committed to providing other nations with all 60 million U.S.-produced doses of the AstraZeneca vaccine, which has yet to be authorized for use in America but is widely approved around the world. The AstraZeneca doses have been held up for export by a weekslong safety review by the Food and Drug Administration, and without them Biden will be hard-pressed to meet his sharing goal.

The White House says the initial 25 million doses announced Thursday will be shipped from existing federal stockpiles of Pfizer, Moderna and Johnson & Johnson vaccines. More doses are expected to be made available to share in the months ahead.

The inequities revealed by the pandemic have been felt on a global scale, with a small number of relatively rich nations securing a disproportionate share of near-term supply and leaving much of the world to fend for itself.

The picture around the world, especially in poorer nations in Africa, and Central and South America, where vaccination rates are much lower, is bleak. According to data from Johns Hopkins University, Argentina, Colombia, Paraguay and Uruguay are all awash in new cases; in Colombia, nearly 500 people a day have died of the coronavirus over the past several weeks. A sudden, sharp rise in coronavirus cases in many parts of Africa could amount to a continental third wave, the WHO warned Thursday.

Some African nations have less than 1% of their populations partly vaccinated, according to data from the Our World in Data project at the University of Oxford, and the percentages of vaccinated people in Honduras and Guatemala are around 3% of the population.

U.S. national security adviser Jake Sullivan said the administration had decided to give priority to “neighbors” of the United States, including countries like Colombia, Ecuador, Guatemala and Peru, while also working with existing regional networks like the African Union to allow local authorities to allocate the vaccines as they see fit.

Since Biden’s announcement last month that he planned to distribute a share of the nation’s vaccine surplus, global leaders have waited to see how that would be doled out. The framework announced Thursday shows the administration trying to signal support for multilateral efforts by sending 75% of doses through COVAX, with Biden officials crediting global health organizations for their existing expertise in licensing and distributing vaccines.

White House officials also tried to distinguish the U.S. strategy from the vaccine diplomacy practiced by China and Russia, two countries that have sought to use their coronavirus vaccine stockpiles to bolster alliances and influence.

But the same officials acknowledged the value of hand-selecting some nations to receive shots, including neighbors such as Canada and Mexico.

Sullivan said the U.S. “will retain the say” on where doses distributed through COVAX ultimately go.

But he also said: “We’re not seeking to extract concessions, we’re not extorting, we’re not imposing conditions the way that other countries who are providing doses are doing. … These are doses that are being given, donated free and clear to these countries, for the sole purpose of improving the public health situation and helping end the pandemic.”

Sullivan singled out the decision to share 1 million Johnson & Johnson doses with South Korea, for instance, saying the goal was to protect American forces stationed there, as well as “the Korean troops … standing shoulder-to-shoulder with us in that country.”

“It is a unique case — and the kind of unique case for which we want to retain some flexibility,” Sullivan said.

Looking ahead to the Group of Seven meetings, public health officials and advocates are set to press the Biden administration and the leaders of other wealthy nations for details on whether G-7 countries will follow the United States and support patent waivers for coronavirus vaccines, or take other steps to boost manufacturing around the world.

About two-thirds of Americans say the United States should take a major role in sharing vaccines abroad, according to a Kaiser Family Foundation poll released Thursday. The Biden administration has also faced bipartisan scrutiny on Capitol Hill for its lack of detailed plans to share vaccines, particularly as rivals such as China and Russia have provided them to dozens of countries.

As part of its purchase agreements with drug manufacturers, the U.S. controlled the initial production by its domestic manufacturers. Pfizer and Moderna are only now starting to export vaccines produced in the U.S. to overseas customers. The U.S. has hundreds of millions more doses on order, both of authorized and in-development vaccines.

The White House also announced that U.S. producers of vaccine materials and ingredients will no longer have to prioritize orders from three drugmakers working on covid-19 shots that haven’t received U.S. approval — Sanofi, Novavax and AstraZeneca — clearing the way for more materials to be shipped overseas to help production there.

Tom Hart, the acting CEO of the One Campaign, a global anti-poverty organization, said he was disappointed that the United States had not yet donated the AstraZeneca doses since it is not using them. The company’s shots, which have received emergency authorization abroad, remain under review by U.S. officials.

“The administration will soon have hundreds of millions of surplus doses to donate,” Hart said in a statement. “Now is the time to make that clear and push other countries with surpluses to do the same.”

U.S. officials said they would make further donations to COVAX, which is co-led by the WHO, the Coalition for Epidemic Preparedness Innovations and Gavi. The organization aims to vaccinate 20% of participating countries by the end of the year — a relatively modest target that may not be met thanks to a supply crunch compounded by the crisis in India. To date, it has delivered just under 80 million doses to 129 countries.

Information for this article was contributed by Dan Diamond, Emily Rauhala and Laurie McGinley of The Washington Post; by Zeke Miller, Christopher Sherman, Gerald Imray and Jamey Keaton of The Associated Press; and by Sheryl Gay Stolberg of The New York Times.