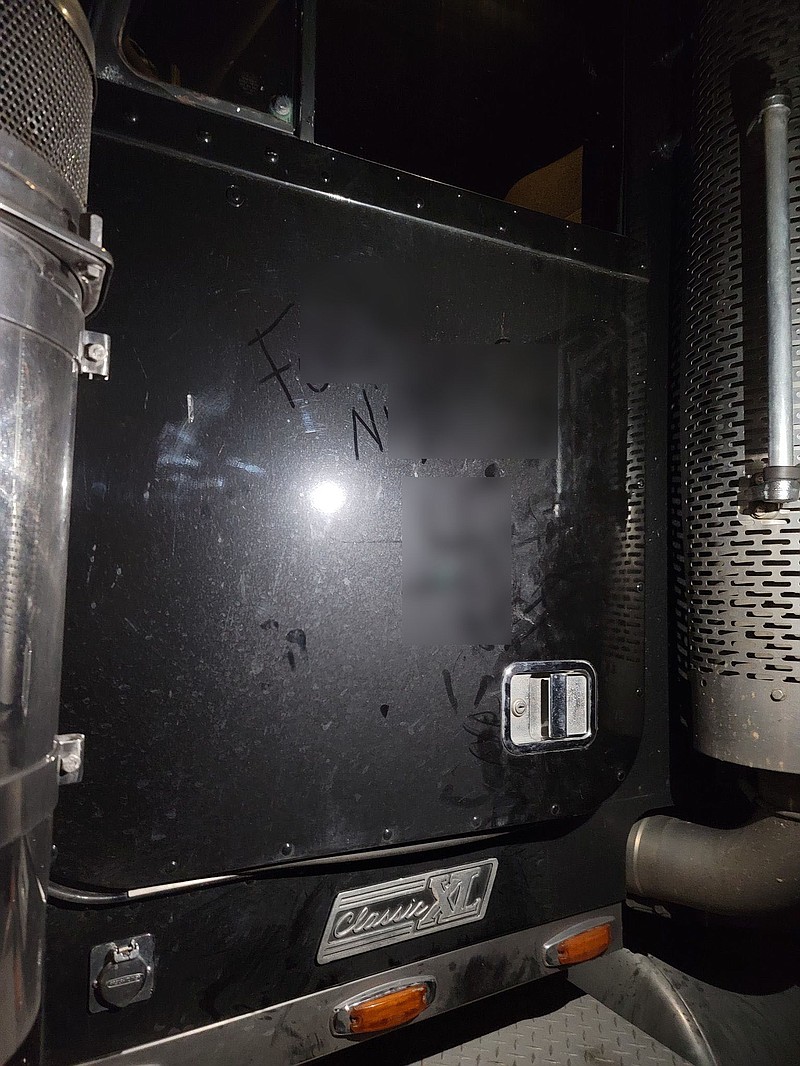 The phrase “f*** n******” and a swastika were drawn on the side of Biddle and Sons Trucking LLC vehicles in a vandalism incident last week. The air intake systems were damaged on two trucks, and an investigation into the incident is ongoing. (Submitted photo)

Around 5 a.m. on June 3, Todd and Phelecia Biddle received a call from two employees of their family-owned company, Biddle and Sons Trucking LLC, stating that their trucks were not building up air and that vulgar messages were written in the dust on the doors.

The couple quickly made their way from Stamps to where the vehicles were parked in Magnolia, calling the police after discovering holes punctured into the air tanks underneath the truck. On the doors, a racial slur, another swear word and a swastika were drawn in the dust. The message on one truck read “f* n.”

“We’ve never had any type of racial backlash or anyone being derogatory or negative towards us for being a Black-owned company,” said Phelecia Biddle.

She said that their company has been in business since 2018, and this was the first incident of vandalism they have seen against them. The company is based out of Stamps, but some of the company’s drivers live in Magnolia and park their trucks in an empty parking lot on Vine Street, where the incident occurred.

“I believe they (the vandal) were waiting for those vehicles to be parked. I believe that it was a truck driver because you would have to be a truck driver to know where those airbags are,” said Phelecia Biddle. “I don’t believe it was a former employee and I honestly don’t believe it was a Caucasian who did it. It may have been an African-American who did it and wrote those messages to throw us off.”

Phelecia Biddle said that despite there being racist messages written on the trucks, she did not feel as though it was a racist situation. Racist motivations or not, the Biddles still had to repair the vehicles and paid out of pocket to replace the damaged parts. Although an insurance claim could be made, Phelicia Biddle said that they wanted to make sure they could get the vehicles road-ready for their drivers as soon as possible.

“Thank God we are fortunate enough to pay for the damage out of pocket,” said Phelicia Biddle. “We have really worked hard over the last few years to get where we are. I would really like the community’s help in finding out who did this. I don’t believe it is a race issue and I don’t want it to blow up into a race issue. I believe it was a targeted attack by someone that is just ignorant.”

The Biddles are offering a $1,000 reward for any information that can lead to an arrest regarding the vandalism to their company trucks. All tips received would remain anonymous.