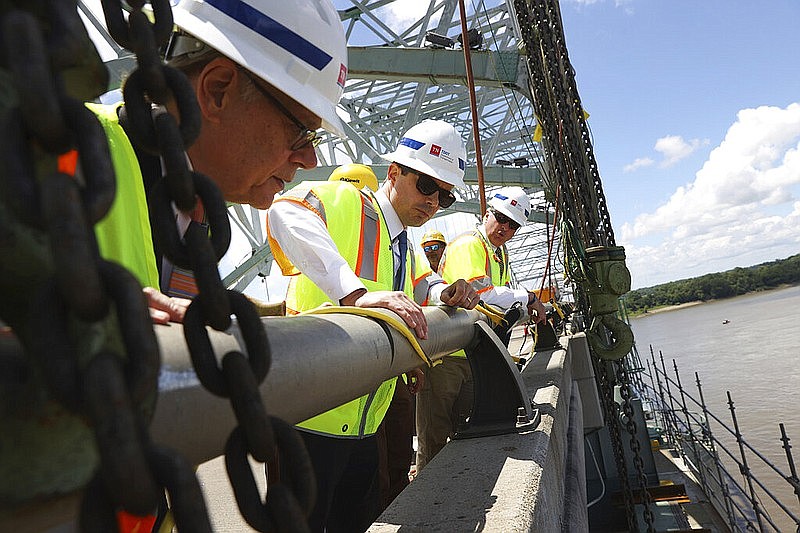 Transportation Secretary Pete Buttigieg (center) gets a look at the cracked beam on the Hernando De Soto Bridge on Thursday with U.S. Rep. Steve Cohen, D-Tenn., (left) and other officials. The span over the Mississippi River on Interstate 40 between West Memphis and Memphis has been closed since May 11. (AP/The Commercial Appeal/Joe Rondone)

MEMPHIS — Repairs on a steel support beam on the Interstate 40 bridge over the Mississippi River are expected to take through at least July, transportation officials said Thursday as U.S. Transportation Secretary Pete Buttigieg met with regional officials.

The six-lane, 19,535-foot Hernando de Soto Bridge connecting Arkansas and Tennessee has been closed since May 11, when an inspection revealed a crack in the beam. The bridge will not reopen until the two-phase repair process is complete.

Buttigieg, in a visit to Memphis, urged congressional action on a national infrastructure spending plan — a priority of President Joe Biden’s administration. He and officials from both states also discussed lessons that should be gleaned from the I-40 bridge’s deterioration, which went undetected during consecutive annual inspections.

“We’ve been coasting on infrastructure decisions we made decades ago, and it’s long past time for us to do our part,” Buttigieg said.

The Tennessee Department of Transportation is in charge of repairs to the span that connects Memphis and West Memphis, but it hasn’t announced an official timeline for reopening. Tennessee Transportation Commissioner Clay Bright said Thursday that the repair contractor, Kiewit Infrastructure Group of Omaha, Neb., has ordered the materials to fix the beam.

“We’re expecting delivery of those materials in late June,” Bright said. “That’s where it is in the process. Prep work will start probably this week, making sure we’ve prepped the existing beam for those materials that are coming in, so we’ll be ready for it once it hits the job.”

Kiewit personnel completed Phase 1 repairs May 25. The goal of Phase 1 was to stabilize the bridge to make it safe for workers to conduct permanent repairs. Workers attached two fabricated steel plates weighing 9 tons to each side of the fractured beam.

The second phase will involve removing and replacing the damaged piece. Bright said the materials are going to be specially made by two metal fabrication plants, and both plants consider this their top priority until they are finished.

Installation of the materials should take through July and maybe into August, Bright said. He did not have any additional information about a repair schedule.

After repairs are complete, Tennessee’ engineers will inspect the bridge in detail, focusing on welds similar to the one at the location of the fracture.

Bright said he has been asked what would build the public’s confidence in the bridge enough that they feel comfortable crossing it when it reopens.

“We’re taking this investigation and inspection to another level, looking at all the welds and whatnot, and we’re hoping that conveys to the public how serious it is that their perceptions of that bridge [are comfortable],” Bright said. “Once they get back on it, it’s going to be safe for them.”

The group agreed that funding for maintenance and repairs for the nation’s aging infrastructure system should be a priority for the federal government going forward.

“As long as there’s sustainable funding so that the state transportation agencies can have their own long-term plans, then I think you’ll see the diversification of multimodal transportation, you’ll see alternative fuel sources developed naturally and organically [such as] electric vehicle charging networks, and information infrastructure, the federal ability to communicate centralized information,” said Jason Higginbotham, assistant chief financial officer for Ozark Motor Lines.

Arkansas ranks first in the nation in per capita transportation and logistics employment, Arkansas Trucking Association President Shannon Newton said. Longer travel routes have cost the trucking industry in Arkansas $2.4 million per day since the I-40 bridge closed, she said.

“Geographically, we rely on the [I-40] bridge to connect us to the eastern part of the U.S.,” she said. “It’s disproportionately impacting the companies and businesses in Arkansas that rely on this sort of transportation and commerce.”

I-40 is one of the country’s most vital logistic and defense corridors, carrying much of the United States’ east-west trucking traffic. More than 41,000 vehicles crossed the bridge in Memphis every day before it closed, and about 29% were trucks, according to the Arkansas Department of Transportation’s latest available data from 2019.

Most traffic has been rerouted south to the Interstate 55 bridge between West Memphis and Memphis. Average peak travel times recorded last week were 65 minutes to 55 minutes to cross from Arkansas to Tennessee in the mornings. A trip over the crossing took about 40 minutes Thursday morning.

The I-55 bridge is more than 70 years old, two decades older than the I-40 bridge, but multiple inspections have found it to be in sound shape and able to handle all of the extra traffic, Bright said at the Thursday news conference. Before the I-40 bridge closed, the I-55 bridge handled an estimated 46,000 vehicles a day, 35% of which were trucks, according to the Transportation Department’s 2019 data.

Newton and Donna England, president of the Tennessee Trucking Association, said drivers must decide at least 100 miles in advance whether to deal with congested traffic on the I-55 bridge or use longer routes and mileage to avoid it. Outside the Memphis area, the nearest bridges across the Mississippi River are U.S. 49 through Helena-West Helena — about 75 miles south — and Interstate 155 through Caruthersville, Mo. — about a 90-mile drive north.

Those two bridges have seen increased traffic in recent weeks, but not enough to cause delays, Newton said. However, the state and county roads that trucks have to take on their alternate routes were not built to carry commercial traffic, and some small businesses have taken financial hits because of the interruption of interstate commerce, she said.

“Whether it be a global pandemic or an infrastructure crisis, we’re going to be continuing to deliver freight,” Newton said. “We’re going to find a way to get there, but that process right now is just a little bit messy.”

Buttigieg was asked twice whether there should be a third bridge between Memphis and West Memphis. He said that decision is up to Arkansas and Tennessee officials, while the federal government’s main role is to provide “resources to look after what we have and expand what needs to be expanded.”

Debate over constructing a third bridge over the Mississippi River had largely died down in recent years until last month’s closure of the Hernando de Soto Bridge.

The group of U.S. officials visited the bridge and observed the current status of the repair process Thursday afternoon. Buttigieg said he spoke to the Kiewit workers and to “people and companies from small, family-owned trucking businesses all the way to FedEx” about how the bridge closure has affected them.

“We’ve heard through the mayor about trucks being rerouted onto residential streets in West Memphis because their navigation apps sent them there,” Buttigieg said. “We’ve heard about people in the hospitality industry seeing their hours cut, after everything they’ve been through with covid-19, because of the impact on customers. We’ve heard from truckers who have pointed to losses in the millions every day from the delays and the reroutes.”

The sudden changes in traffic throughout West Memphis has “paralyzed” the city, Mayor Marco McClendon said at the news conference, but Buttigieg’s visit left him feeling “encouraged” that the situation can be corrected in the near future.

Arkansas Highway Commission Chairman Robert Moore said he too felt optimistic that the federal government will prioritize aging infrastructure from now on.

“I think [Buttigieg’s] presence here signifies that we’re on a path to taking care of a major problem in this country that affects everybody, and I think we’ll find broad support across the board from the political spectrum when it comes to repairing infrastructure,” Moore said. “I think it’s a good barometer of the way the wind’s blowing.”