SAU’s season came to an end in Central Region Tournament 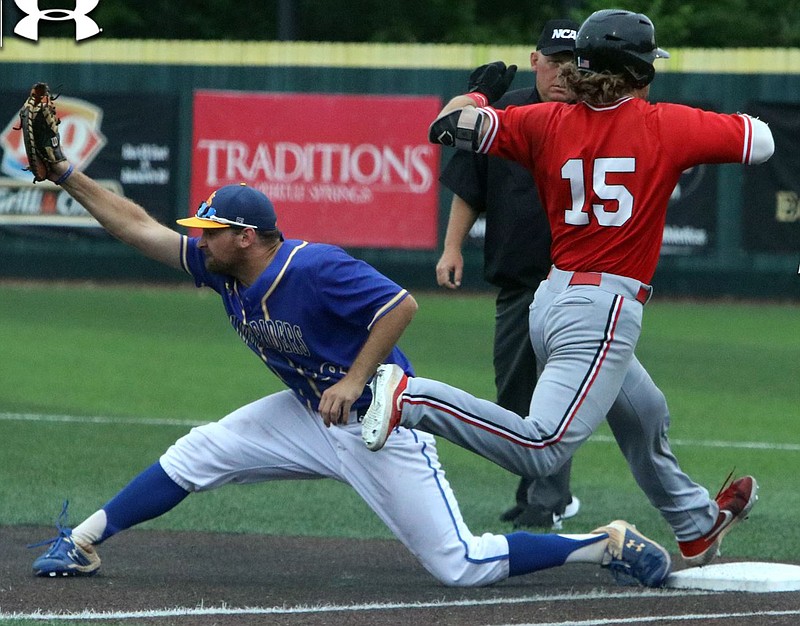 An official watches the play closely at first as SAU’s Mason Peterson catches the ball against Central Missouri, who defeated the Muleriders 12-5 in the NCAA Division II Central Region Tournament championship round on Monday. (SAU Sports Information)

WARRENSBURG, Mo. – No one said it would be easy. But that certainly did not phase fifth-year head coach Justin Pettigrew’s squad on Championship Monday from Crane Stadium at Tompkins Field.

Southern Arkansas (29-15) entered the final day of the NCAA Division II Central Region Tournament needing two wins over top-seeded and host Central Missouri, a consensus top five team nationally, in order to punch its ticket to the DII Baseball World Series. Through the first five innings of play, the Muleriders battled blow-for-blow with the Central Missouri Mules, before a late offensive surge by UCM resulted in a 12-5 win.

The Muleriders opened the tournament with an 8-6 victory over Augustana, followed by a 2-1 win over Minnesota State-Mankato. They batted Central Missouri for the first time in the winner’s bracket, falling 4-2.

SAU bounced back to eliminate Minnesota State-Mankato before losing to Central Missouri 12-5.

Monday’s matchup marked the fourth time in SAU’s NCAA era that the Muleriders advanced to the final day of a regional postseason tournament. They first reached the final day in 2004 at the South Region Tournament, again at the 2010 South Regional, and at the 2018 Central Regional.

In their first game against Minnesota-State-Mankato, senior Zach Muldoon sent a 2-2 pitch sharply on the ground to third base and the throw home to cut down the winning run in senior Austin Baker was not in time as SAU walked off Minnesota State-Mankato 2-1. The win was also highlighted by an outstanding effort from SAU starting pitcher Zach Smith.