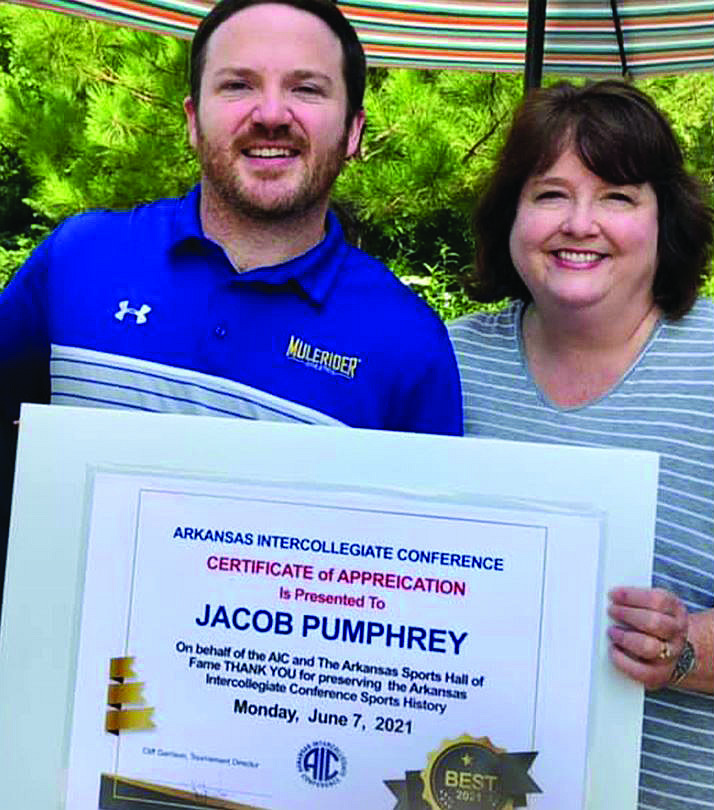 Earlier this summer, Mulerider Athletics’ Director of Athletic Communications Jacob Pumphrey was recognized by former members of the Arkansas Intercollegiate Conference (AIC) for his work in preserving old AIC records, as well as his work in digitizing said records for the Arkansas Sports Hall of Fame (ASHOF).

“We are proud of Jacob for all that he does for Mulerider Athletics,” said Director of Athletics Steve Browning. “We are also proud of him for his commitment to promoting and preserving the legacy of collegiate athletics in the state of Arkansas.”

Pumphrey, a native of Junction City, Arkansas, has been a part of the Mulerider family dating back to his time as a student at Southern Arkansas, beginning in 2009. He has served in his current role as director of athletic communications for the past three years.

Pumphrey’s love and passion for Arkansas sports is something he learned from his dad Wayne, with whom he currently broadcasts Junction City football games with.

The AIC, which had 15 member institutions, all from the state of Arkansas, was created in the late 1920s and continued competition until it was dissolved in 1995.

In their time in the AIC, the Muleriders claimed five titles in football, six in men’s basketball and 17 in baseball.