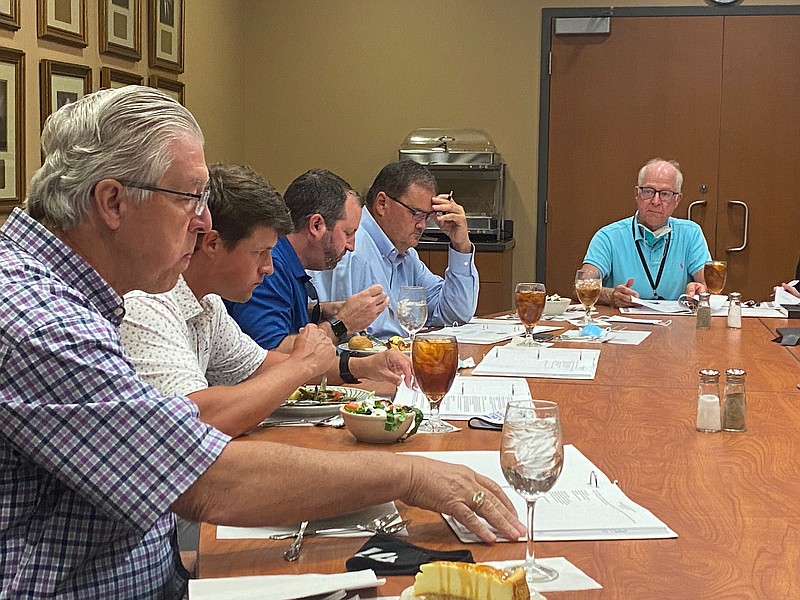 Becky Bell/Special to the Banner-News Dr. John Alexander, chairman of the Magnolia Regional Medical Center Board, conducts the Monday meeting as discussions are held about more COVID-19 cases coming through the emergency room.

The Magnolia Regional Medical Center has been seeing an increase in COVID-19 patients again compared to previous months.

“We have seen an uptick in the emergency room visits and we have to adjust,” Chief Operations Officer Lee Ann Sheer said during Monday’s board of directors meeting. “It went from radio silent to on the radar again.”

The hospital has already spent $6.5 million on COVID-19 and had until June 30 to report costs to those who provided the money, which came from multiple sources, including the federal government, said Chief Financial Officer Roxanne Stewart. However, there could be a possibility this date could be extended.

Dr. John Alexander, chairman of the board, said there were 15,000 more people in Arkansas that got vaccinations in July compared to June.

“There has been a slight uptick in people going out and getting vaccinated and we would like to do everything we can do to get that number up,” Alexander said.

However, he said sometimes his patients he sees say they have been vaccinated but they have not.

“The people have been reporting they have been vaccinated and then they are tested, and we find out they weren’t,” Alexander said. “The hospital staff is at risk.”

Previously nationwide, the average age of someone coming down with COVID-19 was 61, but now it is closer to 50 nationally, he said.

“What it is, maybe, is older people tend to get vaccinated more than young people,” board member Jonathan Smith said.

In other business, Alexander announced there would soon be an open house for the hospital’s new multifunctional clinic located at 1005 N. Jackson Street which was previously the Life Smart building. The clinic has 12 patient rooms and a couple of procedure rooms and plenty of room for growth for the hospital, he said.

Dr. Kevin Rudder, a fairly new orthopedic surgeon to the MRMC staff, has performed 54 “robotic knee surgeries” since he has been there.

There are many nursing positions available at the hospital primarily in orthopedics, he said.

In another matter, Alexander explained to the board that UAMS residents would no longer be available to cover night coverage at the hospital at all times. He said that beginning Monday night, the emergency physicians would take care of this duty at the hospital.

Also, during the meeting, Alexander said the hospital has secured a urologist who would come to Magnolia once a month to see patients.

“This is one other thing we thought was lacking in the community,” he said.

In June the board did not have a meeting. Chief Financial Officer Rex Young did not attend the Monday’s July meeting as he was on vacation. Monday’s meeting did include an executive session about the First-Quarter Quality Report.

The next meeting of the board will be at noon on Aug. 23 in the boardroom at the hospital.