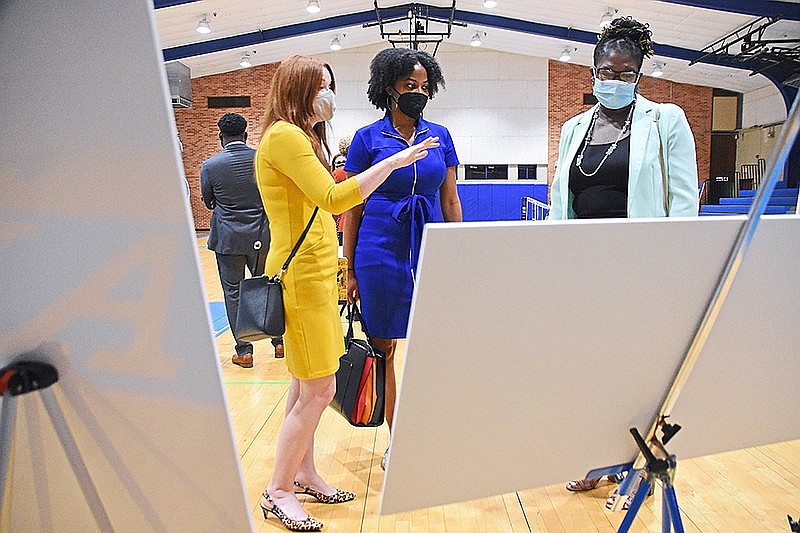 Three of them — Elliott, Bingham and Jessica Scott — joined the mayor and other officials in the Dunbar Community Center gymnasium for a news conference Thursday to discuss the sales-tax package.

On Thursday, she noted the early childhood education provisions in the mayor’s plan.

“I don’t know how you say you care about the future without investing in children,” Elliott said. “And we keep hoping, I think, that maybe somebody is going to look at Little Rock and say, ‘I want to invest in Little Rock’ so we don’t have to. But, folks, it’s on us.”

Jessica Scott, a faculty member of the University of Arkansas at Little Rock’s anthropology department, said investments in parks “will serve as an economic driver for the city of Little Rock.”

She added, “I think we’ve all learned in the last year that getting outside with our families is more important than ever.”

She said Thursday that as a longtime resident of southwest Little Rock in Ward 2, the community will see improvements related to streets, drainage surrounding homes and businesses, and new affordable housing, should residents approve the tax increase.

Kelley is the chief executive of the real estate company Kelley Commercial Partners. Causey is an attorney and founder of the Causey Law Firm.

Two members of the Little Rock Board of Directors, Capi Peck of Ward 4 and at-large director Antwan Phillips, also addressed attendees in the gymnasium.

If voters give approval in September, the 1 percentage-point sales-tax increase would take the overall local rate in Little Rock to 9.625% beginning in January.

The increase would sunset at the end of 2031, though Scott’s original proposal had it lasting in perpetuity.

Officials estimate that the tax will generate $530 million in new revenue over 10 years. That money is intended to fund improvements to parks, the acquisition of new city vehicles, construction of an indoor sports complex, repairs to roads and new exhibits at the Little Rock Zoo.

Scott told attendees Thursday that the sunset clause “focuses on accountability with a citizen-led accountability commission that will ensure that everything that we voted on is not only allocated, but funded, and projects are realized for the community to see.”