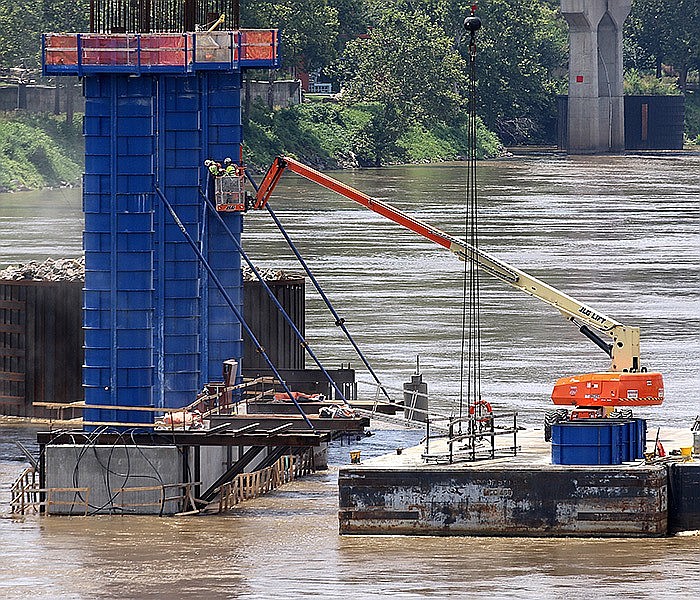 Construction crews work Thursday on one of the new bridge pylons on the Arkansas River for the 30 Crossing project in Little Rock. (Arkansas Democrat-Gazette/Thomas Metthe)

Three ramps on a major Interstate 30 interchange serving downtown Little Rock will close for good later this month as part of the latest work on the nearly $1 billion 30 Crossing project, according to the Arkansas Department of Transportation

The ramp closings at the I-30/Cantrell Road interchange are taking place as the contractor for the project to improve the 6.7-mile corridor through downtown Little Rock and North Little Rock will close a section of I-30 throughout the weekend starting tonight and require detours.

The closing of the I-30/Cantrell Road interchange ramps occurs after weeks of intermittent lane closings throughout the corridor, extending to downtown streets on both sides of the Arkansas River and keeping drivers and pedestrians alike on their toes.

This closing is permanent and involves a major artery into and out of the downtown core. Up to 12,000 vehicles per day use just one of the ramps.

“While we have certainly seen changes in traffic patterns downtown as a result of the 30 Crossing project, this marks the most significant closures to date,” said Gabe Holmstrom, executive director of the Downtown Little Rock Partnership.

Closing and removing the ramps are part of the “construction plan to demolish the interchange and reconstruct the I-30 bridge and associated ramps,” the department said in a news release.

Once the ramps are closed, the agency said the exit ramp for East Sixth and East Ninth streets will be the only way for eastbound I-30 traffic to enter downtown Little Rock to access places such as the River Market, East Village and MacArthur Park.

“The next exit drivers can take will be to Broadway Street in North Little Rock,” the news release said.

Beginning Tuesday, the following ramps at the interchange will be closed, according to the department:

• Cumberland Street on-ramp to I-30 eastbound.

Holmstrom said the change in traffic patterns may give drivers a new perspective on downtown.

“Drivers coming into or leaving downtown will now have the opportunity to discover new routes and hopefully notice places and buildings they might not have seen with their past driving patterns,” he said.

Another possible impact to closing the interchange ramps will occur during demolition, with the agency noting “local communities may experience impacts from work lights and noise, including during overnight hours.”

A new interchange will be built south of the Cantrell interchange that will funnel traffic to and from downtown via Fourth, Sixth and Ninth streets and Capitol Avenue.

Removal of the Cantrell interchange will create a nearly 18-acre public space that has been envisioned as a “Central Park”-like area. The city would have to shoulder the costs of turning the space into a park.

The 30 Crossing project will widen the I-30 downtown corridor between Interstate 530 in Little Rock and Interstate 40 in North Little Rock from six lanes to 10.

The work includes replacing the I-30 bridge over the Arkansas River as well as work on a section of I-40 in North Rock. Replacing the bridge, the primary piece in the first phase of 30 Crossing, began late last year.

The department proposes spending $417 million in federal and state transportation money on the 30 Crossing project over the next four years, according to planning documents for Central Arkansas.

None of the money identified in the documents will come from the statewide 0.5% sales tax that voters approved in Amendment 91 to the state constitution in 2012.

The Arkansas Supreme Court ruled Oct. 29 that the department couldn’t spend Amendment 91 funds on roads that have more than four lanes, which include the section of I-30 encompassing 30 Crossing.

While the total cost of the 30 Crossing work approaches $1 billion, the department has identified only enough money to pay for the $638 million that it said the first phase would cost.

Meanwhile closing down a section of I-30 between East Sixth Street and Interstate 630 and detours is scheduled to begin at 10 p.m. today and last through 5 a.m. Monday to allow the contractor to remove the East Ninth Street overpass and eventually replace it. Traffic will be detoured on the frontage roads.