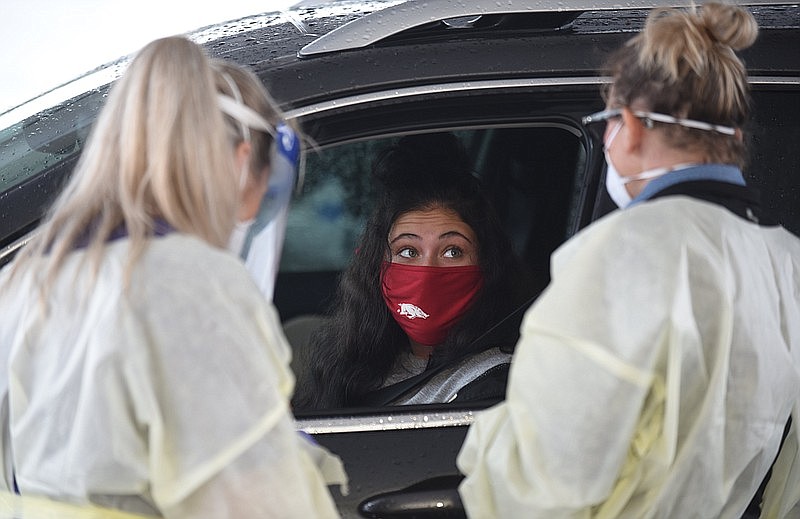 Karson Freeman of Little Rock prepares to undergo coronavirus testing at a drive-thru clinic across from Baum-Walker Stadium on the outskirts of the University of Arkansas, Fayetteville campus in this Sept. 1, 2020, file photo. (NWA Democrat-Gazette/David Gottschalk)

Arkansas’ count of coronavirus cases rose Wednesday by exactly 1,000 — the largest single-day increase since February — while the number of people hospitalized in the state with covid-19 rose by double digits for the second day in a row.

After rising by 55 on Tuesday, the number of coronavirus patients in Arkansas hospitals rose Wednesday by 16, to 432, its highest level since March 1.

Already at its highest level since March 5, the number of covid-19 patients who were on ventilators rose by four, to 80.

The state’s death toll from the virus, as tracked by the Department of Health, rose by seven, to 5,933.

“Today’s report shows the highest number of new cases in months, and hospitalizations continue to increase,” Gov. Asa Hutchinson said in a tweet.

He referred to the statewide tour he plans to begin today to talk with residents about coronavirus vaccines.

“I’m looking forward to the first Community COVID Conversation tomorrow at 6pm in Cabot with more communities in the coming weeks,” Hutchinson said.

Excluding Feb. 28, when 2,932 cases were added to Arkansas’ tallies as part of a “data cleanup,” Wednesday’s increase in cases was the largest in a single day since Feb. 11.

The average daily increase in the state’s case count over a rolling seven-day period rose to 530, its highest level since the week ending March 1.

With new cases outpacing recoveries, the number of cases in the state that were considered active rose by 547, to 5,192, its highest level since Feb. 21.

It was the first time since then that the number had topped 5,000.

The number of virus patients who were in intensive care units remained for a second day at 176, its highest level since Feb. 28.

“I don’t know how high it’s going to get, but this is something that the epidemiologists predicted last week, that we’d be seeing more days like this going into the future.”

He said the escalation in the state’s daily case increases is “being driven largely by the delta variant” that first emerged in India.

Infections that occurred during gatherings over the Fourth of July weekend are expected to further accelerate the spread.

Since people typically don’t develop symptoms until about five days after they’re infected, Romero said he expects those cases to begin showing up in the state’s tallies early next week.

“It has the potential to be significantly higher than what we’re seeing today,” Romero said.

Also on Wednesday, Mercy health system, which has hospitals in Rogers, Fort Smith and Berryville, announced that it will require its workers to be vaccinated by Sept. 30.

It said it has seen an uptick in hospitalizations in Rogers and Fort Smith, with the majority of those occurring among people who are not vaccinated.

“What we are seeing aligns with the Associated Press analysis of [U.S. Centers for Disease Control and Prevention] data,” Dr. John Mohart, Mercy’s senior vice president of clinical services, said in a news release.

“More than 95% of recent hospitalizations across the U.S. are people who aren’t vaccinated. The data is clear. Vaccination is key to saving lives.”

Spokeswoman Mardi Taylor said 75% of the employees are vaccinated.

In Fayetteville, Washington Regional medical system President and CEO Larry Shackelford said he anticipates the system will pursue a vaccine requirement in the near future.

About 80% of the system’s employees have been vaccinated, spokeswoman Natalie Hardin said.

Shackelford said the system has been carefully weighing the merits of mandating covid vaccinations for its workforce for several months.

“This is clearly the trend within the hospital industry nationally, and that trend is supported by guidance of federal employment and public health authorities,” he said.

“We have closely monitored the overwhelming efficacy and safety of the covid-19 vaccinations over the past seven months and are not unmindful of the less-than-ideal trends within our community as the delta variant of the covid-19 virus takes hold. Our No. 1 priority is the safety of our patients, their families and our staff.”

Little Rock-based Baptist Health doesn’t have a vaccination mandate for its employees but hasn’t ruled out imposing one in the future, spokeswoman Cara Wade said in an email.

“We continue to strongly encourage our staff members to get the vaccine and we continue to slowly see this number increase,” Wade said.

The University of Arkansas for Medical Sciences also doesn’t have a vaccine requirement “but could possibly in the future,” spokeswoman Leslie Taylor said in an email.

She said about 85% of the university’s more than 10,300 employees are vaccinated.

In Jonesboro, St. Bernards Medical Healthcare spokesman Mitchell Nail said in an email that the system is “not discussing” requiring vaccinations, “especially as our percentage of vaccinated employees continues trending upward.”

He said the system, which includes hospitals in Jonesboro, Pocahontas and Wynne, is “nearing the 70-percent mark” for the percentage of its 3,900 employees who are vaccinated.

Statewide, Romero said, about “50% at best” of all health care workers are immunized.

Among all Arkansas adults, 53.2% had received at least one vaccine dose, and 43.6% were fully vaccinated as of Wednesday, according to the CDC.

The virus poses risks “both in the hospital and outside of the hospital” to those workers, he said.

While infections among workers could create manpower shortages, Romero said, filling positions isn’t as difficult as it was during the winter, when the number of patients was higher and more states were competing for workers.

Although the number of hospitalized covid-19 patients in Arkansas has more than doubled in just three weeks, it remains below the peak of more than 1,300 it reached in early January.

Romero said the hospitals have adequate supplies of ventilators and personal protective equipment and that nothing “out of the ordinary” was being done to ensure they had the capacity to care for covid-19 patients.

“We’re below those levels that were of concern” during the winter, he said.

According to the CDC, the 3,396 cases reported in Arkansas during the week ending Tuesday was the seventh-highest number among the states and District of Columbia, even without adjusting for population.

In deaths reported during the week, Arkansas was roughly tied with Florida, Louisiana and Wyoming for the fifth-highest rate, 0.7 per 100,000 residents, behind West Virginia, Arizona, Missouri and Nevada.

Over the past seven days, Romero said, 12.1% of the Arkansas’ polymerase chain reaction, or PCR, tests and antigen tests for the virus were positive, up from 11.6% as of a day earlier.

Hutchinson has said he wants to keep the percentage below 10%.

Romero said there’s no “individual benchmark” that would cause him to recommend additional measures to curb the virus’s spread.

“We’re talking to the governor daily,” Romero said. “We’re talking to him about these hospitalization rates and number of new cases and positivity and deaths, so we’ll make those recommendations as they go forward.”

In the meantime, he said, individuals have the responsibility to take steps such as getting vaccinated and wearing masks in public if they aren’t yet vaccinated.

“I don’t see people following that guideline,” Romero said. “I see most people not wearing a mask.”

He added that parents should get their children who are old enough vaccinated now, if they haven’t already, in preparation for the next school year.

Currently, the vaccine developed by Pfizer and BioNTech is authorized for children 12 and older.

The other two vaccines, from Moderna and Johnson & Johnson, are allowed for people 18 and older.

“There’ll certainly be vaccination clinics at the schools, but once you’re all together, your risk is greater, so get the kids vaccinated at this point,” Romero said.

According to a federal report, 19.1% of Arkansas children age 12-17 had at least one vaccine dose as of Monday, and 13.2% were fully vaccinated.

Among the states and District of Columbia, Arkansas ranked 45th in its percentage of children in that age group who had received at least one vaccine dose and 46th in the percentage who were fully vaccinated.

According to CDC data updated Wednesday, Arkansas also ranked low in its vaccinations of residents of all ages.

Nationally, 55.1% of people had received at least one vaccine dose, and 47.6% were fully vaccinated.

The number of vaccine doses that Arkansas providers reported having administered, including second doses of the Pfizer and Moderna vaccines, rose Wednesday by 5,289, according to Health Department figures.

That was down by more than 5,000 from the number reported a week earlier, when the state posted its largest single-day increase in doses administered in several weeks.

Reflecting a slowdown in vaccinations over the Fourth of July weekend, the average number of doses administered each day over a rolling seven-day period fell to just under 4,000 as of Wednesday, the lowest level since the Health Department began releasing daily vaccination numbers in January.

Meanwhile, Scott Hardin, a spokesman for the state Department of Finance and Administration, said the number of people who had cashed in winning scratch-off lottery tickets handed out as rewards for getting a shot increased by 232, to 848, from June 28 to Tuesday.

The largest amount someone has won from one of the tickets so far is $500. Twelve people had won that amount as of Tuesday, up from nine as of June 28.

Two tickets each worth $1 million remained in circulation in the game, known as the $1 Million Spectacular, Hardin said.

Hutchinson announced in late May that Arkansans who received a vaccine dose May 26 or after would be eligible for one of the tickets or a pair of gift certificates for hunting and fishing licenses worth a total of $21.

He said the state was buying 50,000 lottery tickets and 50,000 pairs of gift certificates and could buy more if the incentives proved effective.

People can claim the rewards at vaccination clinics organized by the Health Department or the Arkansas Foundation for Medical Care or by taking their vaccination cards to one of the department’s local health units.

Pulaski County had the most new cases on Wednesday, 146, followed by Faulkner and Garland counties, which each had 75. Saline County had the next-highest number, 71.

The Health Department on Friday stopped reporting separate totals for cases that were confirmed through PCR tests and “probable” cases, which include those identified through less-sensitive antigen tests.

“It’s the same — a PCR or an antigen — it’s a case, and it makes no difference really in how you react to them or how you investigate them, so we just thought it was OK just to lump everything together,” Romero said.

Romero said all the deaths reported Wednesday happened within the past month.

Among nursing home and assisted living facility residents, the state’s count of virus deaths rose by one, to 2,093.

The number who have ever been on a ventilator rose by two, to 1,737.