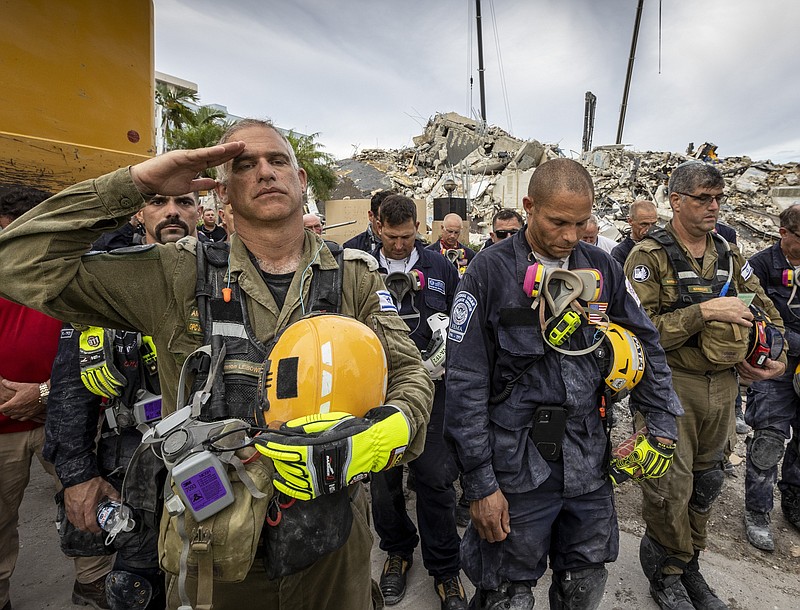 A member of the Israeli search and rescue team, left, salutes in front of the rubble that once was Champlain Towers South during a prayer ceremony, Wednesday, July 7, 2021, in Surfside, Fla. Members of search and rescue teams and Miami-Dade Fire rescue, along with police and workers who have been working at the site of the collapse gathered for a moment of prayer and silence next to the collapsed tower. (Jose A Iglesias/Miami Herald via AP)

SURFSIDE, Fla. — Rescue workers now focused on finding remains instead of survivors in the rubble of a Florida condominium collapse paused briefly atop the pile Thursday to mark the two-week anniversary of the disaster but said they had no plans to pull back during the recovery effort.

The death toll rose to 60, with another 80 people unaccounted for, Miami Dade Mayor Daniella Levine Cava said at a news conference Thursday. Detectives are still working to verify that each of those listed as missing was actually in the building when it collapsed. Meanwhile, rescue workers who have been at the site for two weeks are dedicated to the task of recovering as many victims as possible, Levine Cava said.

“The work continues with all speed and urgency,” she said. “We are working around the clock to recover victims and to bring closure to the families as fast as we possibly can.”

The painstaking search for survivors shifted to a recovery effort at midnight Wednesday after authorities said they had come to the agonizing conclusion that there was “no chance of life” in the rubble of the Champlain Towers South condo building in Surfside.

“When that happened, it took a little piece of the hearts of this community,” said U.S. Rep. Debbie Wasserman Schultz, whose congressional district includes the town of Surfside where the Champlain Towers South is located.

Michael Stratton, whose wife, Cassie, has not officially been confirmed dead, said friends and family had accepted “the loss of a bright and kind soul with an adventurous spirit.” He was talking on the phone with his wife right when the building collapsed, and she described that it was shaking before the phone went dead, he has told Denver’s KDVR-TV.

“This wasn’t the miracle we prayed for, but it was not for lack of trying by rescue crews whose tireless bravery will never be forgotten,” he said in a statement Thursday.

Wasserman Schultz and Florida Gov. Ron DeSantis pledged financial assistance to families of the victims, as well as to residents of the building who survived but lost all their possessions, while acknowledging the devastating toll the tragedy has taken on them over the past two weeks.

“Is there hope? Will we be able to have a miracle? I know it’s weighed a lot on the families,” DeSantis said.

In addition to property tax relief for residents of the building, DeSantis said the state government will work toward channeling an outpouring of charitable donations to families affected by the collapse. Levine Cava said crews were also collecting and cataloguing a long list of personal items, including legal documents, photo albums, jewelry, wallets, and electronic goods that they would seek to reunite families with.

The change from search and rescue to recovery was somber. Hours before the transition Wednesday, rescue workers stood at solemn attention, and clergy members hugged a line of local officials while many of them sobbed.

An accordion player unseen on a nearby tennis court played Aaron Copland’s “Fanfare for the Common Man,” which was followed by a piccolo playing “The Battle Hymn of the Republic.” Firefighters from Ohio, Pennsylvania, New Jersey, the federal government and elsewhere were also present.

On a tall nearby fence, families and well-wishers had posted photos of the victims, supportive messages and flowers. Firefighters hung a banner atop the fence that read “Miami-Dade Fire Rescue Mourns With You.”

Miami-Dade Assistant Fire Chief Raide Jadallah told weeping families during a private briefing on Wednesday that the rescuers’ “sole responsibility at this point is to bring closure.”

Later, during a news conference, Jadallah said crews remained committed to doing whatever it takes to finish the job.

Dennis Dirkmaat, an anthropology professor who chairs the Department of Applied and Forensic Sciences at Mercyhurst University, said he expects crews will use heavy equipment in a “top down approach” to methodically lift material off the debris pile, place it in containers and evaluate it for evidence of human remains. He said the process would likely be repeated as the crews move to subsequent floors.

“It’s still a process, slow, tedious process of removing all of this debris. And so it’s going to take a while,” he said.

Hope of finding survivors was briefly rekindled after workers demolished the remainder of the building, allowing rescuers access to new areas of debris.

Some voids where survivors could have been trapped did exist, mostly in the basement and the parking garage, but no one was found alive. Instead, teams recovered more than a dozen additional victims. Because the building fell in the early morning hours, many were found dead in their beds.

No one had been pulled out alive since the first hours after the 12-story building fell on June 24.

Twice during the search operation, rescuers had to suspend the mission because of the instability of the remaining part of the condominium building and the preparation for demolition.

Authorities are launching a grand jury investigation into the collapse and at least six lawsuits have been filed by Champlain Towers families.