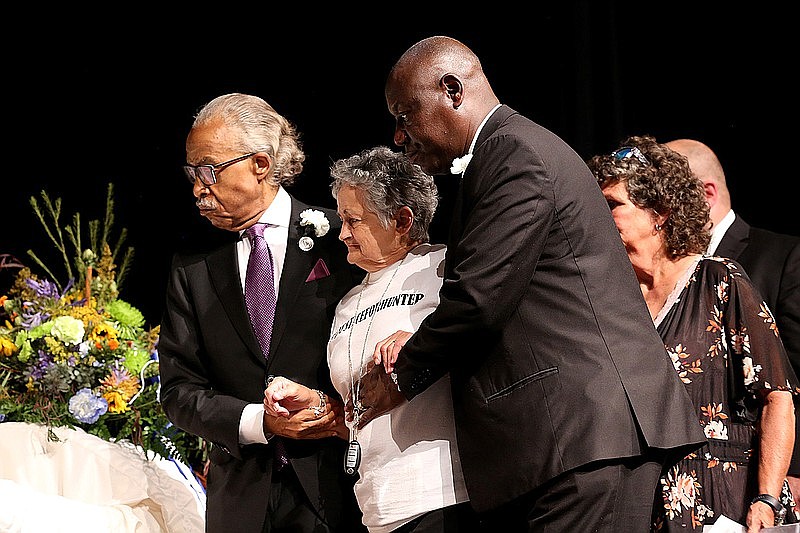 Rev. Al Sharpton (left) and attorney Benjamin Crump (right) escort Rebecca Payne to view her grandson’s casket during the funeral service for 17-year-old Hunter Brittain, on Tuesday, July 6, 2021, at the Beebe Schools Auditorium in Beebe. Brittain was shot by a Lonoke County Sheriff’s Deputy during a traffic stop on June 23. (Arkansas Democrat-Gazette/Thomas Metthe)

BEEBE — Rebecca Payne gripped the arms of the Rev. Al Sharpton and civil-rights attorney Ben Crump as she tearfully looked at the face of her 17-year-old grandson for the last time Tuesday at the Beebe High School auditorium.

Hunter Brittain’s funeral was a celebration of the teen’s life, which ended when Lonoke County sheriff’s deputy Sgt. Michael Davis shot him during a traffic stop June 23 near Cabot.

It was also a rally calling for interracial unification against police shootings.

“This is not about black and white; it’s about right and wrong,” Sharpton said at a news conference before the memorial service. “Hunter did nothing wrong. Just like we felt George Floyd did nothing wrong. … We all need to show America we will stand and grieve together and stand for justice together.”

Crump, along with another Floyd family attorney, Devon Jacob, is representing the Brittain family.

“Hunter should be preparing for his senior year in high school, but he’s dead in this casket,” Crump said, as he rested his hand on the casket adorned with flowers and white and blue ribbons with “Forever Chevy 17.”

Brittain was shot three times by Davis after he exited his truck to put a blue plastic bottle of antifreeze behind a wheel because the vehicle wouldn’t shift into park, according to witness accounts described in statements made by the family and their lawyers.

The Arkansas State Police, the investigating agency for the shooting, has released few details. Officials have said the investigation file could be passed to the prosecuting attorney by early next week. The prosecuting attorney has requested a special prosecutor to review the file. The special prosecutor will ultimately decide if the shooting will result in charges.

“All Hunter had in his hand was an antifreeze can, and maybe that’s the message he left us with. We need to break the frozen hearts that separate,” Sharpton said to thunderous applause from a mostly white audience of hundreds Tuesday. “We’ve been frozen in our race; we’ve been frozen in our own class. … I believe today Hunter is calling to us. It’s time for some antifreeze.”

“Let’s stand together and do what it takes to stop these tragedies from continuing,” he said.

Davis was fired last week for what Lonoke County Sheriff John Staley said was a breach of policy for failing to turn on his body camera before engaging Brittain. What body camera footage was captured has yet to be released to the public.

Jacob and others spoke about the need for national standards and transparency in policing and the need to pass the U.S. George Floyd Justice In Policing Act.

The legislation, which addresses a wide range of policies and issues regarding policing practices and law enforcement accountability, was passed by the U.S. House of Representatives in March. It has yet to be passed in the U.S. Senate. If enacted as is, it would lower the criminal-intent standard to convict law enforcement authorities, would limit qualified immunity as a defense and would grant administrative subpoena power to the U.S. Department of Justice.

At the funeral Tuesday, a wave of family and friends wearing “Justice for Hunter” shirts followed Payne across the stage where Brittain would have walked at graduation. Afterward, they filed out into their cars — many with stickers or paint bearing the same phrase — and headed to a rally at the sheriff’s office as they have done every evening since Brittain’s death.

Unlike on past nights, the sheriff’s office parking lot was blocked off, and deputies were joined by members of the Arkansas Patriots in anticipation of possible out-of-state activists who could risk “inflaming an already difficult situation,” as Staley put it on Monday.

The group was asked to be there by the Brittain family, and members describe themselves as “everyday, hardworking, dedicated Arkansas citizens who have taken an interest in the safety, security, and care of our local communities, cities, counties, and our great state as a whole,” according to their website.

However, everything remained peaceful as the crowd enjoyed pizza, watermelon and cake, listening to soft Christian rock music, as requested by the family.

Pastor Rick Lehr, a friend of the Brittain family, opened both the funeral and rally in prayer.

“Despite the struggles he had to endure, Hunter was a very respectful and passionate young man. … There was a longing to play a part in something bigger,” Lehr said. “He was placed in the ground, and it has brought so much sorrow and so much pain to so many people. But what about the purpose we have now? Look at what God is doing. Hunter’s death is going to play a part in changing the world.”

Family members and others have called for a “Hunter’s Law” in the state that would enhance police body camera requirements. Kwami Abdul-Bey, political action chairman for the Jacksonville NAACP, voiced his support for such a law at the rally Tuesday, saying the organization intends to help write and get a bill proposed in the next legislative session.

The NAACP shared a list with those in attendance of 44 unarmed Arkansans, including Brittain, who were killed by law enforcement authorities. Since 2015, approximately 80 unarmed people have been killed by police, according to the organization.

The other names have not gotten the national attention Brittain has received.

“All too often, here in Arkansas, we’re quiet when stuff like this happens,” Abdul-Bey said. “I hope that this is the catalyst to give us all voice.”

After the funeral, Jesse Brittain revved the engine of his nephew’s now-repaired white Chevrolet pickup with the casket in the bed, taking Hunter on his last ride.