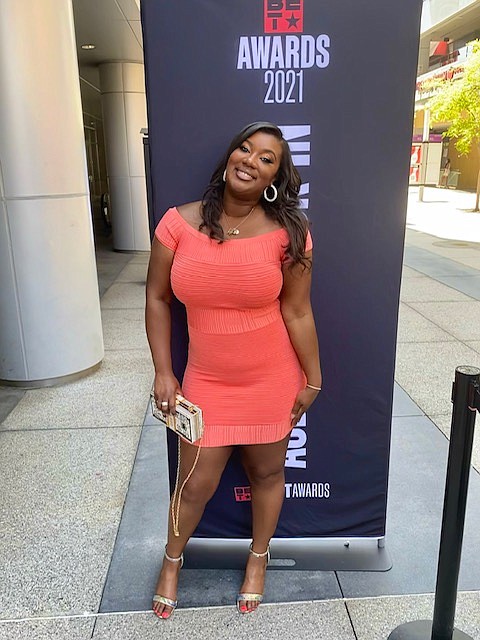 The local singer-songwriter and celebrity producer who grew up in Magnolia was recently selected to join the Recording Academy Class of 2021 as a voting member.

As a member of music’s most prestigious organization, she will have the privilege of helping to shape the music industry, future of music and its role in society. These individuals nominate and decide who wins Grammy Awards each year.

“It’s hard to beat becoming a Recording Academy member. I plan on winning a Grammy or two one day. I also want to start a school of music and turn my music production company (Raediyance, LLC since 2016) into a big record company that’s founded on love, honesty, and positivity … so artists can have long, healthy, happy music careers,” mentioned Watkins.

Shining Rae first got a glimpse of the big news when she woke up around 6 a.m. on June 28 and and checked Instagram.

“I saw the Grammy Academy announcement congratulating the Class of 2021. So I check my email… My heart started racing; it said ‘Congratulations, you’re invited to join THE Recording Academy.’ I immediately called my daddy first and cried so much before I could get out the words. He thought something was wrong,” she said.

After calming herself down, Shining Rae told her parents the news.

“I felt overwhelmed with joy and cried happy tears randomly throughout the day. It is the top of the list of my career goals next to winning a Grammy, and I felt like this is the biggest stamp to show the world I am legit and a valuable creative in this music business,” she said. “My hard work finally paid off and the Academy believes in me, my voice, and what I have to bring to the world of music. So many people told me it was virtually impossible for me to become a member, especially the Los Angeles Chapter (biggest in the country). (It’s) validation and proof that my steps are ordered by God.”

Watkins said her steps have been ordered by God since childhood. She grew up singing in the choir at Mt. Tabor Missionary Baptist Church.

“I won a Columbia County Fair talent show around 1996 after singing ‘Hero’ by Mariah Carey. I also sung at career fairs at MHS and at SAU for a banquet in high school. I visited MJHS while in college and sung for a 6th grade graduation after being invited by Melissa Eason (former music teacher). I also sung at SAU for the Girls of Promise Conference (sponsored by Women’s Foundation of Arkansas) in 2012 and was the keynote speaker,” she explained.

She graduated as Valedictorian, Student Council President, member of the MHS Homecoming Court, Most Valuable Player in tennis for two seasons and first chair flute in band.

From first grade through middle school, she was always involved with Gifted & Talented programs.

“This allowed me to participate in Quiz Bowl, Odyssey of the Mind and Word Masters Champion,” she stated, adding Mrs. Bonnie Wiley, her high school Language Arts/Literature, was one educator who influenced her the most.

“She was so full of love and sunshine. She recognized my great writing skills early on and always encouraged me. Ironically I became a songwriter,” she said.

From high school, Watkins attended La. Tech, served as a Senator at the College of Applied and Natural Sciences, and founded the La. Tech Chess Team.

Playing chess with her father was one of her favorite things to do while growing up, but making music and singing with her parents (Tyree and Jocelyn Watkins) were the highlights.

“My mom and dad are musicians. Dad played keys in a band and church, and my mom plays guitar. Both sing and once they realized I could sing, they supported me in talent shows and put me in classical piano lessons. I grew up with a home recording studio so my dad taught me as a child around 10 years old how to record, what recording engineering was, how to read music, play keyboard and how to write songs. He was grooming me to master all aspects of music, not just singing,” she said.

“I definitely inherited my musical talents them. But my grandmother Corene, on my mother’s side, was a singer and my great grandmother on my daddy’s side was a piano player. My cousin Spencer Love (AKA 1 Love) is also a rapper in the legendary/Grammy winning hip-hop band Arrested Development. So I have music on both sides of my family,” she added.

“Guitar is my main instrument that I perform with on stage and I use it to record and produce songs,” she said.

As for the name Shining Rae, Watkins said her parents pinned it on her because, “I was always a happy baby full of sunshine.”

Shining Rae has been fortunate be around many “big-name artists,” including Mariah Carey.

“In 2019, my friend and Oscar winning film director, Brett Ratner (director of “Rush Hour”), asked me who my all-time favorite singer was and the next day invited me to dinner. Later that night, he got Mariah to come by and surprise me with a visit. We stayed up all night talking and watching her music videos he directed (including “I Still Believe”) and she asked me to sing for her. I performed acoustic version of ‘Dreamlover’ and she joined in singing with me. The video since went viral,” explained Watkins.

She also met Ray J in 2017 at Chalice Studios in Hollywood and “instantly vibed.” He had been recording background vocals for several of his songs as well as songs by his sister, Brandy. Watkins met Diane Warren (iconic Grammy Award winning songwriter) through an international charity mission.

“They both are phenomenal vocalists and songwriters who were able to write the songtracks to my life. They with you forever,” she said.

“It was amazing. I was seated right behind the stars and had a great view of the stage. One of my friends was there. DJ Cassidy (“Pass the Mic” host). Cutest moment for me was when Cardi B came out with her pregnancy reveal. It beautiful to see so many beautiful successful Black creatives all together in one night and celebrating the best of our culture. The fashion was amazing. Taraji was an awesome host. She is gorgeous and so hilarious,” said Shining Rae.

The most successful song Shining Rae has written – Island/pop song called “Stay” by Iakopo (released in 2019 by Orchard/Sony Music) had 13 million music video streams within the first 10 days of release. Her first single,“Sugar,” in 2011 is still playing on radios in the Ark-La-Tex (KZRB 103.5 FM) and internationally in Japan and the United Kingdom.

As for encouragement to others, Shining Rae said, “I encourage artists to master their crafts but become proficient in all aspects of music. I read/study music business and entertainment law on my own. I learned how to engineer on several common pro software programs (ProTools and Logic) and rent out my own studio space. I also teach voice and guitar lessons, vocal produce and major recording artists, and collaborate with many producers/artists internationally. For me to get the song placements/credits I have each year, I write 150 to 200 songs.”

Watkins said if there’s three words that would best describe her, they would be the following:

Sunshine – “Because I’m full of positivity, fun, and love. I enjoy life to the fullest plus I have a big smile and big personality that lights up any room.”

Anointed – “My entire life has full of unbelievable things. My dreams become reality in the most impossible way to explain. It can only be God and His anointing over my life.”

Songbird – “Music is all of me. I even speak poetically without realizing it until my friends tell me I talk like I’m quoting a song. I’m always told my voice is healing when I sing and perform, and I write hundreds of songs a year. Music kind of spills out of me all the time. It’s like a nightingale or something.”