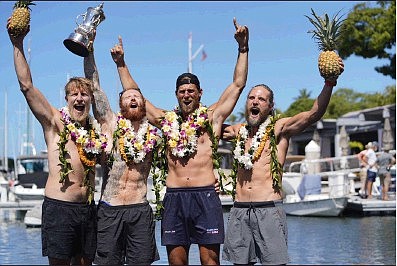 In this photo provided by Great Pacific Race, the Latitude 35 team celebrates as they landed in the Waikiki area of Honolulu after rowing from San Francisco. From left are Jordan Shuttleworth, Angus Collins, Jason Caldwell and Duncan Roy. The team beat the previous race record by more than a week as they completed the 2,400-nautical mile trip in 30 days, 7 hours and 30 minutes. The previous race record was 39 days, 9 hours and 56 minutes. (Mikey Brown/Hawaii Sports Photography/Great Pacific Race via AP)

HONOLULU (AP) — A group of athletes has rowed a boat from San Francisco to Hawaii in record time.

The four-man crew was part of the Great Pacific Race, a rowing competition that pits two- and four-person teams against one another in identical boats on a solitary journey across the open ocean.

The teams live without any direct external support for the duration of the race.

“If you’re a team like us that wants to win a race, break the world record perhaps, you’ve got to keep that boat moving at all times,” Caldwell said. “We did that nonstop without a single break for these 30 days.”

Caldwell said the rowing was the easy part and the two-hour breaks in between were the hardest. That’s when the crew had to find ways to eat, sleep, stay healthy and clean.

“It’s just about maintaining your body,” he said. “You’re sleep-deprived, you’re malnourished, you’re dehydrated. You’ve got sores everywhere, stress-fractured ribs. Everyone’s got ailing injuries and they’re just getting worse and worse and worse. You’re basically trying to hold on. Your body is trying to hold on until you get to the finish line.”

Caldwell’s Latitude 35 racing team beat the previous race record by more than a week when it arrived in Waikiki on Wednesday.

Caldwell holds other rowing records, including for crossing the Atlantic.